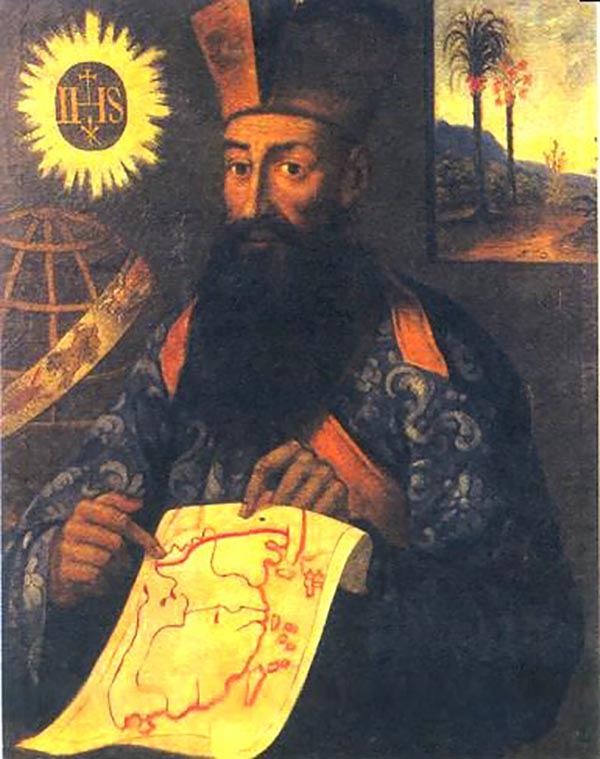 Martino Martini (September 20, 1614 - June 6, 1661) was an Italian Jesuit missionary, historian, and cartographer, working mainly on ancient Imperial China. He is acclaimed as the father of Chinese geographical science, as he was ‘the first to study the history and geography of China with rigorous scientific objectivity. Born in Trento, in the Bishopric of Trent, he finished school in 1631. After finishing school, he entered the Society of Jesus and then was sent to study classical letters and philosophy at the Roman College, Rome from 1634 until 1637. He completed his theological studies in Portugal from 1637 until 1639 and was ordained as a priest in Lisbon in 1639. He left for China in 1640 and arrived in Portuguese Macau in 1642. He studied Chinese for some time following his arrival. He then moved to Hangzhou, Zhejiang Province in 1643, and spent much of his time traveling and gathering scientific information, particularly concerning the geography of the Chinese empire. In April 1644, soon after his arrival in China, the Ming capital Beijing fell to Li Zicheng’s rebels and then to the Manchus. Martini had been allied with the short-lived regime of Zhu Yujian, Prince of Tang, who declared himself the (Southern) Ming Longwu Emperor after the fall of the last legitimate Ming emperor, the Chongzhen Emperor. When Wenzhou, where Martini was on a mission for Zhu Yujian, was about to fall to the Manchus, Martini managed to convince them to allow him to change sides. Before the Manchu troops entered the city, Martini created a large red poster stating, ‘Here lives a doctor of the divine Law who has come from the Great West.’ Below the poster he arranged tables with European books, astronomical instruments, and other objects surrounding an altar with an image of Jesus. The commander of the Manchu troops was so impressed by the display that he politely asked Martini to change sides. In 1651, Martini left China as the Delegate of the Chinese Mission Superior. After a circuitous journey, he reached Rome in the spring of 1655. He carried with him a long and detailed communication from the Jesuit missionaries in China, defending the so-called Chinese Rights(veneration of ancestors and other practices allowed to new Christians). After five months of discussions and debates, the Propaganda Fide issued a degree in favor of the Jesuits, although the controversy did not abate.