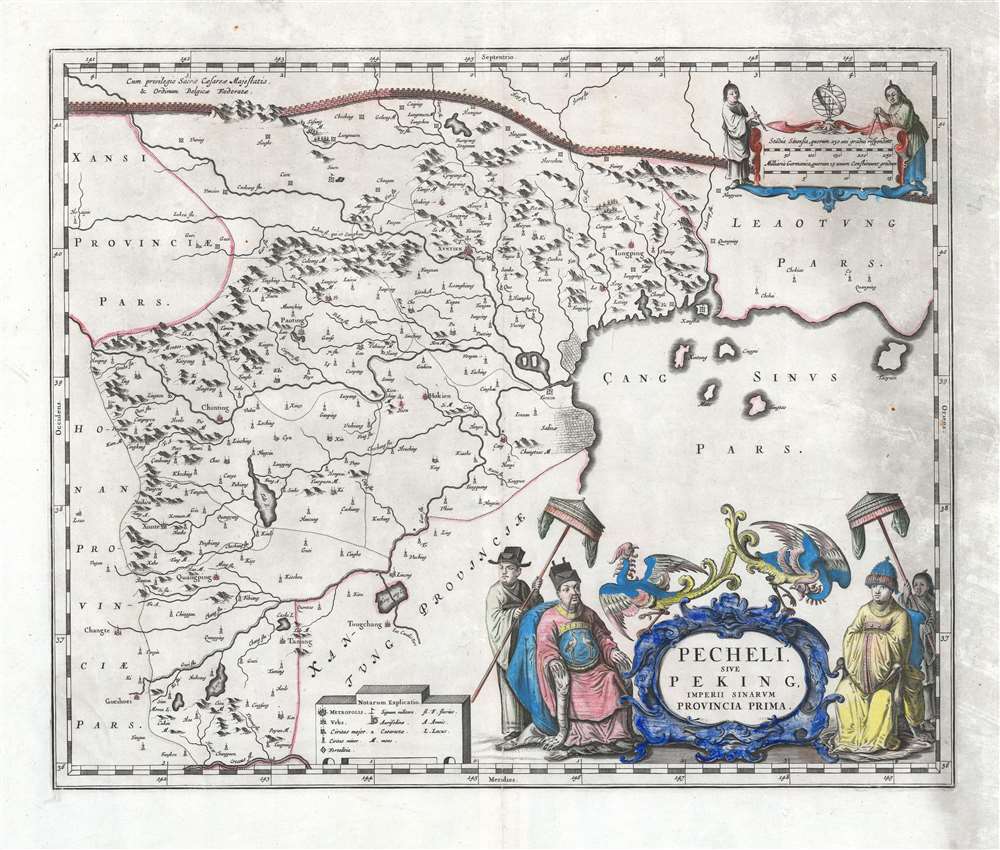 This is Martino Martini's 1655 map of Beijing / Peking vicinity, China, printed by Joan Blaeu for the Novus Atlas Sinensis, considered the first European atlas of China. The work was based on Chinese sources edited by Martini, who spent years in China, and thus was 'far in advance of any previous European work. For the period it was remarkably accurate' (Tooley).

The map focuses on the areas around Beijing, Tangshan, Tianjin, and Baoding, with parts of adjacent Shandong, Henan, and Shanxi. The northern limit is the Great Wall, and to the east the Bohai Sea (Çang Sinus Pars). Features include cities and towns of varying size, fortresses, military posts, rivers, lakes, and mountains. The symbols used are enumerated in an explicatory cartouche at bottom center. Martini marks the Jesuit presence in the cities of Beijing (Xuntien) and Hien with the IHS insignia. In the 'Heng Mountains' on the border with Shanxi, an unnamed gold mine is marked.

Salt of the Earth

The map includes the expansive salt flats on Tianjin's coast. These are one of China's most important sources for salt, and from the 15th century a driving force in the urbanization and commercial development of Tianjin.

The richly-colored title cartouche is surmounted by two pheasants - an auspicious bird - flanked by a Chinese noble and his wife, both shaded under parasols held by servants. The noble's rank is indicated by his bŭzi (補子), or 'Mandarin Square,' a large embroidered badge worn by Imperial officials to indicate rank. Birds, as here, indicated a civil official (e.g. two cranes would indicate a civil official of the highest rank, such as a viscount. On the other hand, a round bŭzi implies an immediate member of the Imperial family (round signified heaven.) However, the Imperial family bŭzi should display a dragon, not a bird; the artist here is getting either the shape of the badge wrong, or the content.)

A secondary cartouche in the upper right, topped with an armillary sphere, gives scales in Chinese and German measurements. It is flanked by two figures in Chinese garb, one applying a calligraphic brush to the cartouche and the other measuring the text with a draftsman's compass.

This map was among those engraved by Joan Blaeu for inclusion in Martino Martini's Novus Atlas Sinensis. Barring some but not all examples of the 1655 Latin and French editions, these maps do not have verso text - including those that were bound into Blaeu's Atlas Maior, so there is no text variation to indicate specific editions. However, the superb watermark visible on this example (depicting Atlas bearing a globe on his shoulders) is mostly associated with the Atlas Maior and so it is reasonable to apply a date of 1662.


Martino Martini (September 20, 1614 - June 6, 1661) was an Italian Jesuit missionary, historian, and cartographer, working mainly on ancient Imperial China. He is acclaimed as the father of Chinese geographical science, as he was ‘the first to study the history and geography of China with rigorous scientific objectivity. Born in Trento, in the Bishopric of Trent, he finished school in 1631. After finishing school, he entered the Society of Jesus and then was sent to study classical letters and philosophy at the Roman College, Rome from 1634 until 1637. He completed his theological studies in Portugal from 1637 until 1639 and was ordained as a priest in Lisbon in 1639. He left for China in 1640 and arrived in Portuguese Macau in 1642. He studied Chinese for some time following his arrival. He then moved to Hangzhou, Zhejiang Province in 1643, and spent much of his time traveling and gathering scientific information, particularly concerning the geography of the Chinese empire. In April 1644, soon after his arrival in China, the Ming capital Beijing fell to Li Zicheng’s rebels and then to the Manchus. Martini had been allied with the short-lived regime of Zhu Yujian, Prince of Tang, who declared himself the (Southern) Ming Longwu Emperor after the fall of the last legitimate Ming emperor, the Chongzhen Emperor. When Wenzhou, where Martini was on a mission for Zhu Yujian, was about to fall to the Manchus, Martini managed to convince them to allow him to change sides. Before the Manchu troops entered the city, Martini created a large red poster stating, ‘Here lives a doctor of the divine Law who has come from the Great West.’ Below the poster he arranged tables with European books, astronomical instruments, and other objects surrounding an altar with an image of Jesus. The commander of the Manchu troops was so impressed by the display that he politely asked Martini to change sides. In 1651, Martini left China as the Delegate of the Chinese Mission Superior. Among the works he brought with him was Lo Hongxian's 1555 revision of Zhu Siben's 1312 manuscript atlas ofthe Chinese Provinces. En route, his ship was captured by the Dutch, who apparently also saw Martini's value: they took him first to Java, and then to Amsterdam, where he arrived in 1654. During this intervening period, Martini had translated the Zhu Siben atlas into Latin, and added his own description of China. The Blaeu mapmaking firm swiftly published Martini's map as Novus Atlas Sinensis, and would later publish Martini's description of China both on its own and within the Blaeu Atlas' text. After his circuitous journey, he reached Rome in the spring of 1655. He carried with him a long and detailed communication from the Jesuit missionaries in China, defending the so-called Chinese Rights(veneration of ancestors and other practices allowed to new Christians). After five months of discussions and debates, the Propaganda Fide issued a degree in favor of the Jesuits, although the controversy did not abate. Learn More...