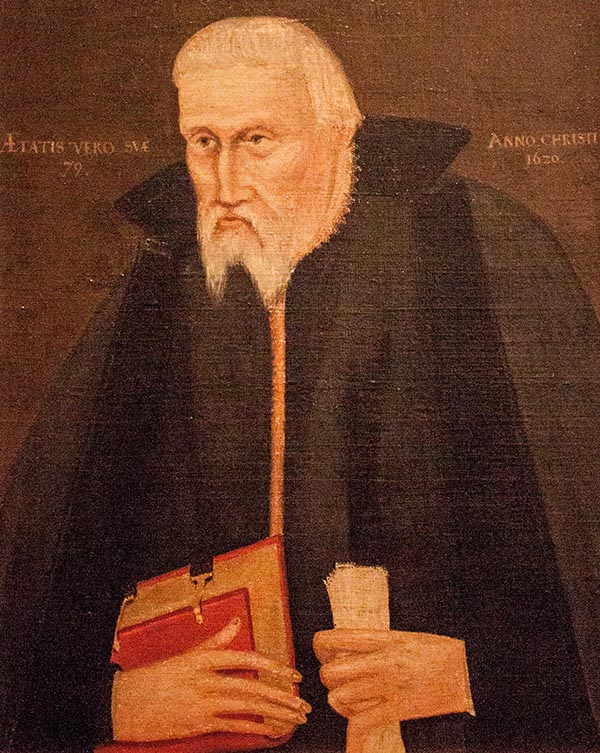 Guðbrandur Þorláksson or Gudbrand Thorlakssøn (c. 1542 - July 20 1627) was bishop of Hólar, Iceland from April 1571 until his death. He was the longest-serving bishop in Iceland. He is known for printing the first complete Icelandic translation of the Bible, and for providing the data for the first accurate maps of Iceland, printed at the end of the sixteenth century by Ortelius and Mercator. He was the son of the priest Þorláks Hallgrímssonar, and Helga Jónsdóttir, daughter of the lawyer Jón Sigmundsson. He studied at Hólar College from 1553 to 1559 before studying theology and logic at the University of Copenhagen: Guðbrandur was one of the first Icelanders to study in Denmark instead of in Germany. He returned to Iceland in 1564 to serve as rector of the Skálholt School before becoming a priest. In 1571 he was named Bishop of Hólar by the Danish King Frederick II; he would serve as bishop of Hólar for 56 years. As bishop, Guðbrandur focused on printing religious works - including hymns, and the Bible - in Icelandic. He printed nearly 100 books - many of which he wrote and translated himself. In addition to cementing the Reformation firmly in Iceland, his efforts to accurately translate these works are credited with fundamentally strengthening the Icelandic language overall.

A well-rounded scholar, Guðbrandur maintained interests in natural history, astronomy, and surveying. He is credited with the drafting of at least one new map of Iceland, upon which the first printed maps of the Island by Abraham Ortelius and Gerard Mercator were based.