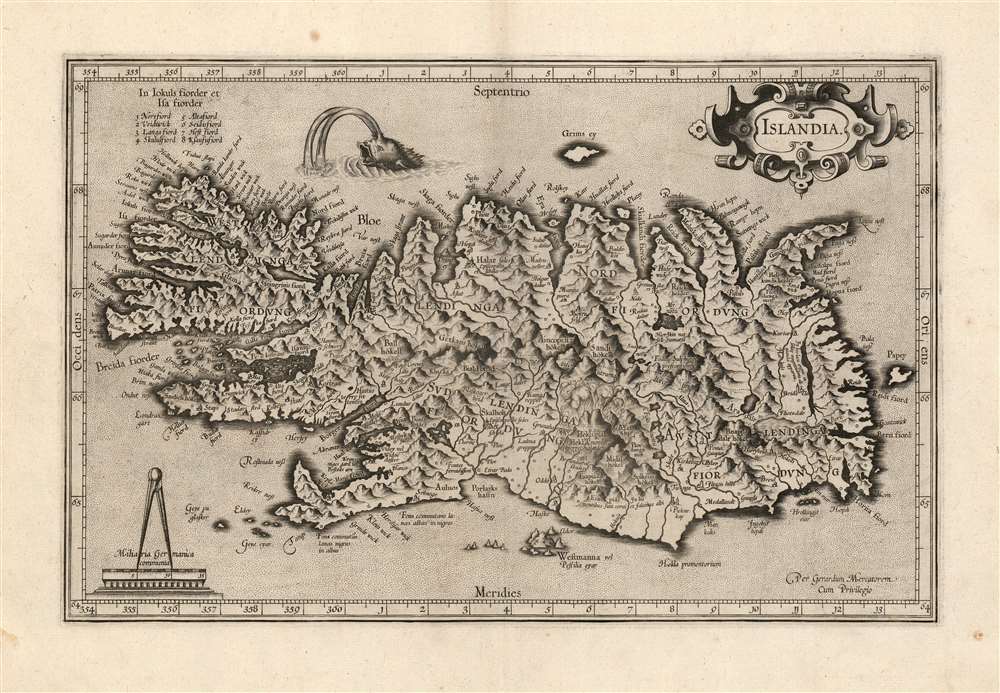 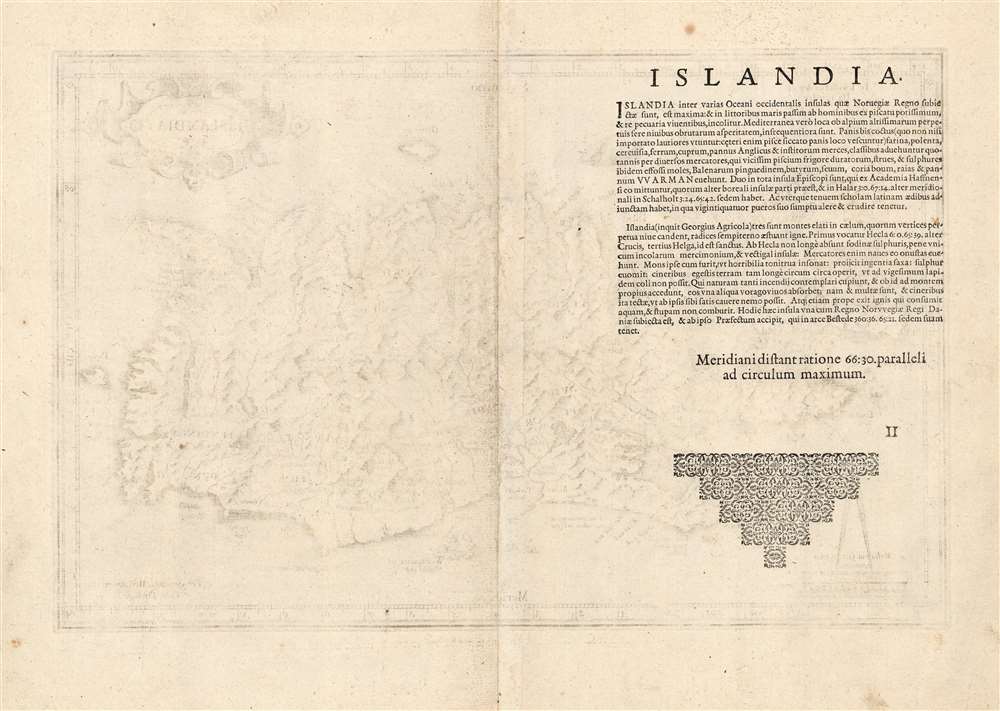 First edition of the the second map of Iceland based on local information.

This is a beautiful strike of Gerhard Mercator's map of Iceland, in a beautiful 1595 first edition example. It is the second map of Iceland to appear in a modern atlas, and the second map overall of Iceland based on data originating from an Icelander, placing it among the first accurate maps of the island. Mercator's map first appeared in 1595, only five years after Abraham Ortelius' famous map; both maps shared the same ultimate source: Guðbrandur Þorláksson, Bishop of Holar.

It is not known if Mercator received this map from Ortelius (the two were friends, so this is possible) but since the map is not a copy of the Ortelius either in detail or decor, it seems unlikely. Mercator's source may, as with Ortelius, have been Danish scholar Anders Sørensen Vedel; a third source, Henrik Rantzau, is also possible. Rantzau was both a politician and a considerable scholar, with whom Mercator is known to have corresponded in the second half of the 1580s. Their correspondence suggests that Rantzau assisted Mercator in acquiring maps from Scandinavia, and while Iceland is not referred to in these letters, it is a likely channel. Vedel and Rantzau were also acquainted, so that encourages the idea that Rantzau might have been the connection to Mercator. Regardless of the channel, it is agreed that the ultimate source of the data for both this and Ortelius' map is the same: while there are many differences between the two, the similarities are too strong to deny that both share an origin in bishop Guðbrandur's work.

Variations between Mercator and Ortelius

The first and second maps of Iceland to appear in atlases do not agree in terms of latitude and longitude, suggesting that this information might not have been included in the data provided to the two mapmakers. Mercator's Iceland is somewhat further to the north than the Ortelius, and it is less wide than the earlier map: in respect to its fjords and mountains, it is less of a caricature than the Ortelius (although both maps overemphasize the island's dramatic topography.) The Mercator is in these respects simpler and more reliable than its predecessor. The map shows a good understanding of Iceland's populated centers, but uninhabited areas - the interior highlands and main glaciers, for instance - are ignored or compressed. Rivers, also, are mainly accurate but only near populated areas. It also contains more place names than Ortelius' map - although many of these do not appear to originate with bishop Guðbrandur.

This map is among the most decoratively engraved of Mercator's atlas maps; Mercator himself was an accomplished engraver, and those maps that had been completed and added to the 1595 Atlas were for the most part done by his hand. This map's stippled oceans, dramatic pictorial mountains, and neat variation between Roman and Italic lettering are hallmarks of Mercator's engraving. A sea monster - judging by the spouts, based on whale sightings - breaks the surface of the water to the north. Iceland's mount Hekla is shown erupting massively. In fact, it exploded violently in 1510 (VEI 4) and was notorious even on the mainland, thought to be a literal gate to Hell. Also named are some of the country's other famous volcanoes, such as Eyjafjallajökull (here spelled Eiapiallahokel) which erupted in 2010. The absence of the currently-erupting volcano on the Reykjanes Peninsula, Fagradalsfjall, is not a surprise: the 2021 eruption is the first of that volcano to occur in recorded history.

This map was engraved at some point prior to the 1595 edition of Mercator's Atlas sive Cosmographicae, and was included in editions of the Mercator/ Hondius atlas until 1633, at which point it was replaced with an updated map. The typography of the verso text conforms to examples of the 1595 first edition of the atlas. The separate map is well represented in institutional collections, but strong examples are becoming scarce on the market.


Guðbrandur Þorláksson or Gudbrand Thorlakssøn (c. 1542 - July 20 1627) was bishop of Hólar, Iceland from April 1571 until his death. He was the longest-serving bishop in Iceland. He is known for printing the first complete Icelandic translation of the Bible, and for providing the data for the first accurate maps of Iceland, printed at the end of the sixteenth century by Ortelius and Mercator. He was the son of the priest Þorláks Hallgrímssonar, and Helga Jónsdóttir, daughter of the lawyer Jón Sigmundsson. He studied at Hólar College from 1553 to 1559 before studying theology and logic at the University of Copenhagen: Guðbrandur was one of the first Icelanders to study in Denmark instead of in Germany. He returned to Iceland in 1564 to serve as rector of the Skálholt School before becoming a priest. In 1571 he was named Bishop of Hólar by the Danish King Frederick II; he would serve as bishop of Hólar for 56 years. As bishop, Guðbrandur focused on printing religious works - including hymns, and the Bible - in Icelandic. He printed nearly 100 books - many of which he wrote and translated himself. In addition to cementing the Reformation firmly in Iceland, his efforts to accurately translate these works are credited with fundamentally strengthening the Icelandic language overall.

A well-rounded scholar, Guðbrandur maintained interests in natural history, astronomy, and surveying. He is credited with the drafting of at least one new map of Iceland, upon which the first printed maps of the Island by Abraham Ortelius and Gerard Mercator were based. Learn More...

Mercator, G., Atlas sive Cosmographicae, (Amsterdam: Mercator) 1595.     Mercator's Atlas is one of the most important works in the history of cartography. Although in fact Ortelius was the first to publish a proper atlas, the Teatrum Orbis Terrarum, Mercator's Atlas the first book to employ the term Atlas for a collection of maps. The term is derived both from the mythical titan, Atlas, who was forced to bear the world upon his shoulders, and the Libyan king, philosopher, and astronomer of the same name that, so the legend goes, constructed the first globe. Mercator dedicated the final 25 years of his life to compile the Atlas. He published two parts during his lifetime in 1585 and 1589, but the final part published posthumously by his son Rumold Mercator, in 1595. The map plates for the Atlas were later acquired by Jodocus Hondius who published the most complete and well known edition in 1606. It was Jodocus who popularized the Atlas and who did the most to elevate Gerard Mercator's work.

Excellent. Light soiling in margins. Else fine with generous margins and a bold, sharp strike.