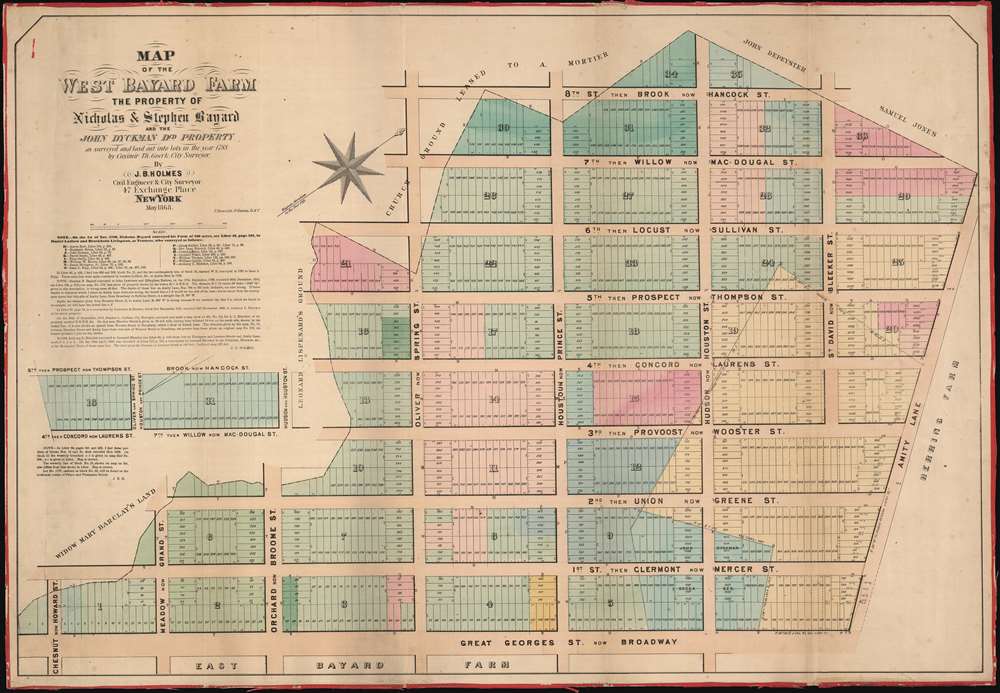 This is one of John Bute Holmes's 1866 cadastral maps of the western part of Soho, one of New York City's most interesting and vibrant neighborhoods. These lands were once part of the West Bayard Farm. The map covers from Howard Street to Amity Lane and from Broadway to 8th Street, including some of Manhattan's most iconic streets: Bleeker, MacDougal, Sullivan, Thompson, Green, Mercer, Spring Street, Prince Street, Broome Street, and Grand Street, among others. It employs color coding, overprinting, and an alpha numeric system, to identify both old property lines dating to the earliest days of Manhattan's development and modern street grid and property lines compliant with the 1811 Commissioner's Plan.

The map shows the 100-acre farm of Nicholas and Stephen Bayard, which was in their family in the 17th century. As noted on the map, the land passed to Daniel Ludlow and Brockholst Livingston, as trustees, in 1789, they conveyed the land to several individuals (Aaron Burr among them). The present map covers the west section of the farm; Holmes made an accompanying map of the east section, which we have also handled, as part of the same collection.

Holmes based this map on the survey work of Casimir T. Goerk, the famed city surveyor behind the Commissioners Plan. It was engraved by Thomas Bonar, Nassau Street. The map exists in only one edition, as here, published in 1868. It is of considerable rarity. The OCLC identifies only 2 examples: at Princeton and the New York State Library. Although uncatalogued, we believe the New York Public Library may have an example. There is at least one other example in private hands.


Thomas Bonar (1820 - May 19, 1891) was a New York City engraver and lithographer active in the second half of the 19th century. Bonar was born in Edinburgh, Scotland. He is described as 'the handsomest man to be seen in New York,' notable for his exceptional height, long white hair, and erect posture (Brooklyn Daily Eagle, May 20, 1891). He emigrated to New York City around 1847, which also corresponds to the earliest records of his work. From 1860 to 1863 worked for the New York Herald, producing engravings and 'war maps' illustrating Civil War events. He later worked for the Telegraph and the Tribune. In 1850, his work is associated with the firm of 'Bonar and Cummings', who produced engravings for the Methodist Book Room and Methodist Magazine. He retired from the lithography business around 1886 to devote himself to home life, travel, and the New York Press Club, of which he was an honorary member. He was also an active supporter of the Temperance Movement. Bonar maintained offices at 87 Nassau Street but lived in Brooklyn at 173 Taylor Street. Learn More...