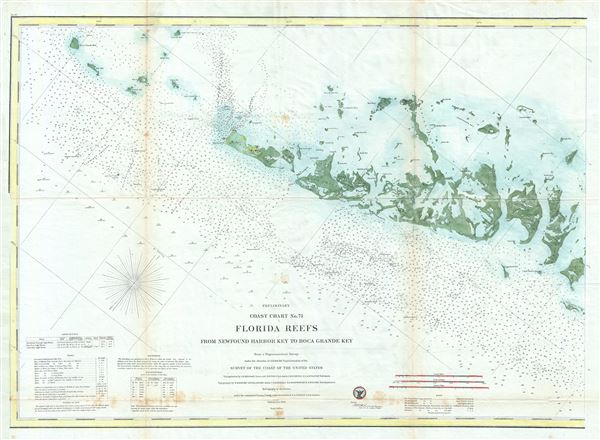 This is a very attractive example of the rare 1859 U.S. Coast Survey Map the western Florida Keys. Centered on Key West, this map covers from Ramrod Key and Newfound Harbor Key in the east to Boca Grande Key in the west. All of the Islands are named but only Key West shows any inland development. There are countless depth soundings throughout and various channels and shoals are noted. The triangulation for this chart was completed by J. E. Hilgard, Jas. Totten, J. Rockwell, and J. A. Sullivan. The topography is the work of R. M Bache, L. Hull Adams, C. T. Jardella, S. A. Wainwright, and T. W. Door. The hydrography was accomplished by John Rodgers and T. A. Craven. The whole was completed under the direction of A. D. Bache, one of the most influential and prolific Superintendents of the U.S. Coast Survey. Published in the 1859 edition of the Superintendent's Report to congress.

Very good. Minor wear and toning along original fold lines. Some spotting, especially near bottom folds. Left margin missing.
Looking for a high-resolution scan of this?