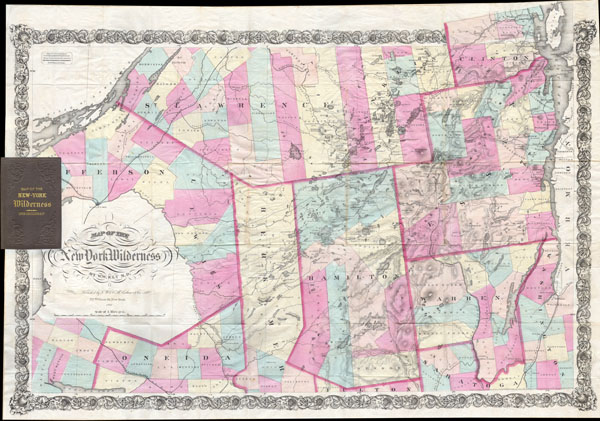 A rare first edition (1867) of William Watson Ely's map of New York's Adirondack Mountains. Covers from the St. Lawrence River to Lake Champlain inclusive of the counties of St. Lawrence, Clinton, Essex, Hamilton, Warren, Herkimer, Jefferson, Lewis, and Oneida. The whole is surrounded by an elaborate decorative vine motif border. Printed by G.W. and C. B. Colton of 172 William Street, New York. Upper left corner features an advertisement for other Colton maps. The copyright in the lower right hand corner reads 'Entered according to Act of Congress in the Year of 1867 by G.W. and C. B. Colton & Co in the Clerks Office of the District Court of the United States for the Eastern District of New York.'

With its lush wilderness, rich wildlife, and plethora of lakes and rivers, the Adirondack Mountains were a popular sporting and fishing destination for much of the 19th century. As early as the 1850s it was a favorite stomping ground for such luminaries as James Russell Lowell, Louis Agassiz, and Ralph Waldo Emerson. Nonetheless, it wasn't until 1867 that a reliable map of this region appeared. The Adirondacks' rugged rurality, lakes, mountains, and rivers proved a daunting obstacle for 19th century surveyors and cartographers. The work of Rochester physician and enthusiastic Adirondack sportsman W.W. Ely finally opened up this region cartographically. This map, the product of Ely's efforts and experience, was praised by his successor Wallace:

To Dr. W. W. Ely, as the pioneer in recording these unmapped portions, and making reasonably plain to those who should follow the devious windings of stream and trail, is due to the gratitude of thousands who have acknowledged the benefit derived from his valuable map of 'the New York wildness,' which, up to the present time, has been the only one worthy of name as such.

And indeed Dr. Ely produced a magnificent map. Spacious in size and with a focus on detail, this map notes roads, paths, lakes, rivers, rapids, mines, waterfalls, villages, lodges, and farmsteads thought the region. As the first reasonably accurate map of the Adirondacks, 'the New York Wilderness' enjoyed an immediately popularity and was subsequently published in a similar state for the next two years. Afterwards, the map was reduced, redrawn, and reissued in a smaller borderless format entitled 'New York Wilderness and the Adirondacks.'