1774 Benard / Carteret Maps and Charts of the Admiralty Islands 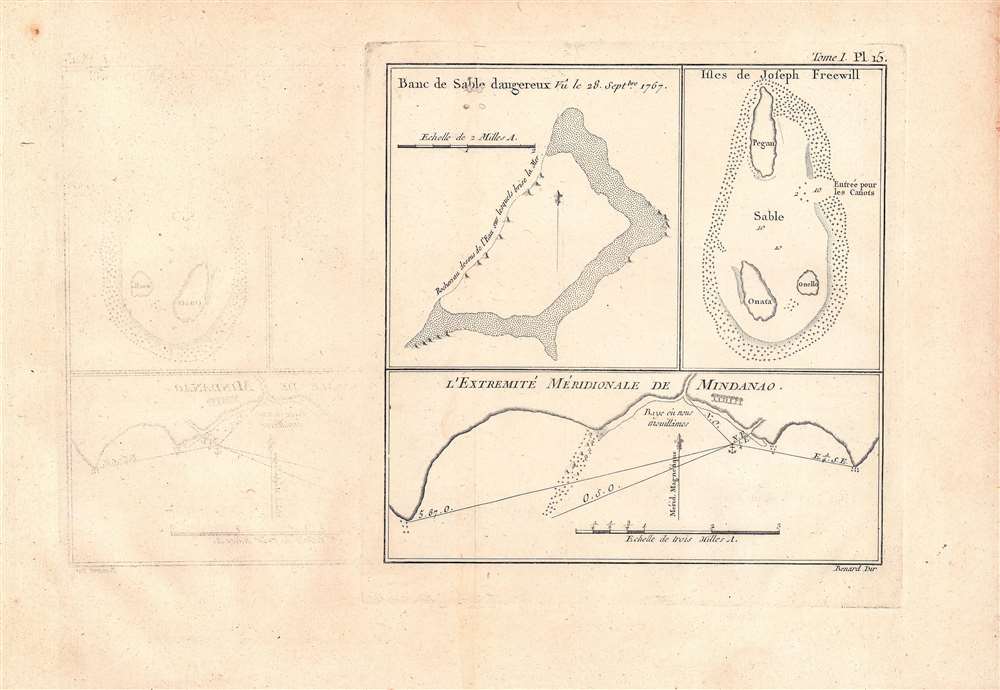 1774 Benard / Carteret Maps and Charts of the Admiralty Islands

Early maps of features in the western Pacific.
$125.00

Three maps on a single sheet. The map detailas geographic features encountered in the western Pacific during a 1766 - 1769 British voyage of circumnavigation captained by Philip Carteret. They were engraved by Robert Benard and published in the 1774 French translation of John Hawkesworth's An Account of the Voyages…, a very popular work which helped publicize British discoveries in the Pacific.

The areas depicted include an unnamed sandbank, described in the text to be 'a dangerous shoal' at about 2º '53 N and 136º '10 E, off the northern coast of New Guinea, the Joseph Freewill Islands (Mapia Atoll, Kepulauan Mapia), also just north of New Guinea, and the southernmost portion of Mindanao. They accompanied the section of Hawkesworth's text documenting the daily progress of the voyage of Philip Carteret, commanding the HMS Swallow, on a 1766-1769 circumnavigation of the globe that travelled through the southern and western Pacific.

This map was based on a drawing by Philip Carteret and engraved by Robert Benard. It appeared as Plate 15 in Volume 1 of Relation des voyages entrepris par ordre de Sa Majesté Britannique, actuellement regnante, pour faire des découvertes dans l'hémisphère méridional, a 1774 French translation of the English-language book An Account of the Voyages… published the previous year by John Hawkesworth. The map is only independently cataloged in the holdings of the National Library of Australia, while Hawkesworth's entire text is more widely distributed in institutional holdings, though somewhat less so in the French translation.


Philip Carteret, Seigneur of Trinity (January 22, 1733 - July 21 1796) was a British naval officer and explorer who participated in two of the Royal Navy's circumnavigation expeditions in 1764–66 and 1766–69. He served as a lieutenant aboard HMS Dolphin under Byron during his voyage of circumnavigation from June 1764 to May 1766. Later that year he was made commander and given the command of HMS Swallow to circumnavigate the world, as supporting HMS Dolphin under the command of Samuel Wallis. The two ships were separated after passing through the Strait of Magellan, but Carteret continued his circumnavigation aboard Swallow. During the voyage he discovered both Pitcairn Island and the Carteret Islands, which were subsequently named after him. In 1767, he discovered a new archipelago inside Saint George's Channel between New Ireland and New Britain Islands, and rediscovered the Solomon Islands first sighted by the Spaniard Álvaro de Mendaña in 1568, and the Juan Fernández Islands first discovered by Juan Fernández in 1574. Learn More...

Good. Noticeable offsetting. Wormholes in title of map at top-left.