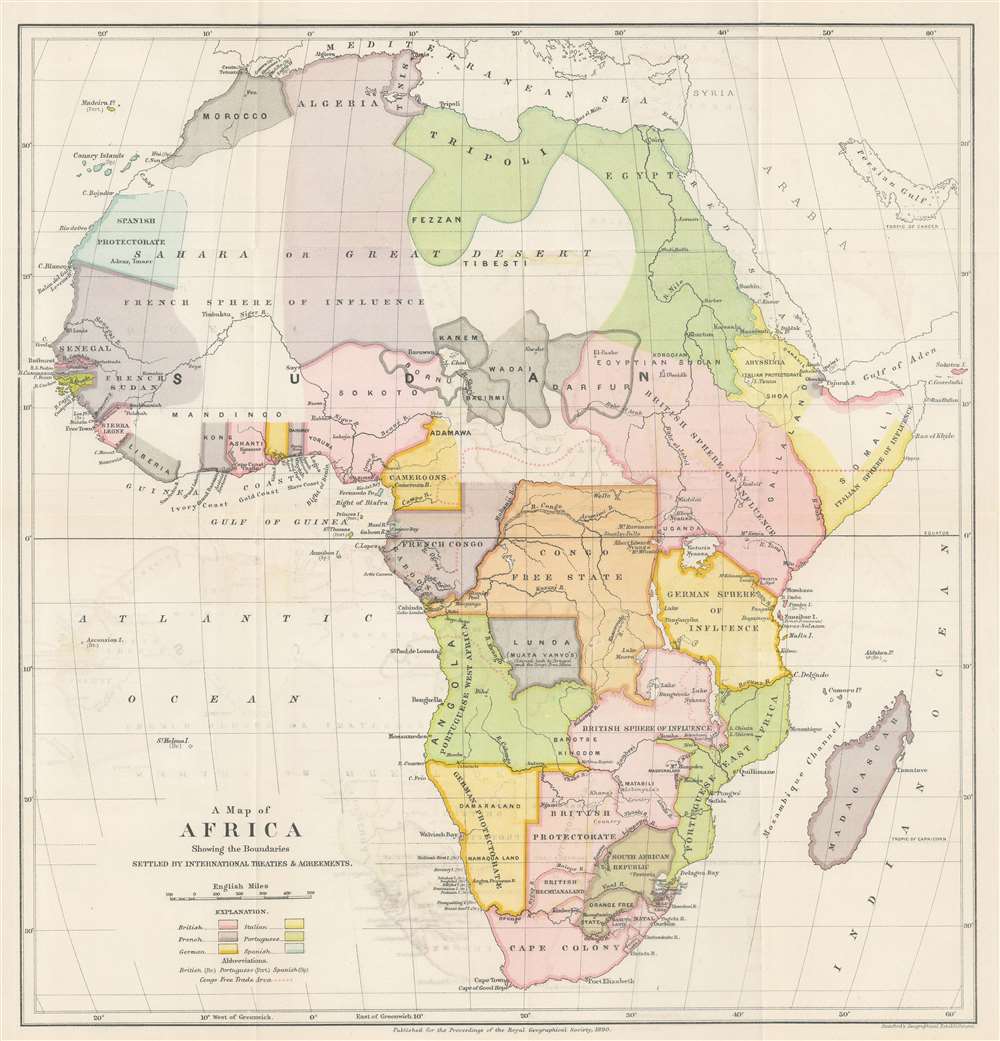 Partition of Africa as it happened.

This is an 1890 Edward Stanford and Royal Geographical Society map of Africa. The map was created as a visual summary of the international treaties and agreements governing the partition of Africa by the European powers. Various colors correspond with different European spheres of influence: British territory is pink, while French territory is purple, etc. Portuguese, Italian, German, and Spanish claims are also delineated. 'Independent' nations supposedly free of European influence / suzerainty are colored black. The Congo Free State, which roughly corresponds with today's Democratic Republic of the Congo, is shaded orange and is not referenced as being claimed by any specific country as it was personally owned by King Leopold II of Belgium.

Per the Royal Geographical Society

The map is explained in these terms by the accompanying article published in the Proceedings of the Royal Geographical Society, November 1890:

Now that the greater part of Africa has been parcelled out among the European Powers, it may be useful to indicate what the limits of the claims of each of these powers, and on what these claims are based. It has been sought to show in the accompanying map the boundaries of the claims of the various Powers, so far as these have been settled by international agreement. Where the space has been left blank it is because there is no express agreement, or the limits have been left vague intentionally by the Powers concerned, or the particular districts are so far independent. An unbordered wash of colour is intended to signify that the area indicated is left to the undisputed operations of one Power.

The map is an artifact of the 'Scramble for Africa,' the series of late 19th and early 20th century occupations, usurpations, annexations, divisions, and land seizures by European powers in Africa. The Scramble for Africa was mainly characterized by heightened occupation and direct ownership of colonial lands. Rivalries and treaties led to a number of new African states, many of which remain, but few of which paid heed to traditional boundaries or cultural distinctions. The Scramble culminated in the Berlin Conference of 1884, wherein European colonization of Africa was made official and the doctrine of Effective Occupation introduced.

The 1884-85 Berlin Conference was a meeting of colonial powers in Berlin during the New Imperialism Period. The resultant 'General Act of the Berlin Conference' is considered to be the formalization of the 'Scramble for Africa', wherein much of Africa was partitioned between major European powers (with little regard to the claims and priorities of the indigenous peoples). In order to claim territory, the delegates needed to prove 'effective occupation.' This means they needed to establish the existence of treaties with local powers, show that their flags were being flown, or have active forts in the region. The conference marked a major change in the European approach to Africa. Initially European powers treated African peoples much like Native Americans, establishing trading relationships and alliances with indigenous kingdoms. After the Berlin Conference, heightened colonial activity and the need to prove effective occupation led to the subjugation of most indigenous control.