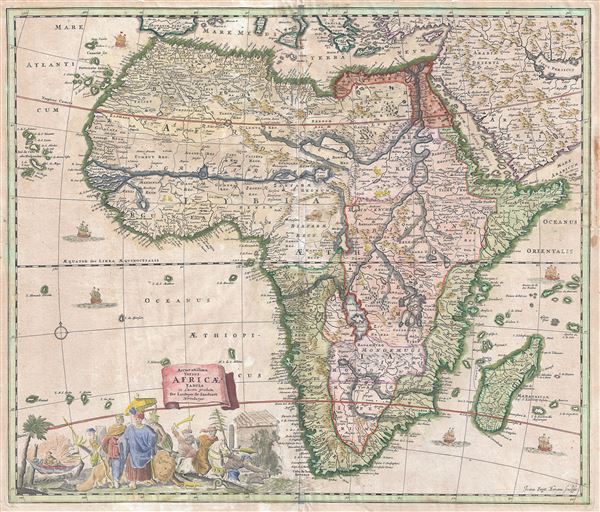 One of two earliest known maps engraved by Homann - long before he opened his own firm.

An uncommon map, this is Jacob Sandrart's 1697 map of Africa. The map covers the continent in full as well as the adjacent parts of Araba, Europe, and the Cape Verde and Canary Islands. The Prime Meridian runs through Ferro Island. Cartographically Sandrart has followed the DeWitt model of 1660. Both maps, as was standard during prior to explosion of African exploration in the 19th century, Sandrart relies heavily on Ptolemy to populate the interior - including rendering the speculative sources of the White Nile in two great inland lakes, Zaire Lacus and Zatlan Lac.

The elaborate decorative cartouche in the lower left quadrant bears some attention. The cartographer intended the cartouche to illustrate the flora, fauna, and cultures of Africa - at least as they were perceived by Europeans of the period. The cartouches shows tribal leaders arrayed in opulent splendor while lounging on a lion with fat tailed sheep and Arabian steeds in the background. A hapless captive appears about to be beheaded in a river while and snakes and lizards abound.

This is notably one of only two known maps engraved by Johann Baptiste Homann before 1700, thus very early in his career and some 12 years prior to founding his own legendary publishing house. Homann's imprint appears in the lower right quadrant. This map was never published in an atlas, but was rather sold separately and tipped into various composite atlases. Consequently it has been very difficult for scholars to date. Here we are following Betz, who date it c. 1697 to correspond with Sandrart's other work.