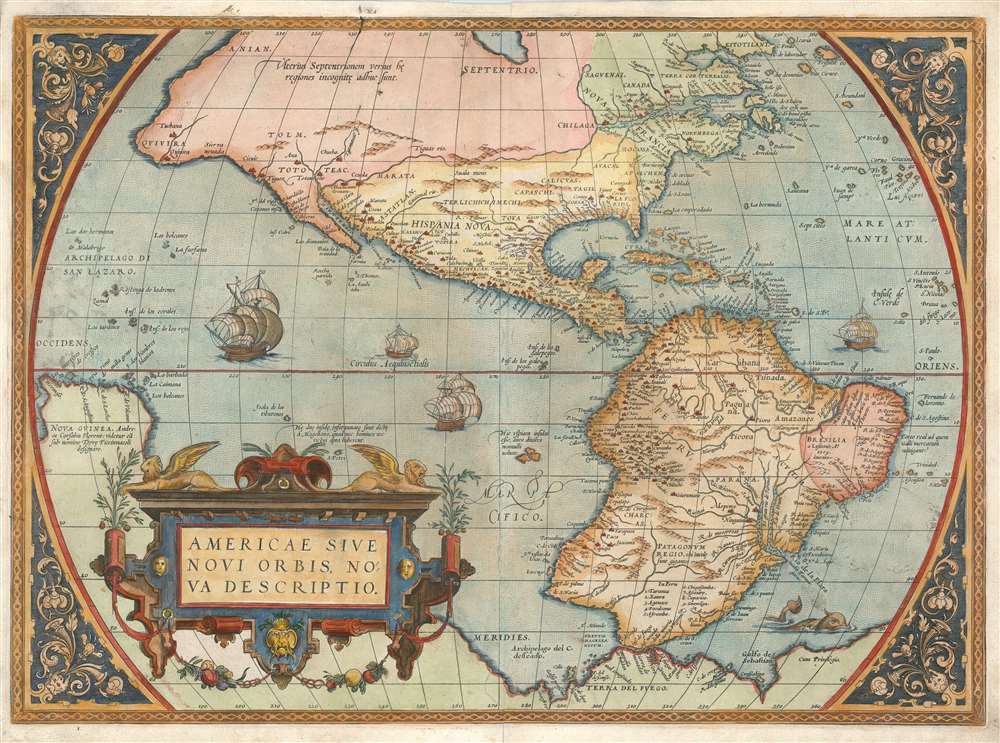 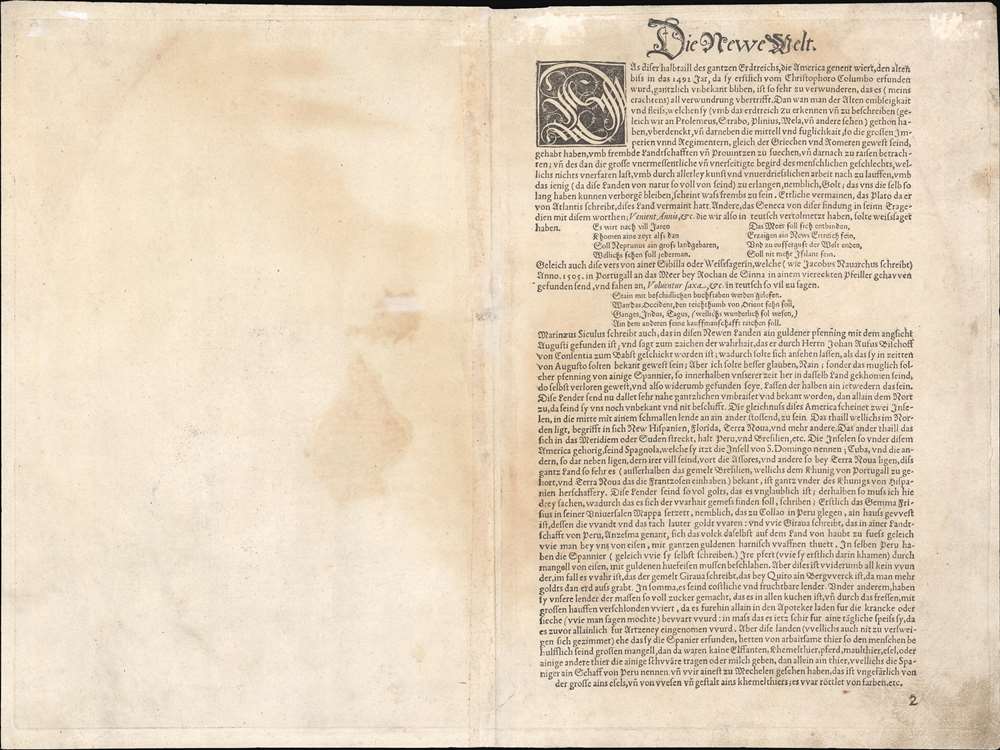 This is Abraham Ortelius' map of the Western Hemisphere, considered to be the 'first map of the Americas to appear in a modern atlas' (Schwartz). Ortelius' success and the spread of his atlas made this fine map the standard - and best - representation of the Americas during the initial period its colonization.

Given how recently the Western Hemisphere had come to the attention of European scholars, the outline of the continent is remarkably accurate and recognizable. The American Northeast is dominated by Nova Francia and the St. Lawrence, showing evidence from Cartier's voyages. The Caribbean and eastern South America are shown with remarkable accuracy. Beyond the Strait of Magellan Tierra del Fuego appears not as an island but as part of a massive southern continent, the apocryphal Terre Australis, extending all the way to New Guinea. The Pacific Ocean itself appears optimistically far narrower than its actual width, with New Guinea appearing south of Quivira and the strait of Anian. The Pacific coast exhibits significant distortion both in North and South America. The Chilean coast features the 'Potato-shaped' bulge also found on Mercator's map. In Mexico and the Southwest, Coronado's placenames of Ceuola, Tiguex and Quivira appear. Peru and the Rio de la Plata are well-detailed, although the size of the latter is exaggerated.

The general shape of the continent and many of its details were drawn from those appearing on Ortelius' friend and fellow mapmaker Gerard Mercator's massive (and unobtainable) 1669 world map. Much of the fine detail was derived from Spanish sources - itself a remarkable accomplishment, as the Spanish and Portuguese were notoriously close-lipped regarding their discoveries in the New World. These sources are nameless - but the sharp detail within the Spanish sphere gives the game away. The Pacific coast, Mexico, the Caribbean and the Gulf, and South America all reveal detail from a source familiar with the Spanish explorations.

In addition to its revealing detail, Ortelius' map is a beautiful work, exhibiting the master engraving of Franz Hogenberg. Ships sail the stippled oceans, and a sea monster prowls the South Atlantic. The garlanded, strapwork cartouche is surmounted with winged lions. The map's typography is clear and legible throughout.

Americaewas among the fifty-three maps appearing in the very first 1570 edition of the Theatrum and versions of the map appeared in every subsequent edition until the last, 1624. The copperplate was replaced twice during this run, and each of the three plates experienced some revision during this extraordinarily long print run. This first plate was used until 1575, approximately 1750 copies having been printed. Some 225 of these belonged to the 1572/3 German text edition, with which this example corresponds. Examples of various editions of this map are well represented in institutional collections. The German edition of the Theatrum is catalogued in 13 libraries in OCLC.