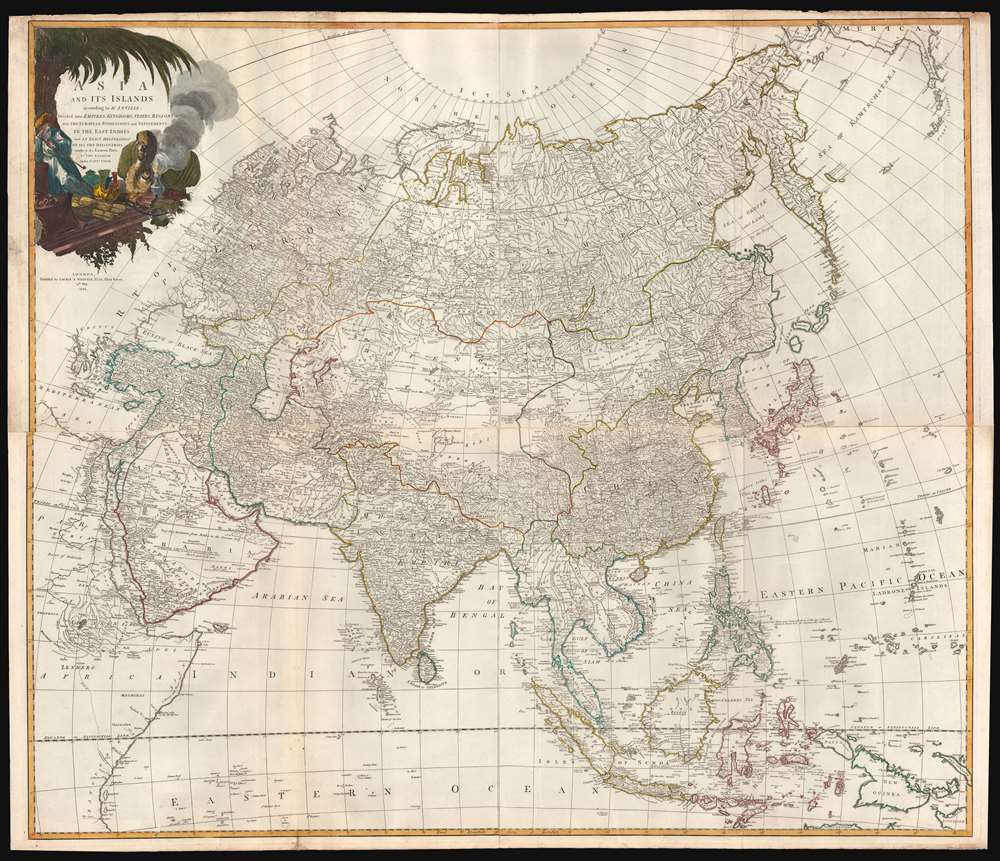 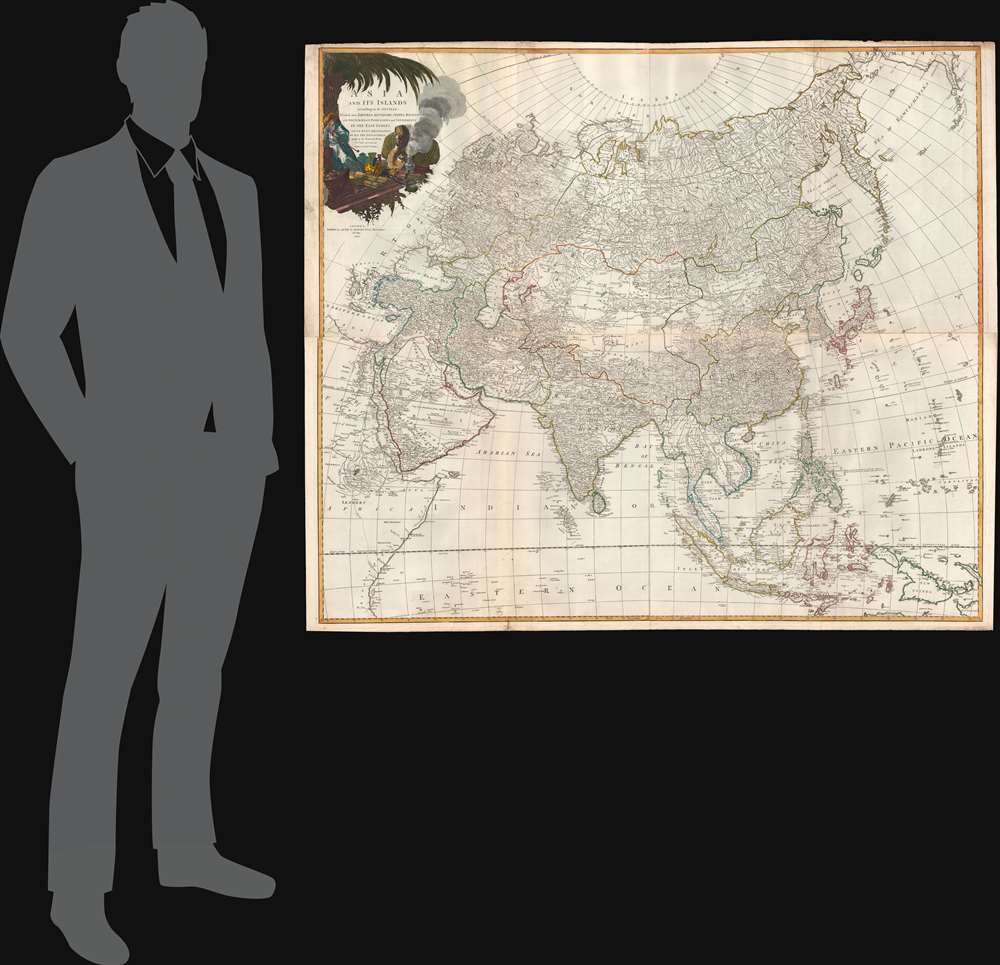 An absolutely stunning and monumental 1794 wall map of Asia by Laurie and Whittle. The map covers the entire continent of Asia, including Arabia, the Indian subcontinent, and the East Indies. Laurie and Whittle derived their basic cartography from the work of French mapmaker Jean Baptiste Bourguignon d'Anville. Throughout, countless cities, caravan routes, and geographical features such as islands, undersea shoals, oases, lakes, rivers, and mountains are identified. In Siberia and East Asia, the mappings of Cook, Bering (including Behring Island, where he died) and Tschirikow are much in evidence. Throughout the cartographer has provided copious fascinating notes and annotations.

This map is exceptionally interesting for its detailed work in Central Asia - a little-known and largely unmapped region at the time. The cartographer attempts to notate various historical sites throughout. For example, in the Gobi desert, he identifies, albeit speculatively, the site of Karakarian or Karakorum, the ancient capital of the Mongol Empire, 'Hereabout stood the City of Karakarin or Holin, the ancient Seat of the Monguls Empire'. In a similar vein, he also identifies the ruins of various temples and palaces in Tartary.

Southeast Asia and the East India Islands are mapped after earlier Dutch maps with only speculative commentary on the interior. Kingdoms of Pegu (Burma), Siam (Thailand), Tonkin and Chochin (Vietnam), and Camboja (Cambodia) are named. Further south, the Straits of Malacca are noted, as are the Straits of Singapore. Singapore Island, though not identified, is recognizable.

Korea or Corea is present, if misshapen, in roughly the correct location. The sea between Japan and Korea, whose name, the 'Sea of Korea', 'East Sea', or the 'Sea of Japan,' is here identified in favor of Korea (Gulf of Corea). Historically, Korea has used the term 'East Sea' since 59 B.C., and many books published before the Japanese annexed Korea make references to the 'East Sea' or 'Sea of Korea'. Over time, neighboring and western countries have identified Korea's East Sea using various terms. The St. Petersburg Academy of Sciences referred to the East Sea as 'Koreiskoe Mope' or 'Sea of Korea' in their 1745 map of Asia. Other seventeenth and 18th century Russian maps alternate between 'Sea of Korea' and 'Eastern Ocean'. The 18th century Russian and French explorers Adam Johan von Krusenstern and La Perouse called it the 'Sea of Japan', a term that became popular worldwide. Nonetheless, the last official Russian map names the East Sea, 'Sea of Korea'. The name is currently still a matter of historical and nationalistic dispute between several countries.

An elaborate allegorical title cartouche in the upper left depicts a bearded, possibly Ottoman, trader with his goods, an incense burner, and a camel beneath a palm tree - the whole evocative of the mystique of the orient.

This map was printed on four sheets, which were then joined by the publisher. Published by Laurie and Whittle as plate nos. 26-27 in the 1797 edition of Thomas Kitchin's General Atlas.