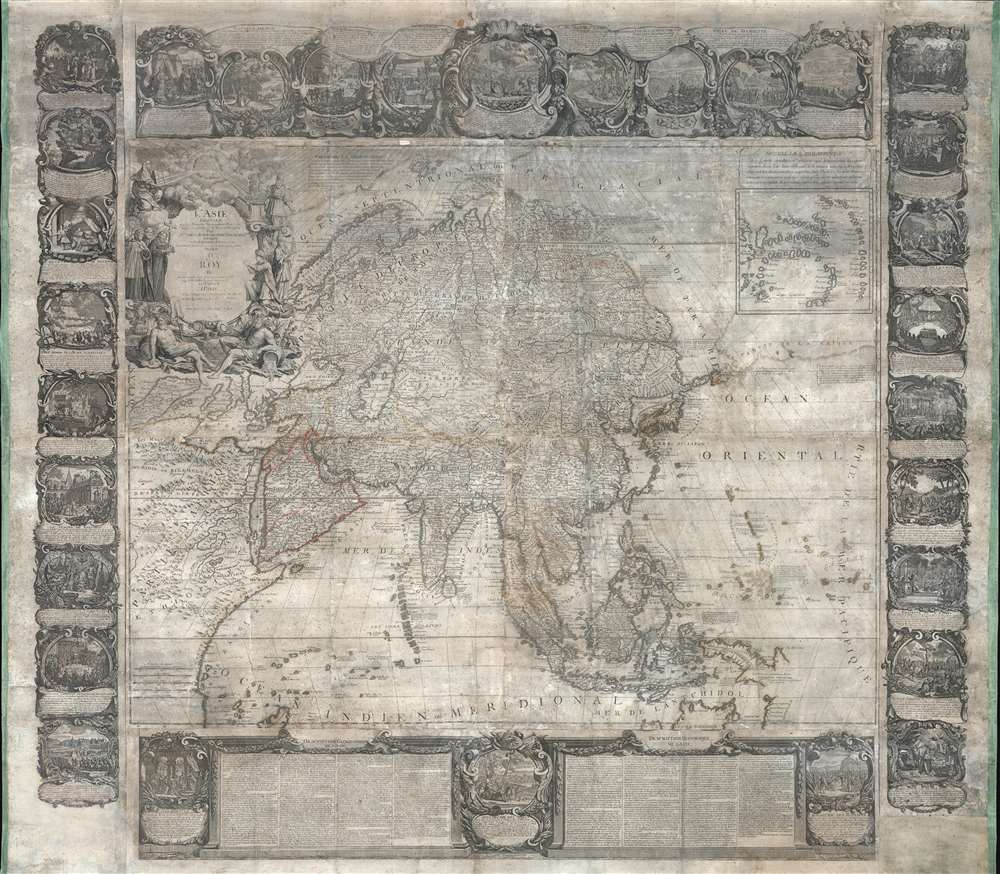 An impressive and rare 1749 decorative wall map of Asia by Jean-Baptiste Nolin. Cartographically the map is based upon the work of Nolin’s father of the same name. It extends from the Mediterranean to New Guinea and the Japanese Kuril Islands, and from Spitzbergen to Northern Australia. The map is surrounded by elaborate decorative imagery including 30 decorative vignette medallions drawn from Greek, Roman, Jewish, Christian, and Islamic history. The extensive text along the lower margin features a Description Géographique de l'Asie. In the upper left corner, an especially resplendent cartouche illustrates Jesuit priests evangelizing to the diverse peoples of the continent.

While exhibiting extensive confidence and detail throughout, this map is heavily speculative with regards to unexplored territory. Greenland, for example extends eastward north of Spitsbergen almost as far as Nova Zembla, which itself is attached to the Asiatic mainland. India is exceptionally narrow on the c. 1690 Sanson model.

The sea between Japan and Korea, whose name, either the 'Sea of Korea' 'east Sea,' or the 'Sea of Japan,' is currently a matter of historical and political dispute between the countries is here identified in favor of both countries, with both 'Mer et Golfe de Coree' and 'Mer Septentrionale du Japon' applied to the same sea.

The map’s most speculative sections are in East and Northeast Asia, where, despite being issued after the explorations of Vitus Bering, the cartography here dates to about 1740, due to the fact that Bering’s information was not yet widely available outside of the Russian Academy of Sciences. Instead, the cartographer relies on early Dutch records relating to the voyage of Maerten de Vries and Cornelis Jansz Coen. Here modern day Hokkaido (Terre d’Yesso), the southern parts of which are vaguely recognizable, is attached to the Yupi peninsula (Sakhalin). Several islands extending to the northeast, represent Vries and Coen’s discovery of the Japanese Kuril Islands of Kunashir (mapped somewhat accurately) and Iturop. Vries and Coen’s mapping of Iturop does not extend beyond the western shores, so the eastern part of the island remains blank. Some cartographers of the period attached Itruop to a larger land maps identified as ‘Terre de Gama.’ Gama, in this case refers to the Portuguese explorer João da Gama (c. 1540 – after 1591), grandson of Vasco de Gama, who reportedly crossed the North Pacific in the 1580s, in the process mapping some of the Kuril Islands, possibly some of the Aleutians, and potentially even part of the American Coast. Gamaland was subsequently mapped speculatively on many maps. The reality of Gamaland, as presented here by Nolin, is probably a mismapping of several of the Aleutian Islands as a single landmass attached to the American mainland. Here that landmass, identified as ‘Partie de L’Amerique’ is ghosted in suggested a tenuous state of discovery.

Just to the north of these islands the Amur River (Yaniour) exhibits a particularly fiery and virulent outflow into the Arctic – suggesting impassibility. The Amur river was explored by the Russian Cossack expedition of Vassili Poyarkov in 1643–44. The Cassocks established the fort of Albazin on the upper Amur, mapped here, at the site of the former capital of the Solons. When this map was issued, the fort has fallen under the control of the Chinese.

Far to the norther there is an unusual projection into the Arctic generally known as Witsen’s Peninsula. This oddity appears on numerous maps dating from the late 17th and early 19th century. It is a legacy of Peter the Great's obsession over the search for a Northeast Passage. Around 1648 the Cossack Semen Ivanovich Dezhnyov (1605 - 1673) put together a rough and ready expedition to explore the region. His company consisted of Fedot Alekseyev, traveling with the merchants Andreev and Afstaf'iev (representing the Guselnikov merchant house), who provided their own ship, and Gerasim Ankudinov, an experienced sea captain with his own ship and some 30 men. Dezhnev, along with Mikhail Stadukhin, recruited some 19 men of their own and procured a traditional kocha ship. Including escort vessels, a total seven ships sailed from the mouth the Kolyma River, along the Siberian Arctic, to the Anadyr River north of Kamchatka, and in doing so became the first Europeans to sail through the Bering Strait some 80 years before Vitus Bering. Dezhnyov described rounding a large mountainous promontory identified as Chukchi, Tschuktschi, or Chukotka Peninsula. Of the seven vessels the multiple leaders, only three ships, including Dezhnev’s, survived the passage. His expedition was mostly forgotten outside of limited cartographic circles until Gerhardt Friedrich Muller discovered Dezhnyov's reports and in 1758 published them. Dezhnyov ultimately proved that there was indeed a nautical route from Russia to East Asia, but at the same time confirmed that it was exceedingly impractical for trade. Nonetheless, his promontory was subsequently embraced by European cartographers who, lacking serious scientific data from the Dezhnyov expedition, surmised the form. The first of these was Dutchman Nicholaas Witsen, who prepared a map in 1687 based upon Dezhnyov's records that he discovered on a 1665 trip to Moscow – hence the term Witsen’s Peninsula. Many cartographers followed suit, and some, like Nolin here, even went so far as to suggest that this landmass may actually be connected to America. Curiously, in doing so, Nolin both embraces and dismisses Dezhnyov, whose journey provided the first definitive proof that Asia was not connected to America.

Nolin maps the apocryphal Lake of Chiamay roughly in what is today Assam, India. Early cartographers postulated that such a lake must exist to source the four important Southeast Asian river systems: the Irrawaddy, the Dharla, the Chao Phraya, and the Brahmaputra. This lake began to appear in maps of Asia as early as the 16th century and persisted well into the mid-18th century. Its origins are unknown but may originate in a lost 16th century geography prepared by the Portuguese scholar Jaõ de Barros. It was also heavily discussed in the journals of Sven Hedin, who believed it to be associated with Indian legend that a sacred lake linked several of the holy subcontinent river systems. There are even records that the King of Siam led an invasionary force to take control of the lake in the 16th century. Nonetheless, the theory of Lake Chiamay was ultimately disproved and it disappeared from maps entirely by the 1760s.

The Caspian Sea features two large whirlpools. These illustrations are possibly the earliest representation of factual cyclonic whirlpools that appears in Middle and South Caspian waters due to the massive inland sea’s unique current.

In the upper right corner of the map there is an inset mapping of the ‘Nouvelle Philippines’ based upon a Jesuit report of 1697. These are better known as the Mariana Islands, also called the Isles des Larrons, an archipelago to the southeast of the Philippines. Curiously, the Mariana Islands are also mapped on the main chart according to the more accurate reports of Jesuit explorer Paulus Klein, the provincial superior of the Jesuit order in the Philippines from 1708-1712. The curious double mapping may suggest either that Nolin was unsure of the true geography of these islands or that he thought they may in fact be separate archipelagos.

On the whole, this map offers much of interest and withstands extensive perusal with an almost endless array of cartographic delights. It was first issued in 1740 by the younger Jean-Baptiste Nolin based upon his father’s work. The present edition is dated 1749 and was issued by Nolin and Jean-Baptiste Crepy, a Paris publisher. Although we are aware of no extensive cartobibliographic study of this map, it is likely that there are later editions as late as the 1780s. Nonetheless, all examples area rare to the market, as few survived the ages.

Jean-Baptiste Nolin (1657 - 1725) was a French cartographer and publisher active in Paris during the late 17th and early 18th centuries. Nolin was a man of exceptional business acumen and while many cartographers struggled financially, he prospered. Many attribute this to the fact that Nolin produced very little original work, relying primarily on business relationships with the legendary Italian cartography Vincenzo Coronelli, Jean-Dominique Cassini, and the French geographer Jean Nicolas du Trallage, Sieur de Tillemont (1620–1698). His work is known for exceptional aesthetic élan, combining Italianesque baroque and rococo ethics with most current cartographic data. It might also be said that Nolin was a bit of a con-artist in his self-promotion, often inaccurately using such titles as 'Engraver to the King' and 'Geographer to the Duke of Orleans', neither of which appointments he actually held. In 1705, he was successfully sued by Guillaume De L’Isle for copyright infringement, a case which cost him significant scientific credibility. Nonetheless, Nolin remained commercially popular and prosperous. Nolin's son, also Jean Baptiste Nolin (1686 - 1762) inherited his father’s map plates and republished many of his maps, as well as issuing his own unique maps, well into the 18th century. Both Nolins maintained offices on Rue St. Jacques, Paris.


Jean-Baptiste Crépy (fl. c. 1730 - 1796), also spelled Creepy, was a French map and print publisher based in Paris during the middle of the 18th century. His father Etienne-Louis Crépy, son of Jean Crépy (1660-1739). Within the family dynasty Jean-Baptiste was known as Crépy le Jeune, or Crépy the Younger. His work ranged from maps, such as his reprint of the Le Rouge issue of the Popple Key Map, to general prints, and even geographically themed board games. He is known to have worked with other French mapmakers o the period including André Basset. maintained offices at Rue St. Jacques a St. Pierre near la Rue de la Parcheminerie. The Crépy firm went into bankruptcy and liquidated at auction on the 24th of April, 1790. Jean-Baptiste Crépy died in 1796.

Good. Map exhibits typical issued associated with wall maps of this age, including soiling, wear, abrasion and toning. Map has been professionally restored and backed on clean linen. Attached to rollers.