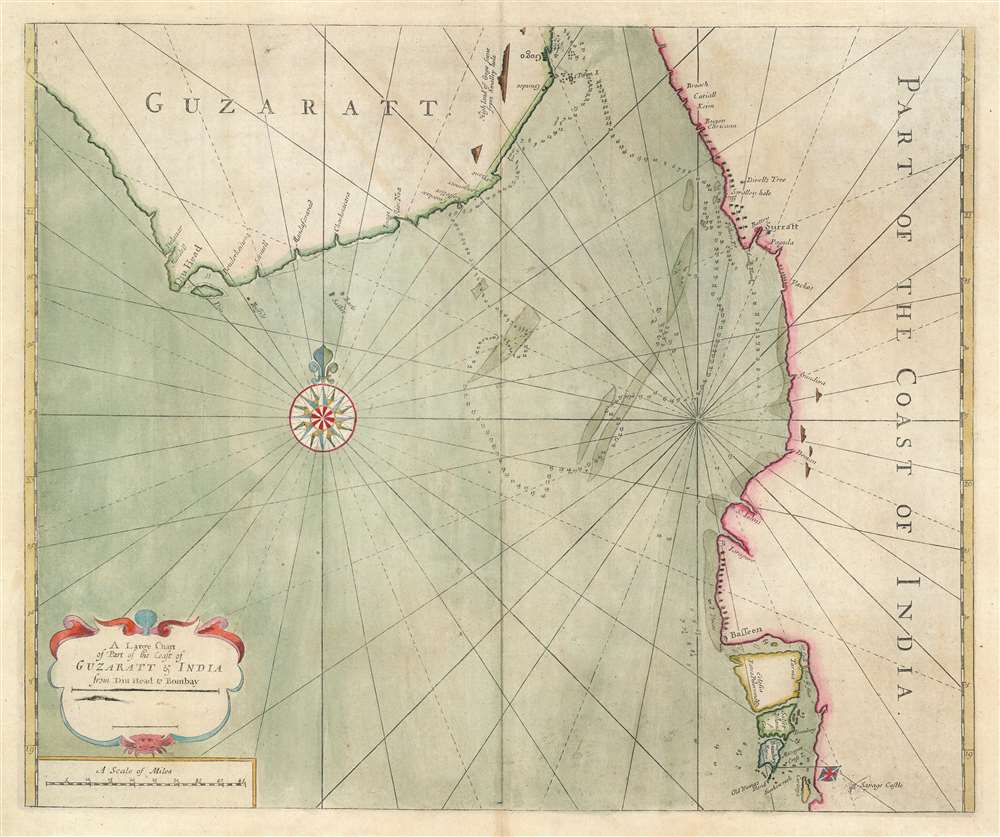 Very rare early map of the waters around Bombay (Mumbai).

An extremely rare c. 1716 nautical chart or maritime map illustrating the Gujarat coast of India and the Gulf of Khambhat in the vicinity of Bombay or Mumbai. The map covers the coastline from, roughly Somnath and Diu to Vadodara, and south to Mumbai. The area now occupied by the Mumbai Peninsula is here divided into three islands, Tarma, Salset, and Bombay. Only one of these islands, Tarma, is connected to the mainland via a narrow bridge. On the southernmost island, Bombay is identified with the British flag, making this one of the earliest maps to illustrate Bombay following the 1661 British takeover. At sea, there are tenuous soundings and shadings around the shoals in the Gulf of Khambhat, also known as the Gulf of Cambay, and around Bombay itself.

The first English settlement near Bombay, known as the Western Presidency, began in 1618 at Surat in present-day Gujarat. The East India Company established a factory there, protected by a charter from the Mughal Emperor Jahangir. Bombay itself, at the time, was a Portuguese possession, and despite several attempts to seize the island by the British and Dutch, remained so until 1661, when it was given to England in the dowery of Infanta Catherine of Braganza on her marriage to King Charles II. In 1668, in exchange for an annual payment to the crown of £10, Bombay was transferred to the British East Indian Company. The EIC established a factory and fort on the island by 1673. By 1687, Bombay had become the center of regional trade and the East India Company made it the administrative headquarters of its possessions in India.

Despite Bombay's growing regional importance, good maps were slow to emerge. Seller was the first British cartographer to publish a map of Bombay, which he issued in 1685 in his Atlas Maritimus. This became the default map of Bombay, appearing in subsequent editions of the English Pilot and copied by van Keulen and other cartographers until 1768, when William Nicholson was commissioned to make a new detailed survey of the harbor and adjacent coastline. Likewise, maps of the surrounding coastline were slow to emerge, with the first comprehensive map of the coast not appearing until the 1703 edition of the English Pilot, the Third Book.

The chart was probably initially drawn by Samuel Thornton, who inherited the English Pilot plates from his father, John Thornton. At least 2 known examples of this map have the Samuel Thornton imprint below the title. This suggests that it was first issued for John and Samuel Thornton's 1703 issue of the English Pilot, Third Book. The present example, corresponding with the Bibliothèque nationale de France example, has the cartographer's name removed, thus it likely postdates the 1715 Richard Mount and Thomas Page takeover of the work. The map is scarce, so it was likely only published in the first Mount and Page edition of the English Pilot before being replaced. Thus, two states are known, this being the second.

This map is extremely scarce. We have been able to identify examples in the British Library, the Bibliothèque nationale de France, the Library of Congress, and the New York Public Library, as well as at least two examples in private hands.