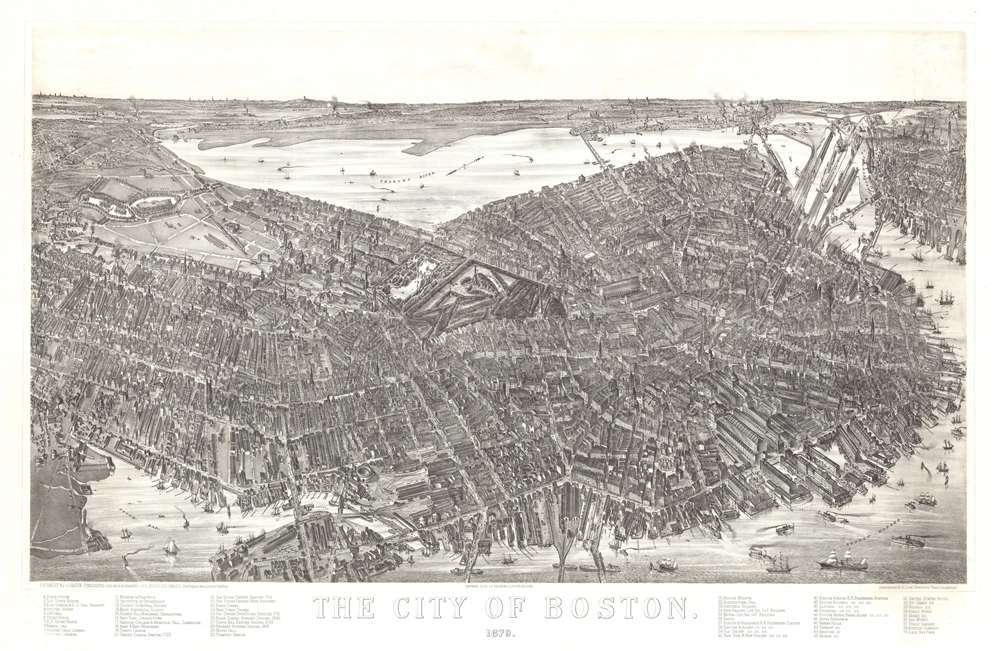 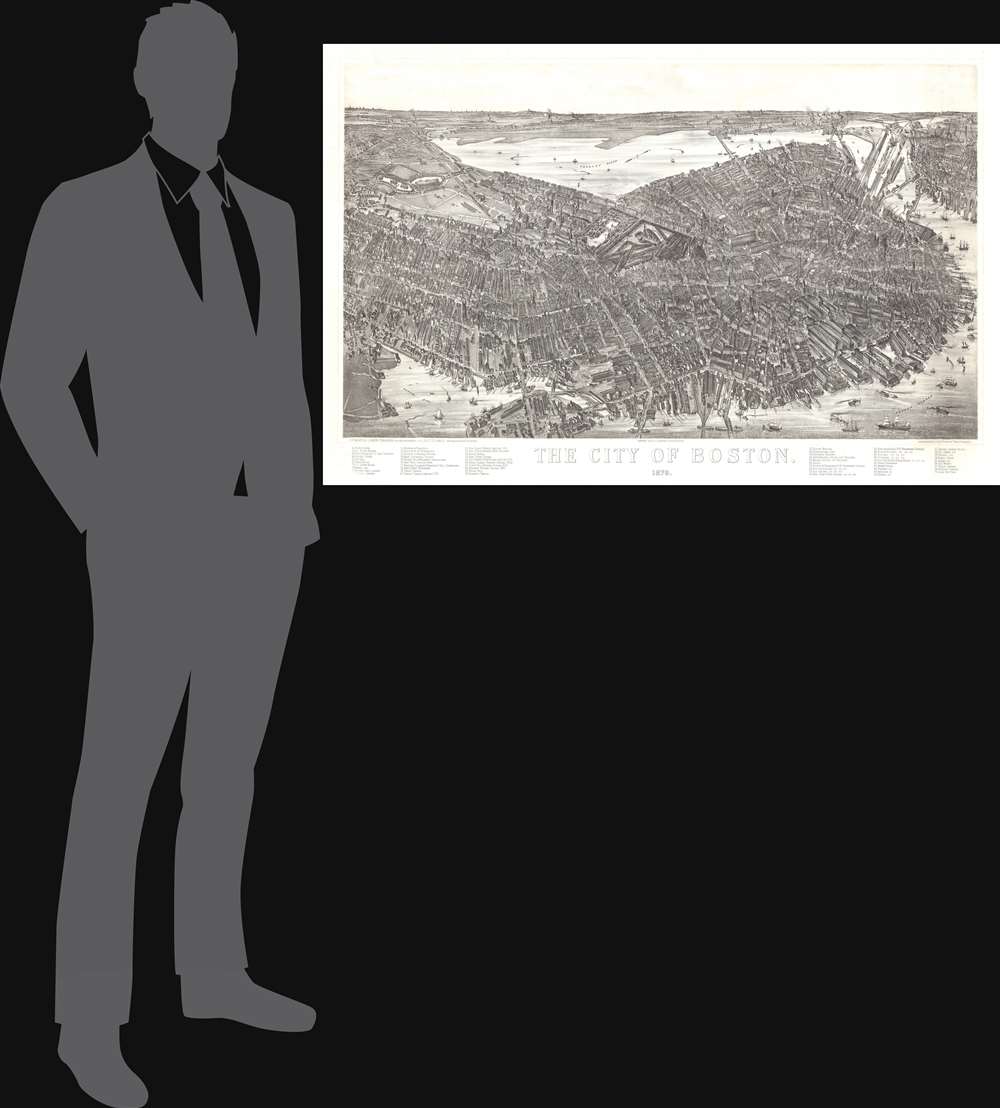 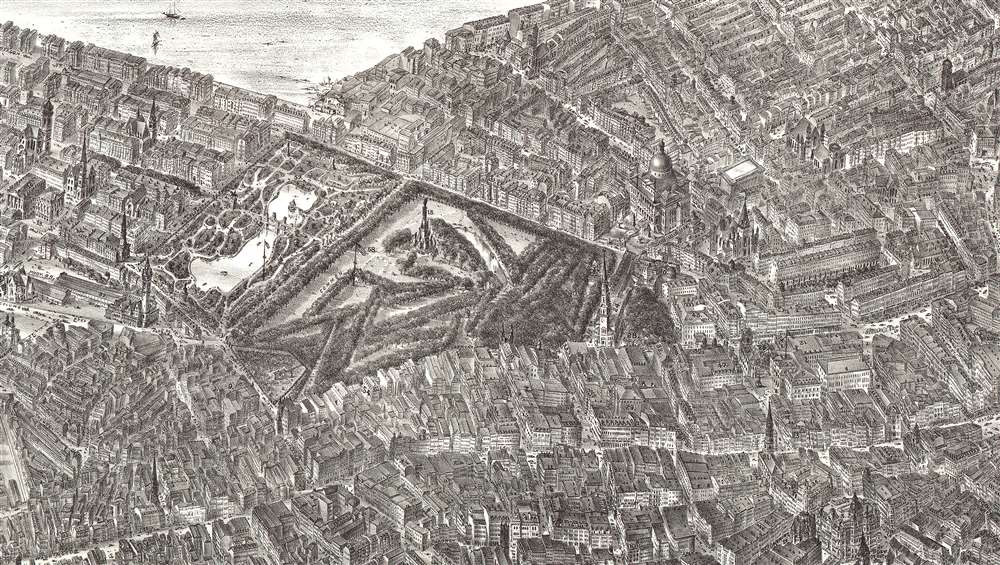 A magnificent 1879 bird's-eye view and map of Boston by James Compton Hazen and Oakley Hoopes Bailey, it is considered the largest and most detailed view of Boston Proper. The view presents Boston from an imaginary elevated position to the southeast of the city, looking northwest towards the Charles River with Cambridge appearing in the upper left and East Boston in the upper right. Hazen's slight and novel exaggeration of the vertical axis enhances the view with an intense three-dimensionality. This effect further highlighted by Hazen's use of a modified axonometric perspective - a technique that assumes a uniform fixed height and angle relative to all buildings, here modified only slightly to create a subtle perspective within the main Boston peninsula. The traditional view modality reasserts itself beyond the city proper where the background and outlying areas recede into the horizon.

The fine realistic detail is both striking and somewhat revolutionary, unlike any other American city view of which we are aware. The view centers on Boston Common and to the right of the Common, the old city center is entrancing with its irregular and confusing street layout. To the left, the more orderly grid of the Back Bay and Columbus is evident. At the western end of the map the Fenway is recognizable and development in the Back Bay is notably still underway. Several historic Boston landmarks are immediately recognizable, including the State House, Trinity Church, and Boston Common, while a key in the title margin identifies fifty-nine features of the city, among them, buildings, parks, cemeteries, and monuments. In the foreground a wide variety ships fill the harbor, presenting Boston as a bustling town rich in commerce and shipping. A message made only more poignant when considered in the context that at this time Boston was still actively rebuilding from the devastation of the Great Boston Fire of 1872.

This view was drawn by James Compton Hazen. The original drawing survives at the Leventhal Center of the Boston Public Library. It was published jointly by Hazen and the prolific American viewmaker Oakley Hoopes Bailey. The striking lithographic engraving is the work of Charles Armstrong. All examples are exceedingly rare. We are aware of two examples at the Boston Public Library, an example at the Library of Congress, and a fourth at Pennsylvania State University. This map is offered jointly with James E. Arsenault and Company.


James Compton Hazen (November 5, 1852 - January 14, 1908) was an American landscape artist and viewmaker active in the late 19th and early 20th centuries. Hazen was born in Hackettstown, New Jersey. Hazen began working with the viewmaker Howard Heston Bailey (1836 - 1878) as early as 1873. His work seems to have been broad ranging, including actually drafting the views, as well as door to door sales, and even delivery of the final product. From 1877 he worked with H. H. Bailey's younger borther, Oakley Hoopes Bailey (1843 - 1947), where he completed some of his most famous work, including important views of Boston and Hew Haven. Hazen's name is associated with some 55 views, the last of which, Lynn Woods, was completed in 1904. He died four years later in 1908 and is interred near his birthplace in Morristown, New Jersey. Learn More...


Charles Armstrong (November 23, 1836 - 1906) was a British-American artist, lithographer, chromolithographer, printer, and viewmaker active in the second half of the 19th and years of the 20th century. Armstrong was born in Bryanston Squre, London, England and mastered wood engraving under his father, Thomas Armstrong. He then studied at the Marlborough House School and completed a seven-year apprenticeship with Leighton Brothers, Printers, where he learnt lithography and copper engraving. In 1858, after completing his apprenticeship, Armstrong worked as a chromolithographic artist under Vincent Brooks. He also married and developed a passion for Yacht racing - suggesting considerable prosperity. Armstrong emigrated to New York in 1866, funding his own firm, in partnership with Herman Bencke. The partnership lasted until 1868, when Armstrong moved to New Jersey and signed a contract with the famous German-American lithographer Louis Prang (1824 - 1909). In 1871, he partnered with John E. Green and Daniel M. McLellan, establishing the firm of Armstrong, McLellan and Green. I the following year, Armstrong moved to Boston, to found Armstrong and Company, describing himself as an 'artistic lithographer.' This was an unfortunate choice, as Armstrong's first offices, on Boston's Milk Street, were almost immediately destroyed by the 1872 Great Fire of Boston. The firm reestablished itself on Congress Street in 1874, but were again ravaged by fire. Finally, he moved to Daye Court, in Cambridge, where the firm prospered until 1872, when it merged with H. O. Houghton and Company, later Houghton-Mifflin. Under H. O. Houghton, Armstrong operated a semi-independent publishing department, retaining his own imprint, and often working with partner firms working with a similar arrangement such as Riverside Press. Armstrong also worked extensively with the New York publisher Charles Scribner, printing color plates for more than thirty years, including such lavish chromolithographic productions as American Yachts (1884) and A. B. Frost’s Shooting Pictures (1896). Armstrong died in 1906 in New Hampshire. Learn More...