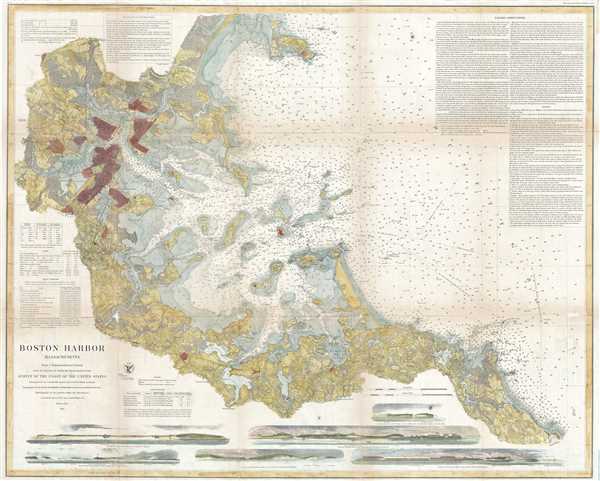 A stunning 1867 example of the U.S. Coast Survey’s nautical chart or maritime map of Boston Bay, Boston Harbor, and environs. The map covers the Massachusetts coastline from Cape Ann southward past Gloucester, Marblehead, Lynn, Boston and Cohasset to Green Harbor River. It offers astounding inland detail noting individual buildings, roads, communities, fields, and smaller waterways. In addition to inland details, this chart contains a wealth of practical information for the mariner including six land profile views, countless depth soundings, sailing instructions, tidal information, lighthouse locations, and notes on magnetic variance. This chart is noteworthy in that it is one of the few that A. D. Bache took a personal hand in surveying.

The triangulation for this chart was prepared by C. O. Boutelle and A. D. Bache. The topography was completed by H. L. Whiting, J. S. Williams, and S. A. Gilbert. The hydrography was accomplished by a team under the command of C. H. Davis A. Boschke. The entire production was supervised by A. D. Bache, Superintendent of the Survey of the Coast of the United States from 1843 to 1865 and one of the most influential American cartographers of the 19th century.

Bache, A. D., Report of the Superintendent of the United States Coast Survey, (Washington) 1867.

Very good. Some wear and toning along original fold lines. Minor loss at a couple of places along folds. Rip near top border, repaired. Minor foxing. Professionally flattened and backed with archival tissue.