1875 Roe and Colby Map of Camden and Rockport, Maine 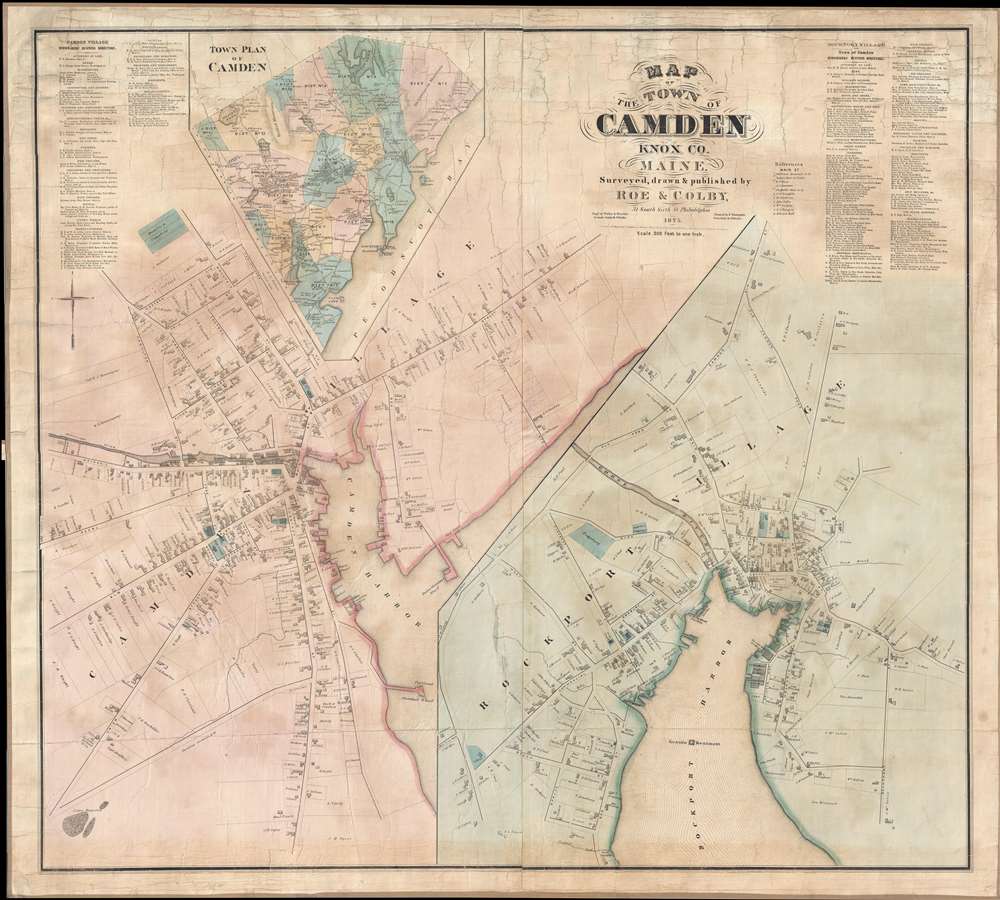 1875 Roe and Colby Map of Camden and Rockport, Maine

One of only two known examples of Colby and Roe's map of the arts and yachting community of Camden Maine.
$4,500.00

A discovery of exceptional rarity, this is Frederick B. Roe and George Nehemiah Colby's 1875 map of Camden, Maine. This is the best and finest map of Camden to appear in the 19th century. It superseded 1856 E. M. Woodford map of the same region both in terms of size and level of detail. The map is divided into three sections. The first is a large-scale street map of Camden centered on Camden Harbor. The second, situated in the lower right, details nearby Rockport, and is centered on Rockport Harbor. A third smaller general map of the Camden region appears in the upper left corner.

Both large maps detail individual property owners, business, and ships, with the outlines of most buildings noted. The map reveals much of Camden's maritime heritage, with the homes of sea captains occupying some of the most prestigious properties. Maritime related business are also evident throughout, including a large anchor factory, coal shed, and fish market near the harbor. In an inlet on the opposite side of the harbor there is a large ship yard.

Similarly, in the Rockport map, there are also shipyards, ice houses, and other nautical business. There is however no mistaking Rockport's main business, lime production. Lime kilns occupy much of the property along the harbor and the town's most prominent residents are lime magnates.

Today Camden is known as one of the most beautiful coastal towns in Maine. It is best known for its thriving arts community and population that swells in the summer months with yachtsmen and temporary transplants from Boston, New York, and Washington DC.

The map, like most of Roe and Colby maps, would have been sold only by subscription. Accordingly, the names of Camden and Rockport individuals and business who purchased this map appear in the upper left and right corners, respectively. The long list of subscribers including hair dressers, carpenters, blacksmiths, lime manufacturers, hotels, ship builders, private individuals, and more. The list also indicates how many examples of this map must have been issued, about 200, but today it has been exceedingly rare. We have been able to isolate only one other example located at the Camden Public Library.

George Nehemiah Colby (January 13, 1846 - 1890) was an American civil engineer and map publisher active in Houlton, Maine in the late 19th century. Colby was born in South Berwick Maine and was married to Julie Gertrude Ganong (1853 – 1889). Colby's corpus of work consists primarily of Maine focused wall maps, county and state atlases, and more specific regional maps, for which he personally compiled surveys and sold by subscription. Colby initially worked with the U.S. Coast Survey, where his work contributed to the survey's important 1881 map of Mount Desert Island, Maine. In the private market Colby published Maine centered material in the style of Massachusetts cartographer Henry Walling. That is to say, he issued highly detailed maps on a large scale that he sold by subscription to local institutions and land owners. Colby's maps, like Walling's, are exceptionally desirable for anyone interested in family history, as they often list individual family names and land holdings. Colby partnered Frederick B. Roe in 1873 to issue wall maps of several Maine towns including New Brunswick, Thomaston, Bath, and Camden. This partnership lasted until about 1878 and maintained offices in Philadelphia at 31 South 6th Street. Colby later partnered with J. N. Stuart to similarly publish subscription-based maps and atlases of Maine, Communities. When Colby retired in the 1890s, Stuart fully took over his business. Colby and his wife had three children, George Nehemiah, Frederik Franklin, and Mary Gertrude.


Frederick B. Roe (1845 – April, 1905) was an American civil engineer and map publisher. Roe was born in Brookfield, Connecticut. Roe was of a generation of cartographers, along with Henry Walling, Frederick Beers, George Colby, J. N Stuart, and others who, taking advantage of the lithography printing revolution, traveled throughout the United States mapping and publishing large scale town and county maps. These were generally sold by subscription and were often printed only in very small runs. Roe seems to have been primarily based in Philadelphia, which was then an important map printing center, but he traveled extensively. He also lived for a time in Reading Pennsylvania, where he served a term on the Common Council. He also lived for a time in Wilmington, Delaware, where he lived while working on a detailed wall map of that region. Roe partnered with George N. Colby in 1873 to issue wall maps of several towns in Maine including New Brunswick, Thomaston, Bath, and Camden. This partnership lasted until about 1878 and maintained offices in Philadelphia at 31 South 6th Street. Later he moved his offices to 17 North 6th Street, Philadelphia. Among his more important works is a detail city plan of Duluth, Minnesota, published with Albertson and Chamberlain. He died in Cincinnati in the last week of April, 1905.