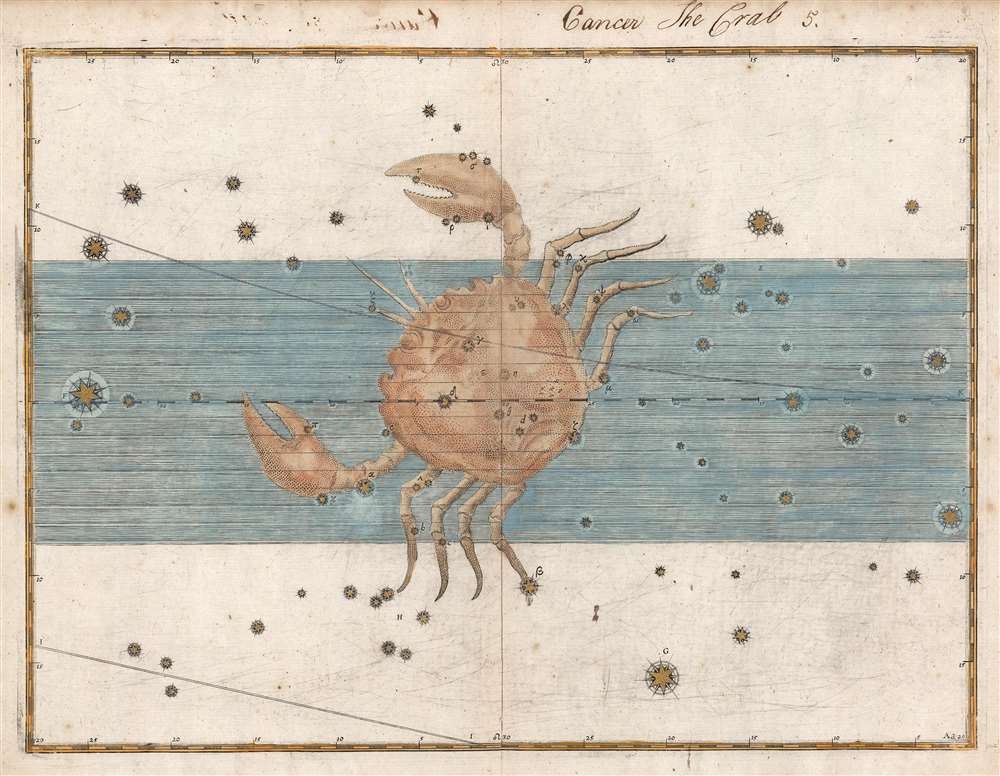 Cancer from the most important 17th Century celestial atlas.
$2,000.00

This is a beautiful example of Johann Bayer's celestial chart of the zodiacal constellation Cancer, in a finely colored example with gilt highlighting. It was engraved for Bayer's seminal 1603 celestial atlas, Uranometria: omnium asterismorum continens schemata, nova methodo delineata, aereis laminis expressa. As the forerunner of all later celestial atlases, the importance and relevance of this work is emphasized by its continued publication throughout the mid-seventeenth-century.

Bayer's Uranometria was built on the work of Tycho Brahe and Alessandro Piccolomini, but he added roughly a thousand additional stars. Bayer's breakthrough was, first, to fix all of these discovered stars to a reference grid, and second, to provide a systematic format for their classification. Bayer's system - still in use - is known as the Bayer Designation. Bayer assigned Greek letters to each star of a given constellation, in order of apparent size: thus the brightest star of the Cancer constellation was classified Alpha Cancri. (The traditional name of this star, Acubens, is derived from the Arabic الزبانى‎ [al zubanāh], 'the claws.' The stars on Bayer's charts accompany each of the major stars with their Greek letters, making them easily identifiable. Beta Cancri, for example, appears as the bottom left of the crab's eight legs. (its Arabic name, Al Tarf, can be translated from the Arabic as 'end' or 'edge'. An exoplanet, designated Beta Cancri b, is believed to be orbiting the star.

This plate was engraved by Alexander Mair for inclusion in the 1603, Augsburg edition of Johann Bayer's Uranometria. The plates were acquired in the late 1630s by Johann Görlin the Elder, an Ulm bookseller who would republish Bayer's work in two separate volumes - first in 1639, and thereafter in apparently identical editions in 1648, 1655, and 1661 - the present map is from one of the Ulm editions. The Ulm editions are distinguishable from the Augsburg by the absence of verso text on the plates, otherwise not changed. The various editions of Uranometria are well represented in institutional collections. The separate plates are ill-cataloged, with only one 1603 example of this plate listed at the National Library of Australia.