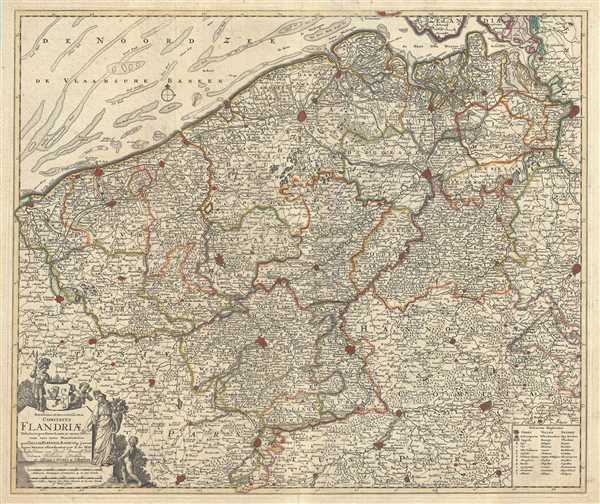 Attractive map of the Flemish regions of Belgium.
$900.00

This is an attractive c.1721 map of Flanders by Frederik De Wit. The map depicts western portions of modern day Belgium and northern France along with parts of Holland, a region commonly known as Flanders at the time. Extends from Zeeland south to Arras in France and from Gravelines on the French coast east as far as Brussels. The map renders the entire region in extraordinary detail offering both topographical and political information noting French, Spanish and Dutch dominions. Coastal features are also beautifully noted.

A beautifully engraved title cartouche adorns the lower left quadrant of the map. The map was issued by Covens and Mortier and printed shortly following their 1721 acquisition of De Wit's plates from Maria De Wit.

Very good. Overall age toning. Some wear and fading along original centerfold. Verso repair over split along centerfold. Some spotting.