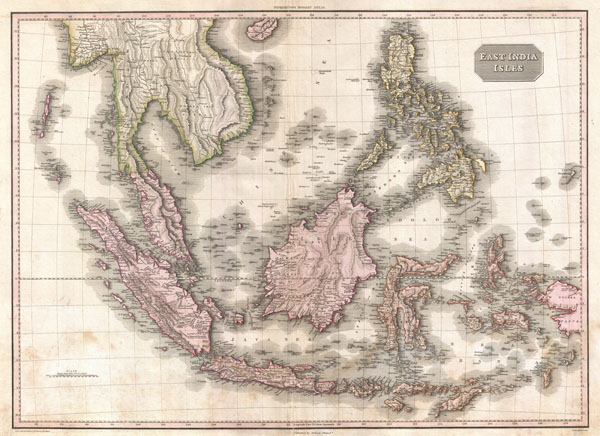 One of the most beautiful maps of the East Indies to appear in the 19th century.

Truly a masterwork of copperplate engraving, this is Pinkerton's extraordinary 1818 map of the East Indies. Covers from Burma south to Java and from the Andaman Islands eastward as far as the Philippines and New Guinea. Includes the entire Malay Peninsula, much of Southeast Asia (Thailand, Cambodia, Vietnam), Sumatra, Java, Borneo and the Philippines. Pinkerton offers impressive detail throughout noting indigenous groups, forts, towns and cities, swamps, mountains, and river systems. Known regions such as Java and Sumatra are full of interesting notes and commentary, such as the sites of various gold mines, plantations, notes on river navigation, and comments on the terrain. Lesser known areas, such as New Guinea and the interior of Borneo, often feature simpler comments suchas 'Fresh Water' or 'Lava.' The island of Singapore, spelled 'Sincapoor' is identified. The island of Rakata, spelled 'Rakama,' where Krakatoa famously erupted in 1883, destroying the island in its entirety, is also identified. Further identifies the important centers of Siam, Bangkok, Malacca, Pegu, Rangoon, Manila, etc. Possibly the finest mapping of the region to appear in the 19th century.