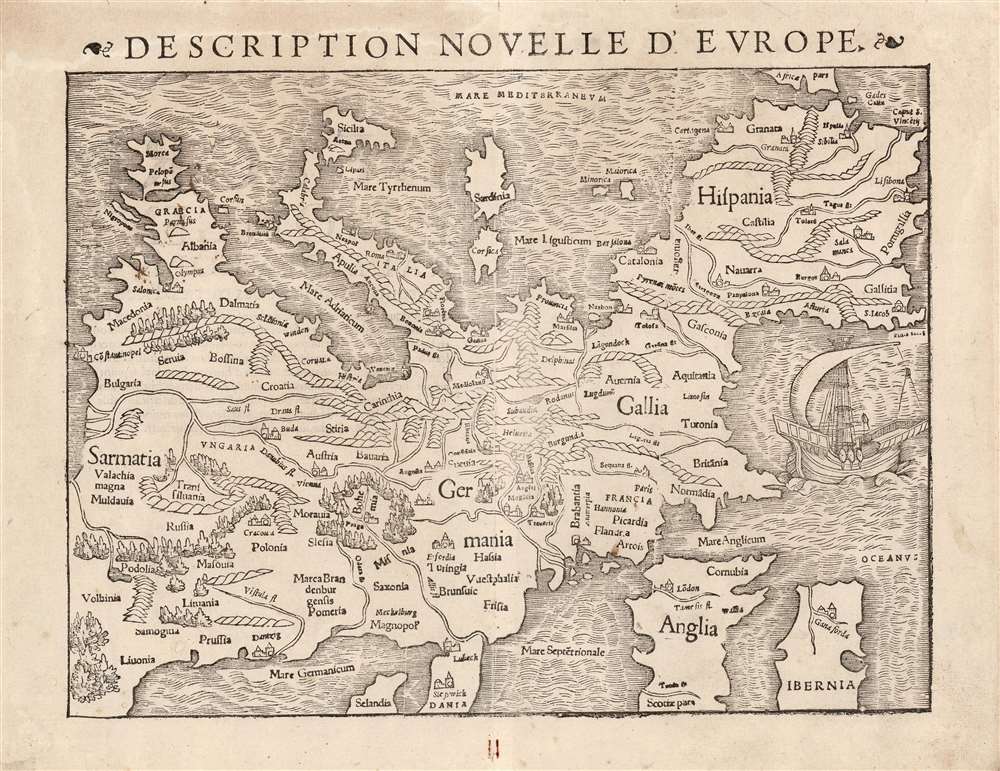 Earliest map of Europe based on contemporaneous knowledge.

This is a handsome example of Sebastian Münster's southern-oriented map of Europe: an early French edition of the first acquirable map of Europe based on contemporary geographical information, and the only acquirable derivative of Martin Waldseemüller's unobtainable 1511 map of Europe. Münster's Geographia and Cosmographia provided for many years the literate European's only glimpses of the world, and these two works contained a number of maps with previously unseen contemporaneous knowledge of the areas they depicted. For Münster's readership, this map was almost certainly the first depiction of their home continent not based upon the 2nd century work of Claudius Ptolemy.

The southern orientation of the map, which sets it apart from all other well-known 16th century maps of Europe, has caused it to languish somewhat as an ill-understood curiosity. As such, it has shared the fate of Münster's Asia, as observed by Suarez:

Munster’s important map of Asia… has in our day too often been glossed over as the quaint relic of a naïve mapmaker.

The 'upside-down-ness' of the map is, after all, unusual among most published maps even of the sixteenth century. But this orientation is neither an error, nor a regression, nor a touch of whimsy. It is an indication of the map’s modernity. The convention of keeping north at the 'top' of a map was inherited from Ptolemy's maps, and those which Münster produced based on Ptolemaic sources retained that second-century geographer’s northern orientation. However, regional maps printed in Germany in the first part of the 16th century for the use of travelers were oriented to the south in order to be used in conjunction with a solar compass. Since these represented Munster’s most accurate and detailed modern sources, his maps derived from them virtually all shared the same, southern, orientation. Münster's intent to produce a modern map was made explicit in the map's title in its German editions, which translated to 'Europe, a Third Part of the World: Useful to Our Era.' Although a map such as this would be of little usefulness to a traveler, it would have been extremely useful in understanding one's place in Europe, and Europe's place in the world.

Like all geographers of the 16th century, Münster relied heavily on the framework laid down in the 2nd century by Claudius Ptolemy (83 - 161 AD). His studies were reinforced by much more state-of-the-art scholarship, however, including that of the great cosmographer Martin Waldseemüller (1470 - 1520), whose 1511 Carta Itineraria Europae, provided the basis for the production of this map. The Carta Itineraria, a four-sheet wall map of Europe (which exists in a single copy of its 1520 edition) was in turn heavily influenced by the 1500 and 1501 traveler’s maps of Erhard Etzlaub (1455 - 1532). While Waldseemuller’s grand work includes considerably more detail than Münster’s much smaller map, its influence both in terms of scope and orientation is unmistakable. The only other derivative is Münster’s own extremely rare 1536 Tabula Europa, the precursor to the map of Europe that he included in Geographia and Cosmographia.

The Only Show In Town

Between the 1511 Waldseemuller and the 1536 Münster, there appear to have been no comparable modern representations of Europe produced. A very schematic chart of Europe appears in Bordone’s 1528 Isolario, but the coastal outlines betray a heavy debt to Ptolemy, and the interiors include almost no information, in contrast to the relative wealth of modern place names in Münster.

Münster, like the modern geographers he most emulated, was German and the heart of his map is consequently German as well: in sharing the southern orientation of the Waldseemüller and Etzlaub maps, he is emphasizing the map's German-ness as well as its modernity. The map's reach embraces Spain and part of Ireland to the west, and extends eastwards to include the Black Sea coast and the mouth of the Danube, Bulgaria, Moldavia, and Livonia. The African shores of Gibraltar appear to the south, as does Sicily. The northern reaches fall beyond the scope of this map, which truncates Ireland and Scotland, shows only the southern portion of Denmark, and only the southernmost extent of Sweden. The body of the map is rich with the place names of the greatest cities of Münster's era: nations are named as well. Mountain ranges are shown pictorially and are reasonably accurately placed, as are Europe's major rivers. Forest regions are also indicated pictorially. The map is not without decoration - the attractively-executed woodcut includes a fine ship, sailing off the coast of France.

The printing history of this map is long and convoluted. It first appears in Münster's 1540 edition of Ptolemy's Geographia, and appeared in all editions of that work with only slight variations until the final 1552 edition. Beginning in 1544, the map was among the 24 foretext maps featured in Münster's Cosmographia, in which this map appeared until about 1569. Whereas Geographia only appeared in Latin, Münster's new work was published in German, Latin, French, and Italian (the sole Czech edition of 1554 had only one map of Bohemia). The movable stereotype text with which the map was lettered exhibits slight variations from edition to edition, as does the verso text. The map's title was added in letterpress to every edition, and also exhibited many variations over the course of its print history. The title of the present example, DESCRIPTION NOVELLE D' EUROPE, is unique to the French Cosmographia editions. Although a full census of the states of this map has not been compiled, the typographic changes occurring on the map most closely corresponds to examples we have examined dating to the early and mid 1550s. The unique 'Novelle' spelling in the title, among other typographic changes, lead us to classifying this example as belonging to the 1556 French language La Cosmographie Universel.

Cracks in the block would increase in severity until 1571 or 1572, when the badly worn woodblock was replaced with a similar (but easily distinguishable) woodcut which remained in Münster's opus until 1578, with the exception of the Italian editions of 1571 and 1575, which appear to have been produced using maps printed for the Italian 1558 edition. All editions of 1588 and later contained new maps derived from Ortelius.

The French editions of La Cosmographie Universelle are scarce, appearing in only two examples in the Bibliotheque National de France. In its various editions, we see perhaps a dozen separate examples of the map in OCLC.


Martin Waldseemüller (September 11, 1470 - March 16, 1520) was a German cartographer, astronomer, and mathematician credited with creating, along with Matthias Ringmann, the first map to use the name America. He was born in Wolfenweiler, near Freiburg im Breisgau. Waldseemüller studied at the University of Freiburg and, on April 25, 1507, became a member of the Gymnasium Vosagese at Saint-Dié. Martin Waldseemüller was a major exponent of theoretical or additive cartography. Unlike contemporary Portuguese and Spanish cartographers, who left maps blank where knowledge was lacking, Waldseemüller and his peers speculated based upon geographical theories to fill unknown parts of the map. His is best known for his Universalis Cosmographia a massive 12-part wall map of the world considered the first map to use the name America, today dubbed as 'America's Birth Certificate.' This map also had significance on other levels, as it combined two previously unassociated geographical styles: Ptolemaic Cartography, based on an ancient Greek model, and the emergent 'carta marina,' a type of map commonly used by European mariners in the late 15th and 16th centuries. It also extended the traditional Ptolemaic model westward to include the newly discovered continent of America, which Waldseemüller erroneously named after the person he considered most influential in its discovery, Amerigo Vespucci. When Waldseemüller died in 1520, he was a canon of the collegiate Church of Saint-Dié. In contemporary references his name is often Latinized as Martinus Ilacomylus, Ilacomilus, or Hylacomylus. Learn More...