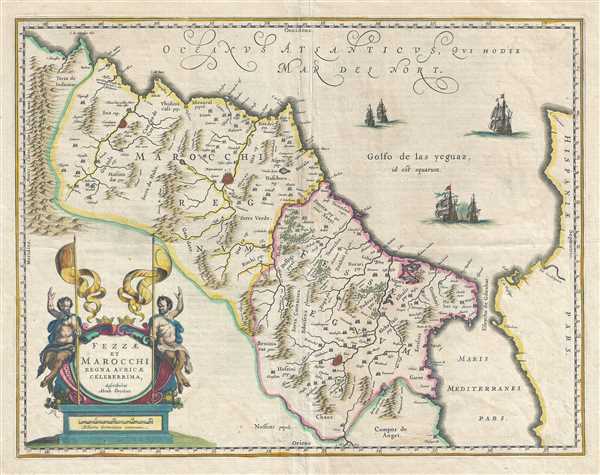 17th century map of Morocco on the Barbary Coast of Africa.

This is a beautiful 1675 map of Morocco on the Barbary Coast of northern Africa by Johannes Blaeu. Oriented with north on the right, the map covers Morocco and the Kingdom of Fez from the Atlas Mountains north to the coast of Spain. The Strait of Gibraltar is also included. The map renders the entire region in extraordinary detail offering both topographical and political information with mountains and forests beautifully rendered in profile. The fortified towns of Marrakesh (Marruecos), Fez and Taradande are also identified. The map is based on the 1570 map by Abraham Ortelius, who is credited here in the title.

A highly elaborate title cartouche adorns the lower left quadrant of the map. Beautifully illustrated ships are seen sailing in the North Atlantic Ocean. This map is based on the 1570 map by Ortelius and issued by Blaeu in 1675.

Blaeu, G., Atlas Major, 1675.     In 1662 Joan Blaeu published his masterwork, which has been described as 'the greatest and finest atlas ever published' (Verwey, 1952): his monumental, eleven-volume Atlas Maior. This contained nearly six hundred maps, more than two hundred in excess of the Blaeus' mainstay the Atlas Novus. The former work already being renowned for the quality and beauty of its maps, Blaeu not only would add copious material but would improve the sophistication of his work: many of the newly-added maps utilized larger-sized presses and sheets, and the artistry applied to the engravings was often far superior to that of the earlier maps in the atlas - many of which by now were thirty, and some more than fifty years old. Blaeu's Atlas Maior was published from 1662 to 1672, consisting of some 594 maps compiled into upwards of 9 volumes with some editions containing as many as 12 volumes. This triumphant work's publishing life was cut violently short when, in 1672, the Blaeu's mammoth workshop was destroyed by fire; surviving stock would be sold at auction between 1674 and 1677, occasionally appearing under the imprint of later Dutch printers such as Pieter Schenk and Pieter Mortier. The maps added to the Atlas Maior, owing to their tragically short publishing life, are among the hardest-to-find of the Blaeu maps.

Very good. Minor wear and verso reinforcement along original centerfold and edges. Some foxing and creasing at places.