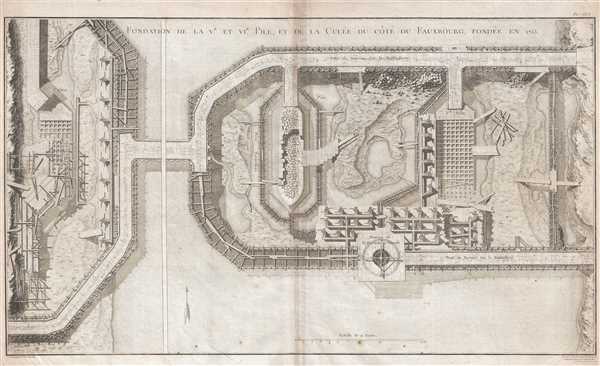 An architectural engraving of part of the construction of a bridge in Orléans, France.
$325.00

This is a 1788 Jean-Rodolphe Perronet architectural plan illustrating part of the construction of the Pont d'Orléans in Orléans, France. The plan depicts the fifth and sixth columns and the abutment constructed on the opposite bank of the Loire River from the city center. An intriguing piece, it provides visual insight into the process of building a bridge in the late 18th century. The walkways and other access points used by the construction workers are illustrated, along with the construction of the two columns, which are at different phases in their construction. The sixth column is already being 'filled in' with stone, whereas the foundation of the fifth column is only just starting to be laid.

This plan was created by Jean Far Eustache de Saint-Far and engraved by Pierre Gabriel Berthault, François Dequevauviller, and F. Desbrulins in 1788 as Part of a treatise composed by Perronet entitled Description des Projets et de la Construction des Ponts de Neuilly, de Mantes, d'Orléans et autres; du Canal de Bourgogne, Pour la communication des deux Mers par Dijon; et de celui de la Conduite des Eaux de l'Yvette et de Bièvre à Paris. This engraving was accompanied by a detailed account of the construction of the Pont d'Orléans and several other bridges in France. The book was originally published in 1782 and most likely would have been used by Perronet at the school where he taught bridge and road construction for the French crown.

Jean-Rodolphe Perronet (October 25, 1708 - February 27, 1794) was a French architect and structural engineer, known for his many stone arch bridges. His most well known work is the Pont de la Concorde, built in 1787. Born in Suresnes, Perronet was the sone of a Swiss Guardsman. He entered the architectural practice of Jean Beausire, the 'first architect of the City of Paris' at the age of 17 as an apprentice. At Beausire’s practice, Perronet was put in charge of the design and construction of Paris’s grand sewer, embankment works, and the maintenance of the banlieue’s roads. In 1735, Perronet was named sous-ingénieur to the city of Alençon, in Normandy and he entered the Corps des points et chaussées (corps of bridges and roads) the following year. In 1737 he became the sous-ingénieur and then the engineer in charge of the Alençon region. On February 14, 1747 Perronet was named director of the Bureau des dessinateurs du Roi (Royal Bureau of Designers), and he and Daniel-Charles Trudaine began mapping all of the roads within the kingdom, along with constructing new ones. In 1750, Perronet was made and inspector general, and in 1764 he was named First Engineer, a title which he held for thirty years. From 1747 until 1791, 2,500 kilometers of roads were opened under his direction. During this time, from 1750 until 1791, Perronet was also involved in the construction of at least thirteen bridges. He became a member of the Royal Academy of Architecture (Académie royale d'architecture) in 1756 and was became an associate member of the Royal Academy of Science (Académie royale des sciences) in 1763. Perronet contributed to the Encylopédie ou Dictionnaire raisonné des sciences, des arts et des métiers, compiled under the direction of Diderot and d'Alembert. In 1775, the Bureau des dessinateurs du Roi became the Bureau des élèves des ponts et chaussées (Bureau of Students of Bridges and Roads), and then, in 1775 it became the École des ponts et chaussées (School of bridges and roads). He organized and taught at the school and instituted a form of teaching that, even today, seems fresh.


Jean Far Eustache de Saint-Far (1746 - 1822) was a French urbanist and architect. He attended the École royale des Ponts et chaussées, of which Jean-Rodolphe Perronet was the director. He spent a few years in the Royal Corps of Engineers before becoming the architect of the hôpitaux civils. He was in charge of rebuilding Mayence following the siege of Mayence in 1793. Of all of the buildings he envisioned, only one was built, on the northwest side of the Place Gutenberg. This building, built in 1810, is very much in the style of the buildings along the Rue de Rivoli in Paris.


Pierre-Gabriel Berthault (December 16, 1737 - March 3 1831) was a French engraver. He was the son of François Berthault, a mason, and Elisabeth Simon. He married twice, once in 1758 to Marie-Julie Lesquoy, whom he divorced in April 1793 to marry Marie-Madeleine Gérard later that same month. His best known work was his involvement with the Tableaux historiques de la Révolution française, to which he contributed over 100 plates. He only stopped working on that project because he was named the director of engravings at the Commission de publication de l’ouvrage sur l’Égypte (Commission for the publication of items about Egypt), which was published as Description de l’Égypte (Description of Egypt).