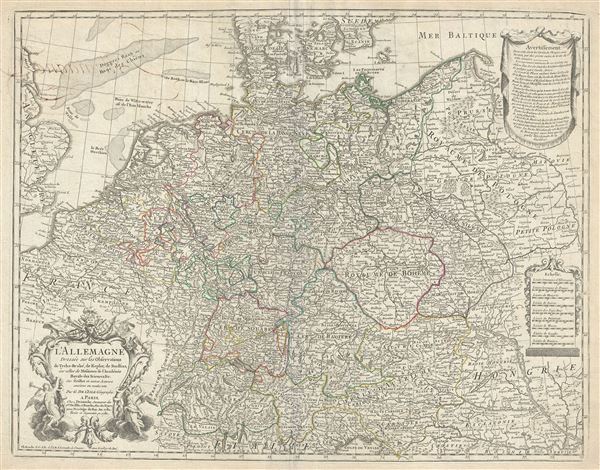 An appealing 1780 map of Germany by Delisle. This is a later revision, by Jean-Claude Dezauche, of Guillaume De L'isle's map of 1701. This map, which underwent numerous republications, covers the Germanic territories from the Baltic Sea to the Gulf of Venice and from Rouen in France to Warsaw in Poland and Belgrade in Serbia. It includes the modern day countries of Germany, Belgium, the Netherlands, Luxembourg, Switzerland, Austria and the Czech Republic, along with parts of Poland, Slovakia, Hungary, Serbia, Croatia, Italy and France. Offers an extraordinary level of detail throughout, noting numerous towns, cities, rivers, roads and other topography, with mountains beautifully rendered in profile.

Very good. Original platemark visible. Minor wear and creasing with verso reinforcement along original centerfold. Some ink transference in upper left quadrant.
Looking for a high-resolution scan of this?