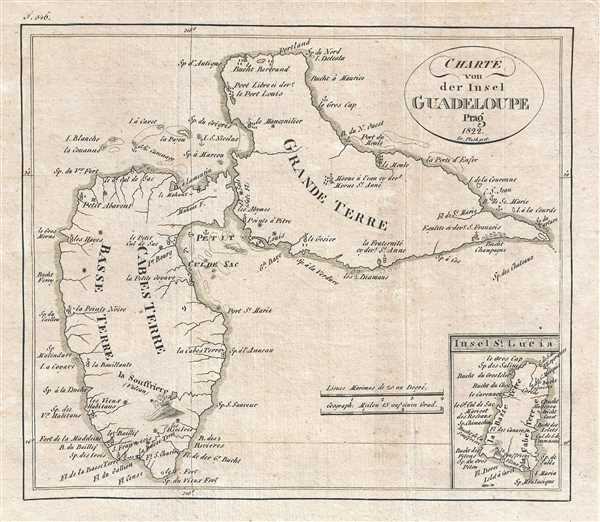 This is an 1822 Franz Pluth map of Guadeloupe. An island in the Caribbean, Guadeloupe is actually an overseas region and department of France. The map depicts both of Guadeloupe's two main islands: Basse-Terre and Grande-Terre. Numerous locations throughout the two islands are labeled, including Pointe-a-Pitre and the capital, Basse Terre, as well as locations along the islands' coasts. The island's active volcano, called La Souffrière, located on Basse-Terre, is illustrated in profile. An inset map of St. Lucia is situated in the lower right corner, with numerous coastal locations labeled.

Franz Pluth (1800 - 1871) was an engraver based in Prague, the capital of the Kingdom of Bohemia, then part of the Habsburg Austrian Empire. Pluth was born in Prague and most likely died in Zbraslav. He was active as a map engraver until at least 1848. His work is similar in style to that of Karl Ferdinand Weiland, a prolific German engraver, with whom he may have worked.