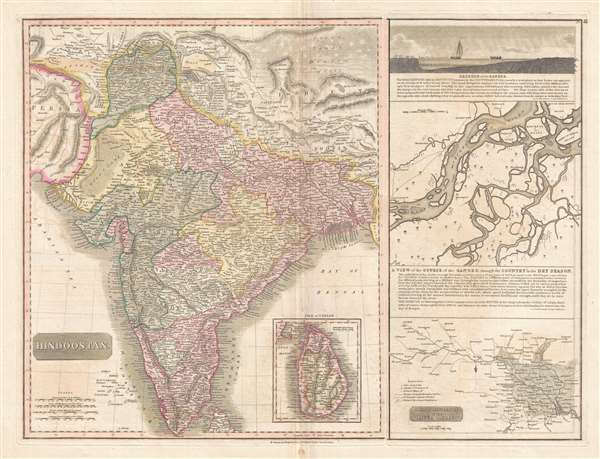 Issued at the outset of the Third Anglo-Maratha War, which consolited British colonial power in India.

This is the 1817 map of India with inset maps of the Ganges River by Edinburgh cartographer John Thomson. This magnificent map is the rarest of the Thomson India series. It depicts the whole of India from Lahore to the island of Ceylon (Shi Lanka). Numerous cities, towns, rivers, mountains and beautifully depicted deserts are noted throughout. The right-hand side of the map is dedicated to a careful mapping of the Ganges River and includes a cross-section of the Ganges, a map of the course of the Ganges in the dry season, and a map of the inland navigation routes along the river from the Bay of Bengal to Allahabad. This map's magnificent size, beautiful color, and high detail make this one of the finest atlas maps of this region to appear in the early 19th century.

As this map was being engraved and printed, India was in the midst of the Third Anglo-Maratha War (1817 – 1818) between the British East Indian Company (EIC) and the Maratha Empire. The war proved decisive with the EIC soundly defeating Maratha forces. The treaties ending the war consolidated British East Indian Company control over most of India south of the Sutlej River.

This map engraved by J. and G. Menzies and prepared by John Thomson for inclusion in the 1817 edition of Thomson's New General Atlas.