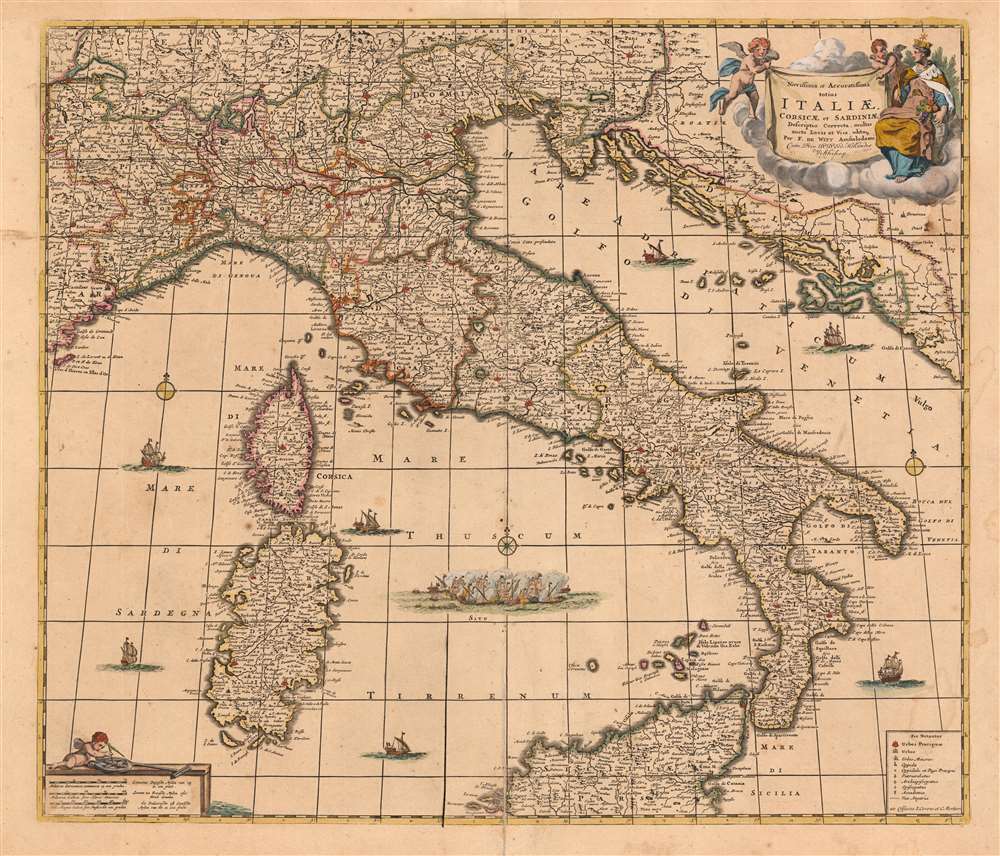 This is an attractive and scarce map of Italy, engraved c. 1680 by Frederik De Wit, but updated in 1721 by the Amsterdam publishers Covens and Mortier. Covens and Mortier added many place names and included the post road system first introduced on a 1695 map of Italy by Giacomo Cantelli da Vignola. The map covers the Italian Peninsula in its entirety including the Dalmatian coast, at the time controlled by the Republic of Venice, as well as the islands of Corsica, Sardinia, and part of Sicily. As with virtually every map of Italy produced in the seventeenth century, De Wit follows the model established by Magini's monumental 1608 Italia Nuova. Magini's map was justifiably influential, rendering the whole of Italy and its islands in magnificent detail with their river systems clearly presented and mountains shown pictorially.

As authoritative as Magini's 1608 wall map Italia Nuova was, one of its hallmarks was the placement of a mysterious mountainous island, 'M. Sardo', in the Gulf of Taranto. Despite being reproduced faithfully on near every 17th century map of the peninsula, the origins of this imaginary island have long been obscure. More recently, the scholar/collector Vladimirio Valerio discovered a notation on the Otranto map in the 1595 Stigliola manuscript Atlas of the Kingdom of Naples (added to his collection in 1975). On that manuscript, a crude mountain-hump is mapped in the Gulf of Taranto - the first known instance in print or otherwise of any such 'M. Sardo' in those waters. While no such island or mountain actually exists, there is, near the tip of Otranto, a mountaintop village - Monte Sardo - notable for its visibility both from the Gulf of Otranto and the Gulf of Venice. Thus the manuscript 'M. Sardo' is a crude coastal profile highlighting an observable coastal navigational feature. Valerio theorizes that, in compiling his masterpiece map of Italy, Magini consulted the Stigliola as the best and most detailed map of southern Italy. In doing so, he misinterpreted the navigational notation, preserving it as a literal mountain in the middle of the Gulf, and retaining the name M. Sardo. Magini's work was so authoritative that Blaeu copied the map, errors and all; and in turn, with few exceptions, the rest of the European mapmaking community followed.

In 1695, the Italian mapmaker Cantelli da Vignola produced a new map of Italy. While its outline largely retained Magini's cartography, it focused specifically on the system of Post Roads linking Italy's kingdoms with the Holy Roman Empire. Consequently, Cantelli rendered Italy's cities and mountains very differently from maps based more entirely on Magini. Either Peter Mortier, having acquired De Wit's copperplates from his widow Maria, or his heir Cornelis Mortier would extensively amend De Wit's map to include Cantelli's Post Roads as well as a multitude of additional place names, particularly along the coastline.

The map is richly decorative, with a beautiful allegorical cartouche in the upper right featuring two putti on the wing and a seated, imperial woman, with a castle-crown surmounted with a star: Italia Turrita e Stellata, 'turreted and stellate Italy,' the allegorical personification of Italy. Seated with a cornucopia at her side, the Italia Turrita is an icon of Italian civic heraldry. Her walled crown appears in the iconography of many Italian cities, symbolically conveying the royalty and nobility of Italy as well as its agricultural abundance, and its notionally 'stellar' destiny.

On a scale less grand, in the lower left the scales of the map are given in French, Italian and German miles. These are displayed on a plinth, upon which a third putto plays with navigational instruments. De Wit's seas are plied by seven superbly engraved ships, and a fierce naval battle is shown in the Tyrrhenian Sea. Covens and Mortier have retained all these elements whilst adding two extra compass roses, and letters in the margin for use as coordinates. They have added a key on the lower right not present on the original De Wit as well, showing the symbols used on the map to indicate cities of varying sizes, bishoprics and archbishoprics, forts, and the roads.

De Wit's original engraving was done in and around 1680, the map being included in his atlases. After his death, the plate was sold to Peter Mortier, and reissued (thus amended) by his successors Covens and Mortier. We see only three examples of this map catalogued in OCLC, appearing in the University of Bern, the Bibliotheek Universiteit van Amsterdam, and the Sachische Landesbibliothek.