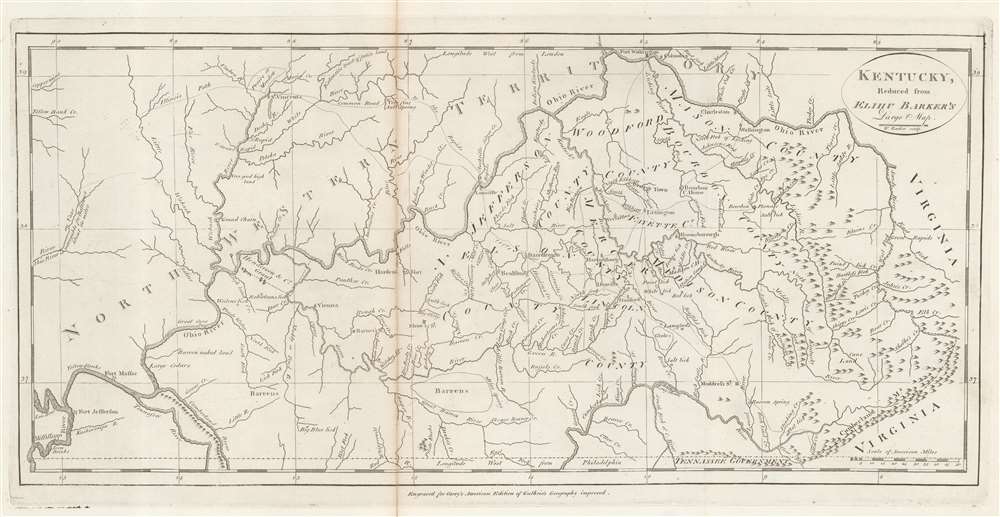 One of the earliest obtainable maps of Kentucky.

An example of Matthew Carey's 1795 reduction of Elihu Barker's map of Kentucky - one of the earliest obtainable specific maps of Kentucky based upon actual observation and settlement. It also follows closely on Kentucky's admission to the Union. The map is a reduced version of the unobtainable Elihu Barker map of 1793, entitled A Map of Kentucky from Actual Survey, by Elihu Barker, also published by Carey in Philadelphia. The present map has less detail, given the reduced size, but closely adheres to Barker's important map, described as 'so well done it cold be used today with satisfaction'. Throughout, settlements, stations, salt licks, courthouses, furnaces, springs, planned settlements, and forts are noted - providing an invaluable insight into life in Kentucky when it was still the 'frontier'.

The map notes most of Kentucky's 'Salt Licks', the result of a complex natural steam system, a boon to settlers and Native Americans alike. Kentucky's natural salt springs create these 'licks', a major draw to animals leading to a proliferation of game. This was a significant advantage to hunters and early settlers, who not only hunted at the licks, but also used the salt to preserve the meat. Early in the colonial period, enterprising settlers began to harvest the salt commercially, selling it throughout the colonies and creating the region's first industry. The Kentucky frontiersman Daniel Boone (1734 - 1820) wrote of the licks,

We found everywhere abundance of wild beasts of all sorts, through this vast forest. The buffalo were more frequent than I have seen cattle in the settlements, browsing on the leaves of the cane, or cropping the herbage on those extensive plains, fearless, because ignorant of the violence of man. Sometimes we saw hundreds in a drove, and the numbers about the salt springs were amazing.

The map names Henderson's Grant at the confluence of the Ohio and Green Rivers. The Grant refers to Richard Henderson (1735 - 1785), an American jurist and land speculator active in the 18th century. Henderson formed the Richard Henderson Company to capitalize on land in what is today western Kentucky. The company name changed to Louisa Company, and finally to the Transylvania Company on January 6, 1775. With considerable backing, Henderson purchased vast tracts of land from the local Cherokee. In June 1776, the Virginia General Assembly prohibited the Transylvania Land Company from making demands on settlers and in December 1778 declared the Transylvania claims void. Although the Virginia General Assembly refused to recognize the land purchase, they chose to honor part the claim in the form of their own October 1778 Grant. Henderson's Grant included some 200,000 acres, small compared to the original claim, but ratified by the commonwealth. The General Assembly believed that a large settlement at this juncture would increase trade and buffer against American Indian incursions from further west. It is this official 1778 grant that is recorded here.

This map was engraved by William Barker (fl. 1785 - 1803) for Matthew Carey's 1795 edition of Guthrie's Geography Improved, or as it is more commonly known Carey's American Atlas, considered the first general atlas published in America. It is one of several new maps drawn for the American edition, illustrating important points in the westward expansion of the fledgling United States. All maps from this atlas are considered important and desirable, but few more than the maps of Kentucky and Tennessee, then the frontier of American westward expansion.


Elihu Barker (17?? - 1792) was an English-American adventurer, engraver, and mapmaker active in Kentucky in the late 18th century. Little is known of Barker's life. Scholarship suggests he was born in England. He appears in Philadelphia as 'An Engraver for M. Carey' in the 1790s. His is best known for 'surveying' and producing the first serious large-scale map of Kentucky - a remarkable achievement for the time. Barker, must have moved to Kentucky in the 1770s or early in the 1780s to work on this map. He died in Philadelphia in 1782, a year before his great map was published. Promotion of the map was taken over by his son, Oliver Barker, a resident of Kentucky. Another of Barker's sons, William Barker (June 29, 1770 - April 19, 1805, engraved the map and followed in his father's footsteps, becoming an engraver for the Carey firm. Learn More...