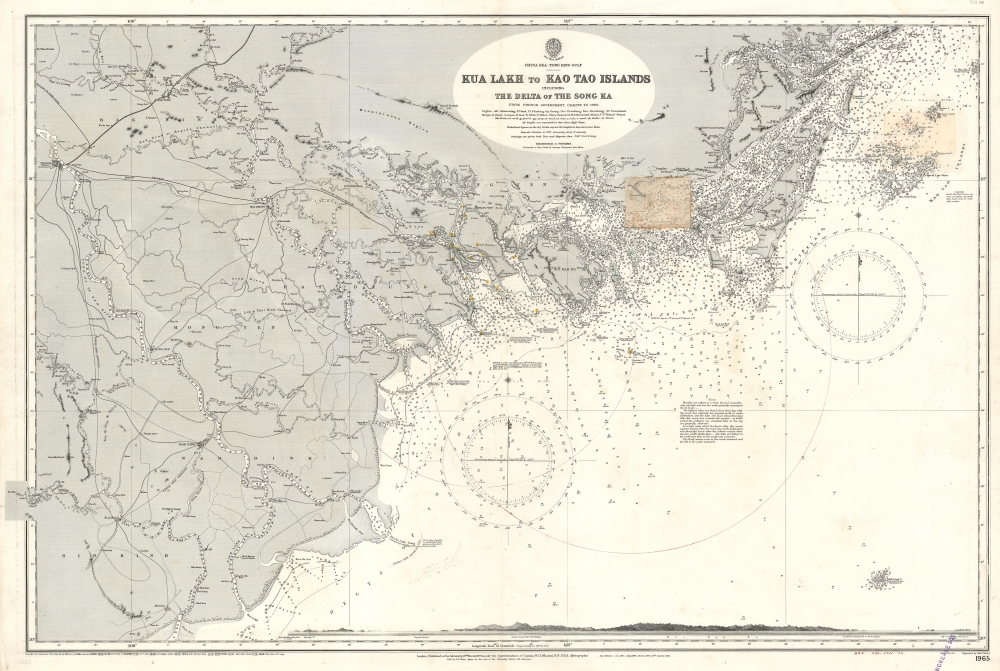 This is a 1926 British Admiralty nautical chart or maritime map of northeastern Vietnam in the vicinity of Hanoi and Ha Long Bay. The map depicts the region from Hanoi to Thanh Lan Islands and from north of Cam Pha to Bach Long Vi Island. Although the South China Sea is currently a hotbed of international disputes between numerous countries, particularly with regard to territorial control over different islands and archipelagos, Bach Long Vi Island is not one of these islands. China gave Bach Long Vi to the city of Haiphong City in 1957, and it remains a district of Hai Phong to this day.

Highly detailed, myriad depth soundings are indicated throughout, with particular attention paid to Ha Long Bay and vicinity. The mouth of the Bach Dang River is also particularly well charted. Lights situated at the river's mouth are marked with yellow dots, allowing them to be easily spotted by anyone using the chart. Roads and railways are also illustrated. Two paste-downs, situated in the upper-right quadrant, highlight areas on the chart that underwent significant change at one point.

This map was created by the British Admiralty, engraved by Edward Weller, and published in 1926. The first edition was published by the Admiralty on March 19, 1894, and several editions were published in the intervening years. No records of this chart are registered in the OCLC.