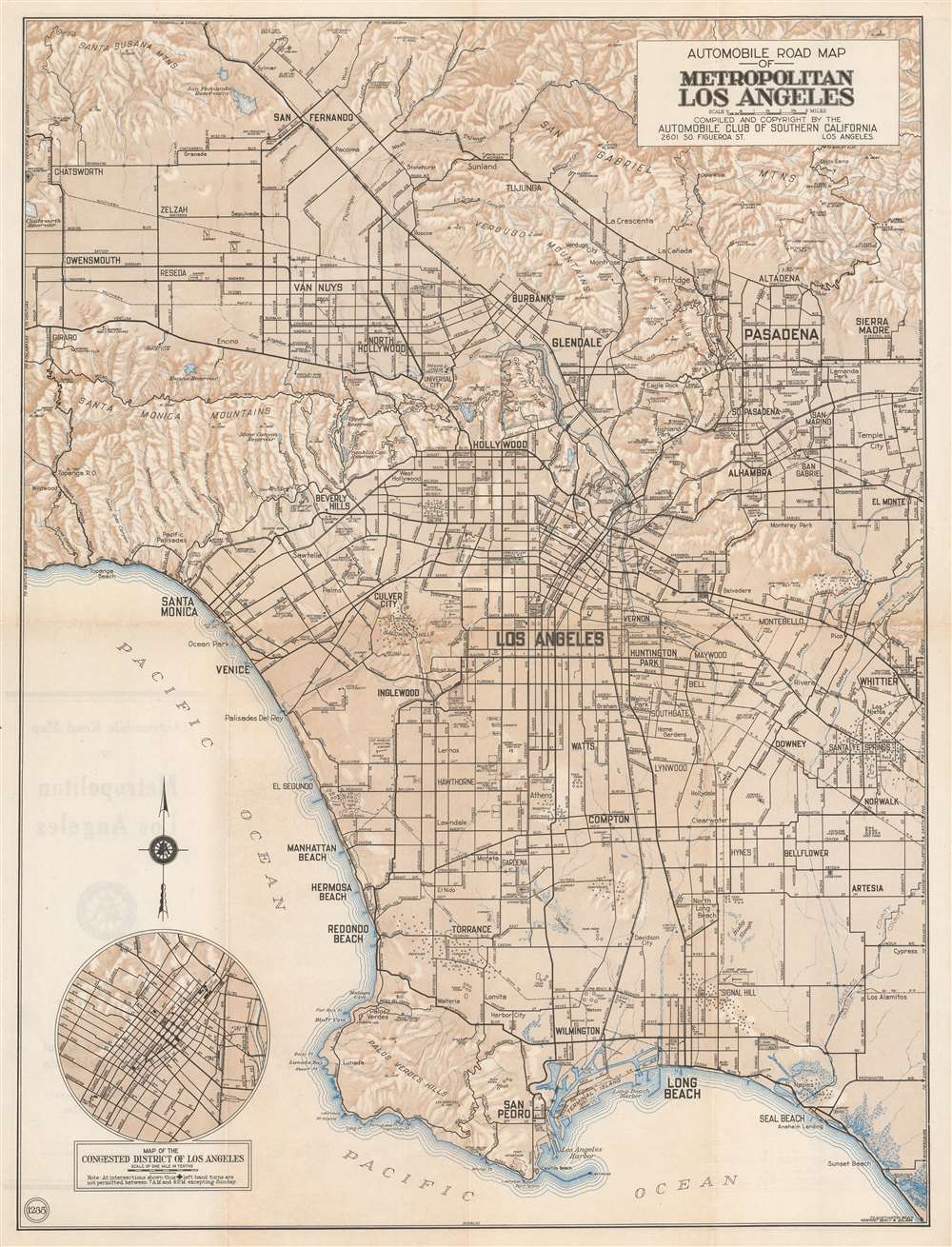 Includes an inset of the 'congested district of Los Angeles'.

This is a c. 1930 Automobile Club of Southern California city plan or map of Los Angeles, California. Depicting the region from the Santa Susana Mountains and San Fernando to San Pedro and Long Beach and from Oakwood Cemetery and Chatsworth Reservoir to Whittier and El Monte, Los Angeles, Pasadena, Glendale, Compton, Inglewood, Beverly Hills, Venice, Santa Monica, and Hollywood rank among the identified cities. Only major streets are illustrated and labeled. Small circles mark several oil fields, including the Redondo Oil Field and the Rosecrans Oil Field. Other than the oil fields, airports, cemeteries, a couple of high schools, and golf courses are highlighted. The Hollywood Bowl, in the Santa Monica Mountains above Hollywood, also appears. Peaks are identified in the San Gabriel Mountains, and the elevations for mountains are given in the Santa Monica Mountains and the Santa Susana Mountains. An inset in the lower-left corner detailed the 'congested district of Los Angeles' and even marks intersections where left-hand turns are not permitted between 7 a.m. and 6 p.m. except on Sundays.

This map was created and published by the Automobile Club of Southern California c. 1930. It is not cataloged in OCLC and appears on the private market from time to time.

The Automobile Club of Southern California (1900 - Present) is an auto club based in Los Angeles, California and an affiliate of the American Automobile Association (AAA). Founded in 1900, it was one of the first auto clubs in the United States and was dedicated to proposing traffic laws, improving road conditions, and the overall improvement of driving conditions. The Auto Club began producing its own maps in 1910, when it sent out its own team of cartographers to survey the state's roads. Its main office at the corner of Figueroa Street and Adams Boulevard was completed in 1923. Numbering nearly 8 million members in its home territory alone, today it is the largest single member of the AAA federation Learn More...