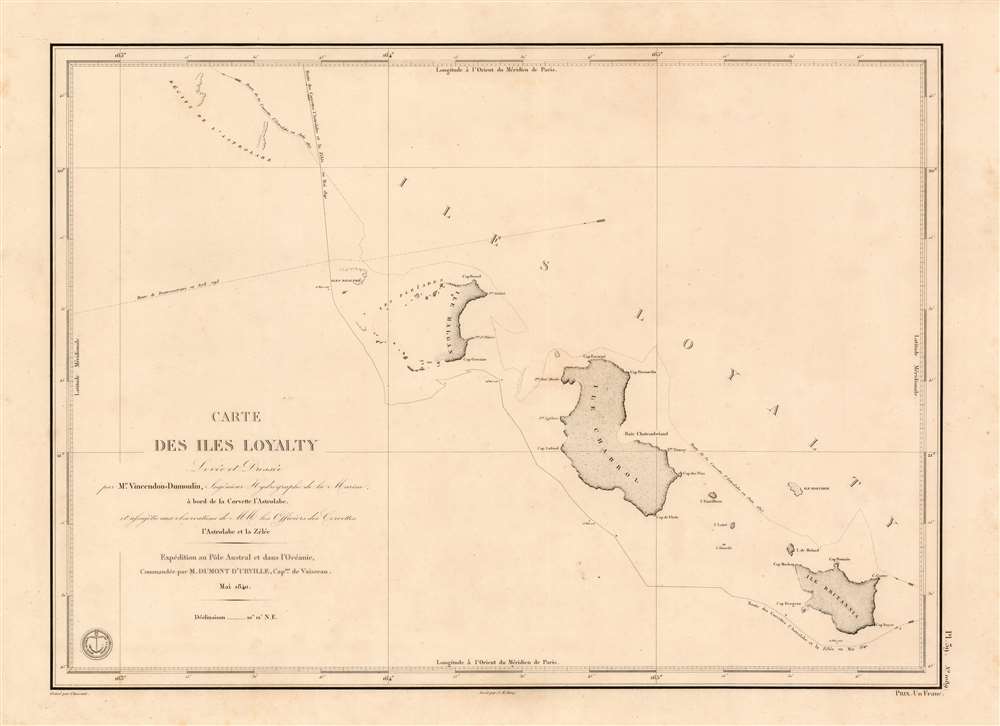 Charting both Visits of D'Urville to the Loyalty Islands.

This is the earliest acquirable detailed chart of the Loyalty Islands (northeast of New Caledonia). It was executed in 1840 by the naval hydrographer Clément Adrien Vincendon-Dumoulin, who participated in the second voyage of the French corvette L'Astrolabe under the command of Jules Sébastien César Dumont d'Urville (1790 - 1842). While the primary goal voyage was the discovery of a presumed southern continent (Antarctica?), the expedition was notable for its contact with many Pacific islands en route. Vincendon-Dumoulin was highly praised for his work during the voyage, both in regard to his surveys of new coastlines from land, and his innovations in charting coastlines whilst under sail. The chart details the islands of Ile Ouvéa, Ile Lifou, and Ile Maré (named Ile Haglan, Ile Chabrol, and Ile Britannia on the chart) along with some other smaller islands in the archipelago. Vincendon-Dumoulin includes the tracks not only of the 1840 expedition he attended, but also the track taken by L'Astrolabe in its earlier 1828 Pacific voyage. A further track is shown: that of Antoine Raymond Joseph de Bruni d'Entrecasteaux (1737 - 1793), who undertook a journey to the Pacific in 1792 - 1793 in search of the lost expedition of La Perouse(1741 - 1788), whose ship, L'Astrolabe, was the namesake of the lead vessel in D'Urville's journeys.

This chart was engraved by Chassant in 1847 for inclusion in the mammoth Voyage au pôle Sud et dans l'Océanie sur les corvettes l'Astrolabe et la Zélée. The lettering was engraved by Jacques-Marie Hacq. The text is well represented in institutional collections. The separate chart is catalogued twice, in the British Library and in the National Library of Australia.

Clément Adrien Vincendon-Dumoulin (March 4, 1811 - May 12, 1858) was a French Naval hydrographer and engineer. Among other voyages, he took part in the Dumont d'Urville expedition in Antarctica, during which he made the first calculation allowing to locate the magnetic South Pole on January 23, 1838. He was educated at the École Polytechnique in 1831, and upon completion of his education joined the surveyors engineers of the Navy. Between 1834 and 1836 he participated in the regular survey of the western coasts of France. In 1837 Admiral Ferdinand Hamelin recommended him to Dumont d'Urville as 'a wise and industrious man who will do us a good job', and as a result was appointed to embark as hydrographer on L'Astrolabe for its second journey under Dumont d'Urville, accompanied by the ship Zélée. It was during this navigation of more than 3 years that Adélie Land in Antarctica ) Vincendon-Dumoulinhe was credited as the first Frenchman to see Antarctica, having climbed the rigging to do so. During the expedition's return via the Pacific, he executed maps of many of the ill-charted islands the two ships encountered. Vincendon-Dumoulin made a point of calculating the longitude and latitude of each stopover. For coasts at which he was unable to disembark, he improved processes of measuring and drawing them without having predetermined points available for reference - allowing the execution of maps while under sail: a great advantage in naval intelligence gathering. Dumont d'Urville would go on to praise the hydrographer in his history of the voyage, saying the appointment of its hydrographer 'served me beyond all my expectations'. His fame was such that Jules Verne, in 'Twenty Thousand Leagues Under the Sea' would have his Captain Nemo praise 'the excellent maps of the Torres Strait drawn up and drawn up by the hydrograph engineer Vincendon-Dumoulin.' Learn More...