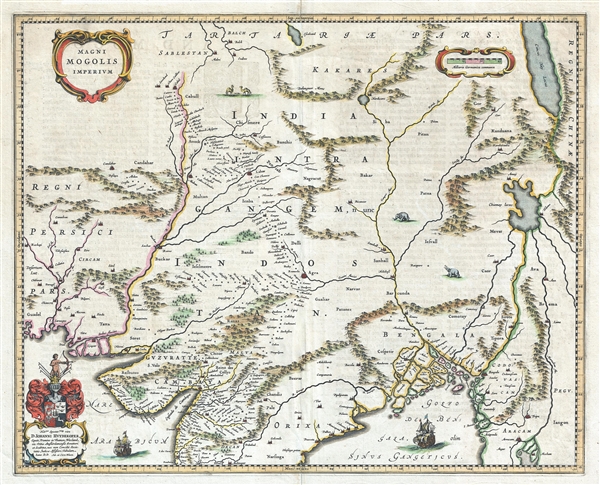 Wonderful map of northern India intended to illustrate the trade potential of the region.

A marvelous 1640 map by Joan and Cornelius Blaeu representing the kingdom of the Great Mogul in northern India. Extending from the Indus River Valley to the Irrawaddy River Valley and from Tibet to Bombay, this map covers much of modern day India as well as parts of adjacent Pakistan, Afghanistan, Nepal, and Tibet. Caravan routes are clearly apparent as chains of small cities, for example from Agra, across Rajasthan to Jaisalmer (Gislemere). Beautiful engraved sailing ships fill the seas and animals, including camels and elephants, decorate the land.

The Empire of the Great Mogul was founded at the outset of the 16th century and extended from present day Afghanistan to Dacca, Bangladesh. The Empire was of great commercial to English and Dutch trading concerns, which doubtless this map is intended to court. Much of the cartography here is based upon the 1618 Willliam Baffin, who in turm received reports from Sir Thomas Roe. Roe was the ambassador of King James I of England the Mogul Emperor Jahangir c. 1615.

Blaeu offers a striking depiction of the apocryphal Lake of Chiamay appears just north of the Bay of Bengal as the source of four important Southeast Asian river systems including the Irrawaddy, the Dharla, the Chao Phraya, and the Brahmaputra. The curious Lake of Chiamay (also called Chiam-may or Chian-may), roughly located in the area of Assam but sometimes as far north as Tibet and China, began to appear in maps of this region as early as the 16th century and persisted well into the mid 18th century. Its origins are unknown but may originate in a lost 16th century geography prepared by the Portuguese scholar Jao de Barros. It was speculated to be the source of five important Southeast Asian River systems and was mentioned in the journals of Sven Hedin, who disputes the notion. There are even records that the King of Siam led an invasionary force to take control of the lake in the 16th century – although this may in fact be a reference to the conquest of Chaing Mai. Nonetheless, the theory of Lake Chiamay was ultimately discredited and largely disappeared from maps entirely by the 1760s.

This map was prepared by Joan and Cornelius Blaeu, sons of Willem Janzoon Blaeu, for publication in the 1640 French edition of the Atlas Maior.

Blaeu, W., Atlas Major, (Amsterdam) French Edition, 1640.     In 1662 Joan Blaeu published his masterwork, which has been described as 'the greatest and finest atlas ever published' (Verwey, 1952): his monumental, eleven-volume Atlas Maior. This contained nearly six hundred maps, more than two hundred in excess of the Blaeus' mainstay the Atlas Novus. The former work already being renowned for the quality and beauty of its maps, Blaeu not only would add copious material but would improve the sophistication of his work: many of the newly-added maps utilized larger-sized presses and sheets, and the artistry applied to the engravings was often far superior to that of the earlier maps in the atlas - many of which by now were thirty, and some more than fifty years old. Blaeu's Atlas Maior was published from 1662 to 1672, consisting of some 594 maps compiled into upwards of 9 volumes with some editions containing as many as 12 volumes. This triumphant work's publishing life was cut violently short when, in 1672, the Blaeu's mammoth workshop was destroyed by fire; surviving stock would be sold at auction between 1674 and 1677, occasionally appearing under the imprint of later Dutch printers such as Pieter Schenk and Pieter Mortier. The maps added to the Atlas Maior, owing to their tragically short publishing life, are among the hardest-to-find of the Blaeu maps.