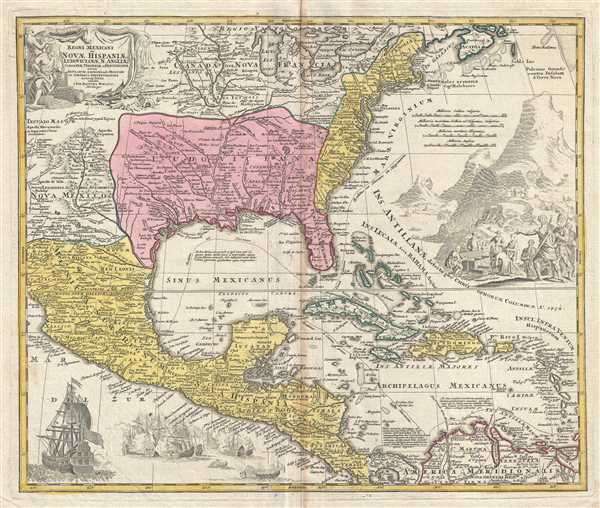 A fine decorative map depicting colonial America during the Spanish War of Succession.
$2,400.00

This is a 1715 J. B. Homann's decorative map of Mexico, Florida, New England, the West Indies, and the Mississippi Valley (Louisiana). Centered on the Mississippi River Valley, Homann's map depicts from Sinaloa (Mexico) eastwards to the Atlantic Coast and from the Great Lakes to the Spanish Main (Venezuela) inclusive of Florida, the West Indies, Central America, and the British Colonies along the Atlantic seaboard. In general, Homann derived this map from Guillaume De L'Isle's influential 1703 map of the same region. Other influences include the explorations of La Salle, Bienville, d'Iberville, Le Sueur, and Lederer, as well as the apocryphal tales of the 17th century English traveler Brigstock.

The map features elaborate decorative cartouche work. In the upper right quadrant, an engraved view illustrates European unloading chests of gold from a mine set in the background while indigenous American Indians look on. The other decorative engraving, in the lower left quadrant illustrates a large warship, most likely British or French, bombarding a smaller, undoubtedly Spanish, fleet. Taken together these cartouche elements hold the key to understanding the cartographic message as well as the hopes and dreams instilled into this map.

Europe at this time was embroiled in the Spanish War of Succession in which the young Phillip V of Spain was attempting to assert claims to the French throne of his grandfather, Louis XIV, essentially creating a Franco-Spanish mega state. The ramifications for the French in the Americas included nearly losing control of Louisiana to which the Spanish were asserting claims based on the outdated 1494 Treaty of Tordesillas. Fearing the political influence of a Franco-Spanish state, other European powers blocked the union confirming French hegemony over Louisiana in the Treaty of Utrecht.

The Louisiana in question was a vast and potentially resource rich territory for with Louis XIV had great hopes. On our map Louisiana follows the pro-French borders as laid down by De L'Isle in 1703, with French claims extending from the Rio Grande (Rio del Norte) to the Appalachian Mountains, including Florida. Further French claims also extend northwards in the form of 'Canada Nova Francia' and include all five of the Great Lakes as well as the vital St. Lawrence River trade artery. Louis XIV sent Pierre le Moyne d'Iberville to examine and report on the exploitable resources of the Louisiana region, particularly furs and ore, as well as to set the stage for further colonization. Iberville established Fort Maurepas (near Biloxi, Mississippi) and Fort St. Louis (what is today Mobile, Alabama), both strategically positioned to receive goods from the interior and present a strong front to the local American Indians. While the hoped-for mineral wealth never appeared, the potential for the Mississippi River to become a vital trade artery for fur-wealth of the French of Nova Francia (Canada) was readily apparent. Success in this endeavor however would require enormous resources that the French crown, strapped after years of war, could not produce. Instead the exploitation of Louisiana fell to private investors, first under Antoine Laumet and Antoine Crozat and later under John Law's Compagnie d'Occident. Stock speculation in the ill-fated Compagnie d'Occident instigated one of the world's first bubble economies, known today as the Mississippi Bubble.

To the west and south Nova Mexico, Mexicana, Nova Hispania, an America Meridionalis (South America) remained firmly under Spanish hegemony. Here the mineral wealth hoped for in Louisiana was found in plenty with vast silver and gold reserves discovered in central Mexico, Peru, and Bolivia. While the acquisition was easy, Spain's greatest challenges lay in the transport of its wealth back to Europe. Following the dotted line, Homann identifies the Spanish treasure fleet's entrada into the Caribbean via the passage between Granada and Trinidad. The fleet then sailed westwards, skirting the Spanish Main until they reached Cartagena, where they rested and provisioned before heading northwards, rounding western Cuba and stopping in Havana. Using the strong Gulf Stream current, ships would sail northwards from Havana while being steadily forced to the southeast, thus alighting at the well-defended deep water port of Veracruz, Mexico. On the return, laden with silver from the mines of Spanish America, the Spanish fleet took advantage of eastward blowing trade winds, which helped to overcome the strong current on the sail to Havana. From Havana, they would travel northwards via the narrow passage between Florida and the Bahamas before cutting eastward and out to sea at St. Augustine. It was here, in this crucial passage between the English dominated Bahamas and Spanish Florida, where the most nefarious pirates and privateers lay in wait for their profitable prey.

There arenumerous other elements of interest throughout. In Nova Mexico, the legendary apocryphal kingdoms of gold, Quivara (just under the title cartouche) and Teguayo (Teguail Maior) are identified. La Salle's misplaced colony in modern day Texas is here identified as 'Fort Francois'. In the British Colonies, New York (Manhata) and several early settlements on Long Island, including Bedford and Southampton are identified. The Carolinas are rendered following the John Lederer model, divided according to the grants of the Lords Proprietors with such interesting addition as the 'Deserta Arenosa' (here Deserta Akenatzy). Also shown is the 'Great Lake of the Southeast', here named Matiqui, located just west of the Appalachians – also perhaps a reference to Lederer, who placed the lake in a mountainous region. A secondary speculative lake, following Gerard Mercator's model of 1606, appears further west as the source of the Apalachicola River. Most of the information associated with this second 'Lake of the Southeast' relates to the questionable adventures of Brigstock.

All in all this is a fine map of the region and far more decorative, in the German style of Homann, than the source map by De L'Isle. This map was included various Homann atlases as well as sold separately.