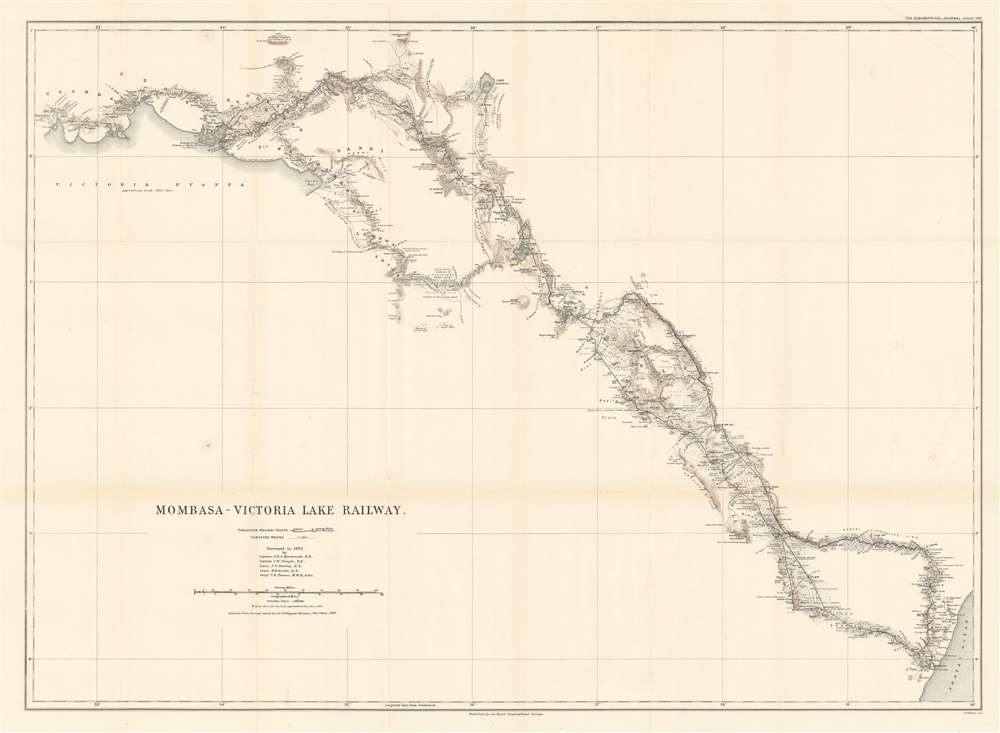 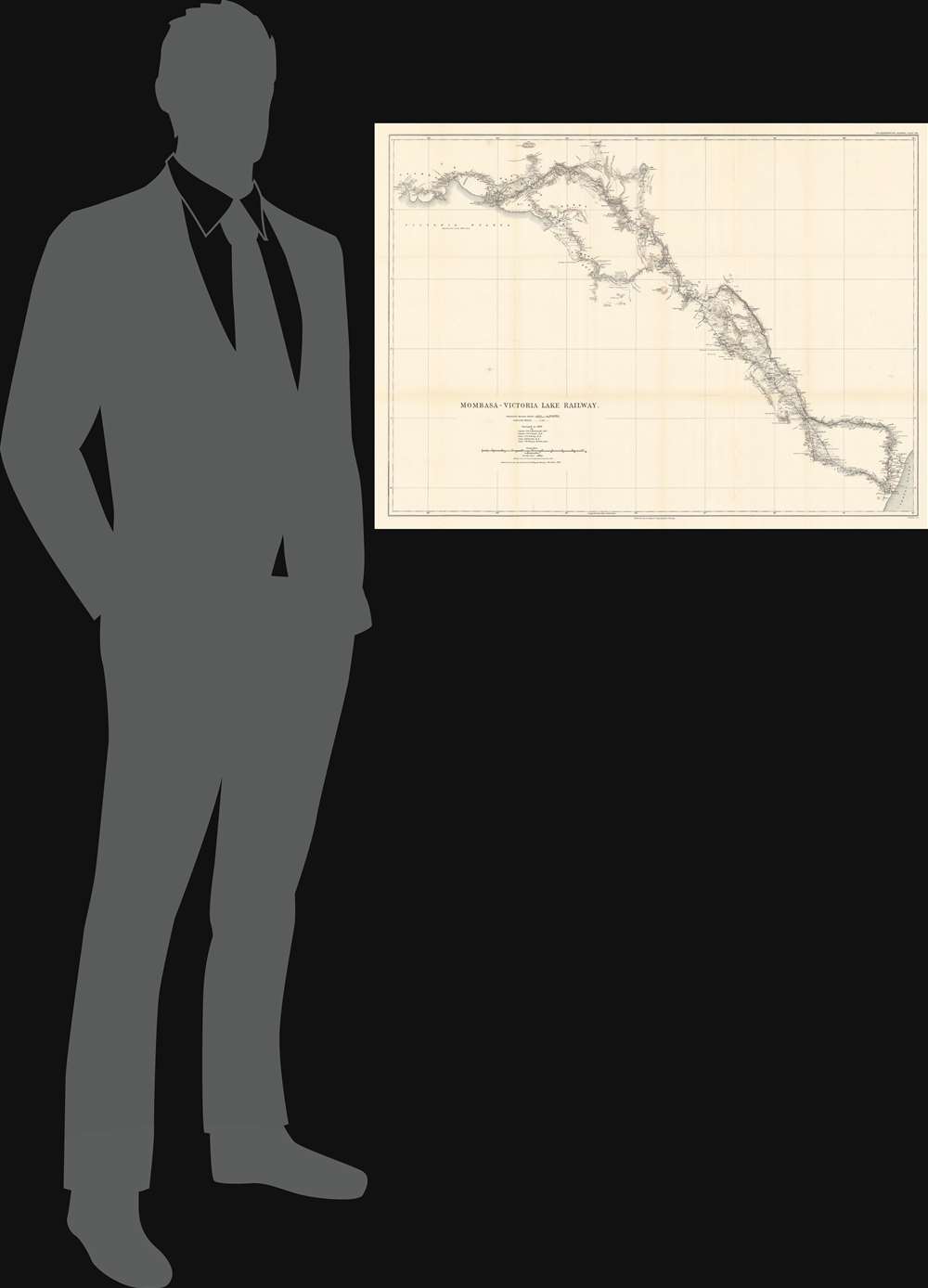 The only railroad built in tropical Africa during the 'Scramble for Africa'.
$650.00

This is an 1893 Royal Geographical Society map of the Mombasa-Lake Victoria Railway in modern-day Kenya. The map details the early planning and construction stages of one of the worlds more infamous and loved heritage railroads, the famed 'Lunatic Line'. Parts of the railroad still run.

This map presents the survey work conducted by a team of five men, four of which were royal engineers, between Mombasa on the Indian Ocean and Kisumu on the shores of Lake Victoria. Both the projected and surveyed routes are illustrated here, with solid black lines marking projected routes and dotted lines following surveyed routes. Stations are marked along the projected lines, while the camps used by the surveyors are identified along their route. Rivers, lakes, and other topographical features are noted and numerous printed notations comment on the vegetation, terrain, and indigenous inhabitants.

Construction began on the Uganda Railway, the only strategic railway constructed in tropical Africa at the time, in 1896. Built during the 'scramble for Africa', the railroad began operation in 1901, after suffering significant human losses due to disease, tribal resistance, and hostile wildlife, including the infamous man-eating Tsavo lions. All these factors, plus the exorbitant cost, earned the railroad the nickname Lunatic Line. Other than the obvious commercial impact, the Uganda Railroad also became an inseparable part of safari expeditions around the turn of the 20th century. Even former U.S. President Theodore Roosevelt rode on the train, reportedly spending most of his time riding on the platform attached to the front of the locomotive.

The 'scramble for Africa' officially began with the 1884-85 Berlin Conference. The Berlin Conference was a meeting of colonial powers in Berlin during the New Imperialism Period. The resultant 'General Act of the Berlin Conference' is considered to be the formalization of the 'Scramble for Africa', wherein much of Africa was partitioned between major European powers (with little regard to the claims and priorities of the indigenous peoples). To claim territory, the delegates needed to prove 'effective occupation.' This means they needed to establish the existence of treaties with local powers, show that their flags were being flown (hence the identification of various flags on this map), or have active forts in the region. The conference marked a major change in the European approach to Africa. Initially European powers treated African peoples much like Native Americans, establishing trading relationships and alliances with indigenous kingdoms. After the Berlin Conference, heightened colonial activity and the need to prove effective occupation lead to the subjugation of most indigenous control.

This map was created and published by the Royal Geographical Society for publication in the August 1893 edition of The Geographical Journal from a map issued by the Intelligence Division of the War Office. Two examples are catalogued in the OCLC as being part of the collections at the University of Chicago and the University of Oxford.


The British War Office (1857 - 1964) was a department of the British Government responsible for the administration of the Royal Army until 1964, when its functions were transferred to the Ministry of Defense. The War Office was to the Royal Army what the Admiralty was to the Royal Navy, and later, the Air Ministry. Within the War Office, the General Staff Topographical Section was responsible for thousands of maps issued for British intelligence and military use. The Topographical Section was renamed Geographical Section in April 1907. Many, once their military use passed, were offered through licensed agents to the general public. The sole London agent for War Office material was Edward Stanford. Learn More...