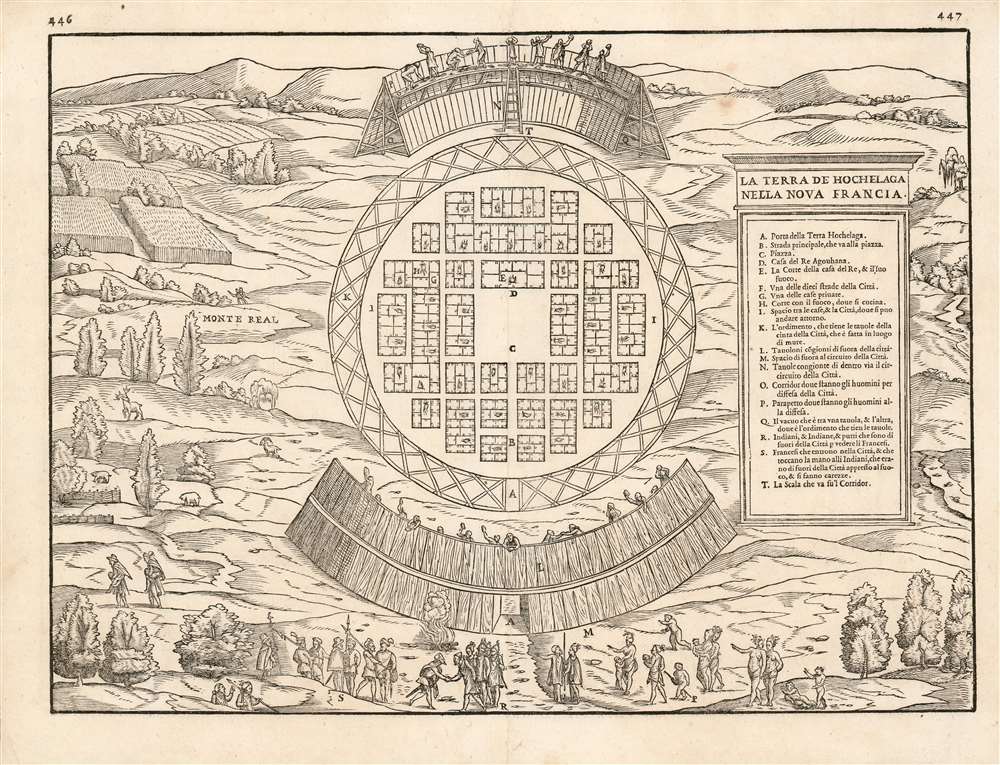 Capturing a glimpse of Cartier's meeting with the St. Lawrence Iroquois.
$4,500.00

This is an attractive example of the scarce first map of 'Montreal.' Printed in 1565, it is what Schwartz calls 'The very first plan of a village in the United States or Canada,' and it is the earliest printed map to use the place name 'Monte Real,' which would become Montreal. Perhaps even more significantly, this woodcut is one of the only images from the Discovery Period of an intact indigenous town, and its customs.

In a scene that suggests a more promising start to European/ Native American relations than perhaps would prove to be warranted, Cartier is shown at lower center being greeted with evidence friendliness by the St. Lawrence Iroquoian chief, or 'Agouhanna'. (Though the map's text suggests that this was the Iroquoian king's name, such was not the case. Cartier's Bref Recit Et Succincte Narration de la Navigation more correctly named the man: '...le seigneur de Canada nomé Donnacona en nom, et l'appelent pour seigneur Agouhanna...' translating to: 'the chief of Canada, called Donnacon by name, and called Agouhanna for chief.') The peacefulness of the scene is emphasized by the presence of a crowd of women and children who have ventured outside the city to see the French.

A Glimpse of Iroquois Life

In providing the first European visual depiction of a Native American town, this woodcut also provides some of the only documentation of St. Lawrence Iroquois life. Certainly, we are presented with a society organized for its own defense: central to the view are a detailed depiction of the town's wooden stockade, replete with a parapet and gangway for defenders. The town itself is represented as orderly, with streets and a central square; a house for the king and his father faces on to the square. The plan indicates the presence, also, of private homes, each with its own cooking hearth - some shown to be separate, some connected to each other, none significantly less grand than that of the King himself. Outside the stockade are shown fields under cultivation, and areas fenced in for the control of game. In the lower left, we see two adults being carried piggyback: Cartier refers to this as a Hochelagan gesture of respect - following their visit, Cartier and his companions were carried back to their boats by their hosts. The Agouhanna himself had been brought from the city to the French on the shoulders of nine or ten men. The social order implied in the view suggested that the Iroquois might be a people with whom the French could profitably interact, while the freedom apparently exhibited among the native's women would have told a 16th century European that here was a people who would benefit from the strictures of Christianity.

This map was first engraved by Matteo Pagano for inclusion in the third volume of Ramusio's Navigationi et Viaggi in 1556. The woodblocks for this, and indeed all of the maps of the 1556 edition burned in a warehouse fire in 1557. It appears in only one known state. The blocks were all re-engraved, probably again by Pagano, for the 1565 edition of the Navigationi et Viaggi. This second block is geographically identical to the first, but there are distinguishable changes; the two blocks are most easily differentiated by the addition of a willow tree on the new version at the upper right, as well as the opacity of the smoke from the fire by the entrance of the stockade. Also, the letter 'F' corresponding to the map's key is missing on this second block. This block was employed one more time in 1606, this edition easily identifiable by the small worm-shaped blank areas visible on the map (woodworm appears to have similarly infested all blocks of the 1606 edition.) The 1556 edition of the third volume of Navigationi et Viaggi. is rare. Seven examples of the 1565 are listed in OCLC, while perhaps twenty of the 1606 edition appear in institutional collections. The 1565 edition of the separate map appears only at the Library and Archive of Canada; only five other examples of the other editions appear in OCLC.