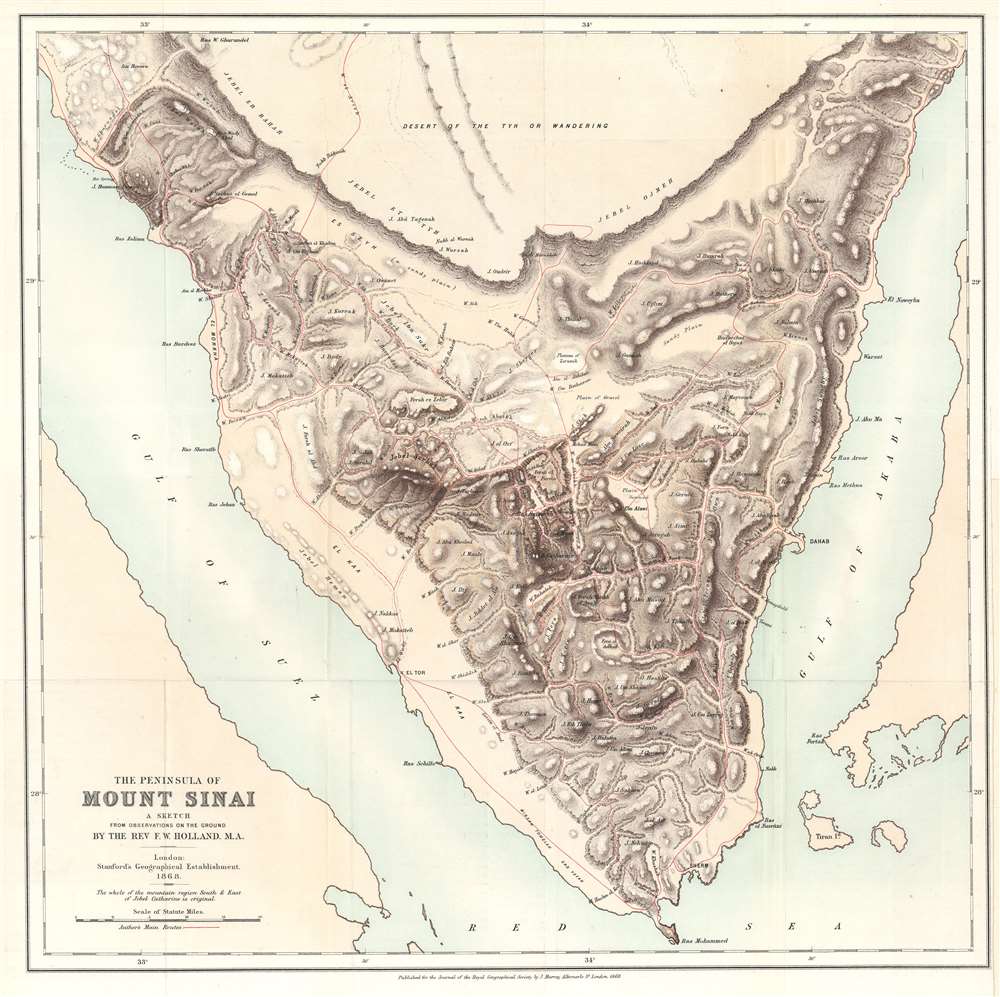 This is Frederick Whitmore Holland's 1868 map of the Sinai Peninsula. The peninsula's mountainous terrain is illustrated in detail, with numerous peaks labeled with transliterations of their Arabic names. Holland traces the many wadis (valley, ravine, or channel that is dry except in the rainy season) and provides some commentary on the terrain. Mount Sinai, labeled here as J. Musa (its Arabic name), appears just south of the center of the peninsula.

Described as a 'valuable map of the Peninsula' by the Royal Geographical Society, Holland undertook a 'preliminary exploration' of the peninsula, entirely on foot, to create this work. He believed the most important aspects of this expedition were

tracing out its main wadys, which form the roads, fixing the positions of the most prominent mountains, and determining more accurately the Arabic names.

Red lines on the map trace Holland's 'main routes,' although his smaller side trips are not noted. Holland states that the map is 'a record of what I saw and sketched on the spot' and that he 'always travelled with [his] compass, watch, and note-book…sketching the country roughly in as [he] walked along.'

This map was created by Frederick Whitmore Holland and published by John Murray in the 1869 edition of The Journal of the Royal Geographical Society, Volume the Thirty-Ninth. Two examples are cataloged in OCLC and are part of the institutional collections at Stanford University and the State Library of Victoria. Another example is also part of the collection at Princeton University.

Frederick Whitmore Holland (1838 - August 27, 1881) was an English minister and traveler, particularly to the Sinai Peninsula. Born in England, Holland attended Eton and Trinity College, where he earned a Bachelor of Arts in 1860 and a Master of Arts in 1864. Holland was ordained in 1862 and served as Curate of St. Andrew in Manchester from 1862 - 1865, Assistant Minister of Quebec Chapel from 1865 until 1872, and as Vicar of Evesham beginning in 1872. Holland first visited the Sinai Peninsula in 1861 and went back again in 1865. He read an account of his second journey to the Sinai at the Royal Geographical Society (RGS) in 1866. Holland read a subsequent paper to the RGS in 1868 and published a 'valuable map of the Peninsula' in the 1869 volume of the Geographical Journal. Holland played a major role in raising the Sinai Survey Fund, which he accompanied as a volunteer, about which he present another paper to the RGS in 1869. He traveled to the Sinai Peninsula six times over the course of his life. Holland was elected a Fellow of the Royal Geographical Society in 1867. Holland died suddenly, likely of a heart attack, near Thun, Switzerland. Learn More...

Holland, F. W., 'Notes on the Map of the Peninsula of Sinai,'The Journal of the Royal Geographical Society. Vol. 39. (London: John Murray) 1869.