1870 Baur and Bromme Map of the World on Mercator Projection 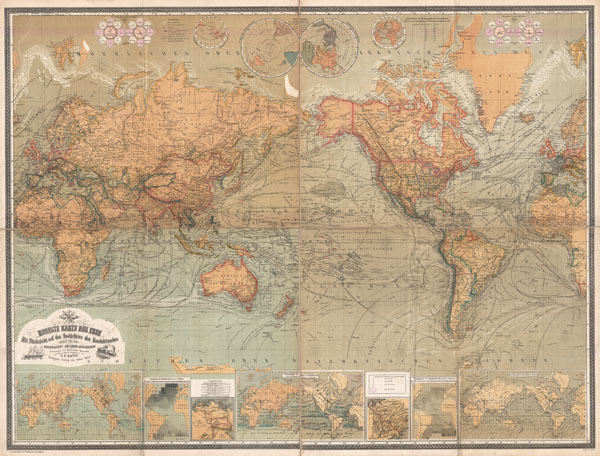 1870 Baur and Bromme Map of the World on Mercator Projection

Astoundingly complex and monumentally proportioned German map of the world.

A vastly complex and enormously proportioned c. 1870 German map of the world by C. F. Baur and Traugott Bromme. Printed in c. 1870 in a multi-toned lithographic process this extraordinary map presents the world on a Mercator Projection. Designed with a educational purposes in mind, Baur manages to incorporate a staggering wealth of informative detail into ever corner of this map. The world is depicted according to the political conventions of the late 19th century. While most of the world had been explored by the late 19th century, this map does offer some interesting speculative land masses in the Arctic including Gillis Land (named after a c. 1707 whaler who supposedly spotted it) and a mysterious land mass to the northwest of the Behring Strait. The Canadian Arctic is remarkable well mapped though the whole region is shows to be locked down in glacial ice. In contrast Antarctic exploration was still in its infancy, though parts of the Antarctic coast line are noted to the south of Australia and off the coast of Tierra del Fuego. Throughout there is an attempt to map currents and wind patterns. Various explorers routes, including Cook, Biscoe, Tasman, Wilkes, Vancouver, the Resolution, Wallis, Boupet, Diego Alvarez, Bligh, Boulton, and many others. This also identifies the Saragasso Sea and another similar vortex in the Pacific. The border regions of the map are occupied by a series of smaller maps and charts including polar projections, an isothermal chart, a winds chart, an inset of Panama and Suez, two weather charts, and a magnetic variation chart. The title cartouche, appearing in the lower left quadrant shows a shop and a train as well as curious logo that seems to embraced the realms of navigation and science.

Carl Fredrich Baur (fl. c. 1850 - 1900) was a German map publisher active in Stuttgart during the mid to late 19th century. Baur was little known outside of Germany but nonetheless produced a number of important map most of which had a thematic or historic context. His most notable work is most likely the 1857 Atlas fur Handel und Industrie fur Kaufleute, Fabrikanten und Gewerbetreibende, one of the first industrial and commercial atlases of the 19th century.


Traugott Bromme (1802 - December 4, 1865) was born in Anger Germany. In 1820 he relocated to the United States where he traveled extensively. As an immigrant to the United States he faced many of the challenges that modern immigrants face to this day, language issues, lack of jobs, and strange rules and customs. Nonetheless Bromme prospered, having many adventures including working as a surgeon on a Columbian war-schooner, cruising the West Indies, and being imprisoned in Haiti. In overcoming many of these issues Bromme composed what is most likely his most important work, a handbook for German emigrants, Hand-und Reisebuch fur Auswanderer nach den Vereinigten Staaten von Nord Amerika, Texas, Ober- und Under-Canada, Neu-Braunschweig, Neu Schottland, Santo Homans in Guatemala und de Mosquitokusten. Upon his return to Germany in the late 1840s he became a book and map publisher with a small but important corpus of work.

Very good. Of the four panels, the lower left exhibits a bit less toning than the other three. Each panel has a centerfold.