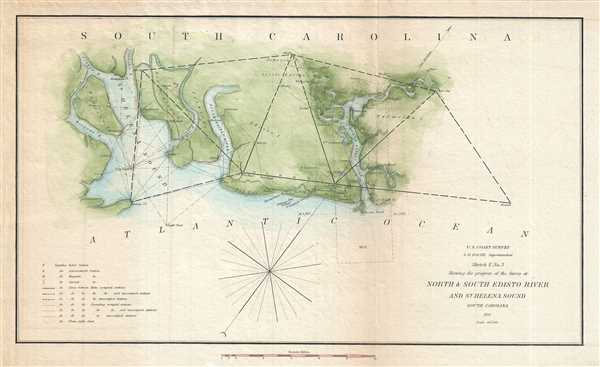 This is an attractive 1851 U.S. Coast Survey triangulation chart of the Coast of South Carolina between St. Helena's Sound and North Edisto River. Focuses on the inlets and waterways on Morgan’s Island, Hutchinson’s Island, Fenwick’s Island, Wadmelaw Island and Edisto Island, specifically studying the course of the North Edisto River and South Edisto River and St. Helena Sound. Notes tidal, astronomical and magnetic stations. Progress maps of this sort were made to illustrate work of the survey and accompanied the Superintendent of the Survey's annual report to Congress. The chart was compiled under the direction of A. D. Bache, Superintendent of the Survey of the Coast of the United States and one of the most influential American cartographers of the 19th century.