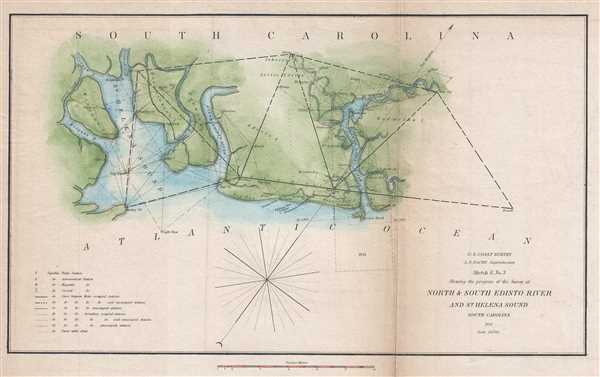 Triangulation chart of part of South Carolina's coast near Charleston.

This is an attractive 1851 U.S. Coast Survey triangulation chart of the coast of South Carolina between St. Helena's Sound and the North Edisto River. The map depicts from St. Helena Sound to the North Edisto River and focuses on the inlets and waterways on Morgan’s Island, Hutchinson’s Island, Fenwick’s Island, Wadmelaw Island, and Edisto Island. Tidal, astronomical and magnetic stations are noted. Progress maps of this sort were made to illustrate work of the survey and accompanied the Superintendent of the Survey's annual report to Congress.

Very good. Backed on archival tissue for stability. Minor wear and toning along original fold lines.
Looking for a high-resolution scan of this?