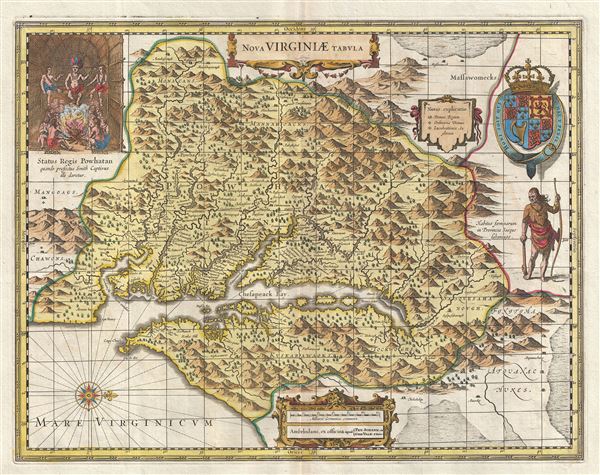 The scarce last derivative of Smith's map of Virginia.

A fine example of the scarce c. 1694 Schenk and Valk map of Virginia and the Chesapeake Bay. Oriented to the west, this map covers from Cape Henry to the Susquehanna River and inland as far as the Appellation Mountains. The Chesapeake Bay is shown in full as are many of its river estuaries, though topographically this map places a number of mountain ranges where there are in fact none. Cartographically this map the second state (Valk and Schenk) of the 5th derivative (Hondius, 1618) of John Smith's landmark map of the Virginia colony issued in 1612. Smith's fine cartographic work, as well as reports from indigenous American Indian tribes, and fanciful wishful thinking, combine to make this one of the most interesting maps of America to emerge in the 17th century. Philip D. Burden, the author of The Mapping of America, considers this map, Nova Virginiae Tabula, to be

one of the most important maps of America ever produced and certainly one of the greatest influence.

He further states, of this specific edition,

In 1694 Petrus Schenk acquired all of the Atlas Major plates at public auction from the heirs of Jansson van Waesberge, and began issuing the maps with his own imprint. This last state of the map [State 2] is uncommon and has no text on the reverse.

The primary differences between this state of the map and previous states are the incorporation of longitude and latitude lines and the inclusion of a Virginia border. It is alto typically vividly colored in a 17th century hand.

To fully understand this map one must first realize that most Europeans believed the Pacific, or at least some great bay that led to the Pacific, lay just a few days travel inland. In the minds of most Europeans of the period, the trade potential for the Virginia colony was entirely dependent upon it being a practical access point to the riches of Asia. Thus the significance of large apparent body of water appearing in the land of the Massawomecks, in the upper right quadrant, becomes clear. Of course, much of this land was entirely unexplored by the European settlers in Jamestown, shown here on the Powhatan River (James River), who relied heavily upon American Indian reports for much of their cartographic knowledge of the Virginia hinterlands. The Masawomecks themselves were a rival of the Powhatan and made their home near the headwaters of the Potomac. These, like many other indigenous groups of the region made only a brief and frequently violent appearance during the 17th century before entirely disappearing, mostly from disease and war, in the early 18th century.

In the upper left quadrant there is an image of the American Indian chief of the Powhatan sitting enthroned before a great fire in his long house. One of the more popular legends regarding John Smith was is capture and trial before the chief of the Powahatan. Smith was convinced that his liberation had something to do with the youthful daughter of Chief Powahatan, Pocahontas, taking a liking to him. Though this grew into a fictitious legend of its own, the truth is more likely that Powhatan saw Smith and his Englishmen as potential allies against the rival American Indian groups, such as the Massawomecks, that were pressing hard against his borders.

This particular edition is known for being the only example of this map in which the American Indian at the right of the map is facing the Chesapeake Bay. Moreover, it is the last published map to follow the Smith/Hondius model. An essential map for Virginia collectors.