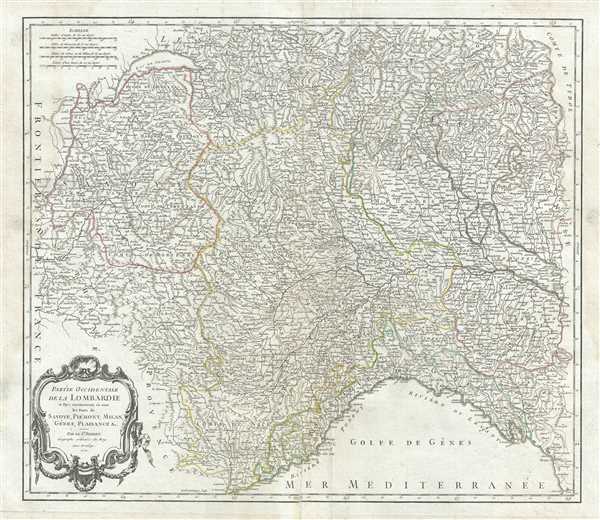 18th century map of the Piedmont wine region of Italy.

This is a scarce 1750 map of the western part of Lombardy in northern Italy by Robert de Vaugondy. It covers from Lake Geneva south as far as Nice and east as far as Pisa and depicts the regions of Savoy, Piedmont, Milan, Genoa and Piacenza. Several important towns and cities, including Nice, Milan, Turin, Genoa, Geneva, among others are noted throughout. The map renders the entire region in extraordinary detail offering both topographical and political information with forests and mountains beautifully rendered in profile.

The region of Piedmont is famous for a variety of Italian wines. The Barola and Barbaresco wines and the sparkling wine Asti, all come from this region. The Duchy of Milan, created in 1395, was a constituent state of the Holy Roman Empire. At the time this map was created, the Duchy was under Spanish control. Following the War of Spanish Succession, Spain would lose many of its territories in Italy, including the Duchy of Milan to Habsburg Austria, until in 1796, Napoleonic forces would conquer it. The Duchy of Milan would eventually cease to exist in 1797, with the signing of the Treaty of Campo Formio.

The map includes a beautifully engraved title cartouche in the bottom left quadrant. This map was drawn by Robert de Vaugondy in 1750 and published in the 1757 issue of his Atlas Universal.

Very good. Some wear and toning with verso repair along original centerfold. Original platemark visible. Some spotting and damp stains near margins.

Rumsey 3353.081. Pedley, Mary Sponberg Belle et Utile: The Work of the Robert de Vaugondy Family of Mapmakers, 335.
Looking for a high-resolution scan of this?