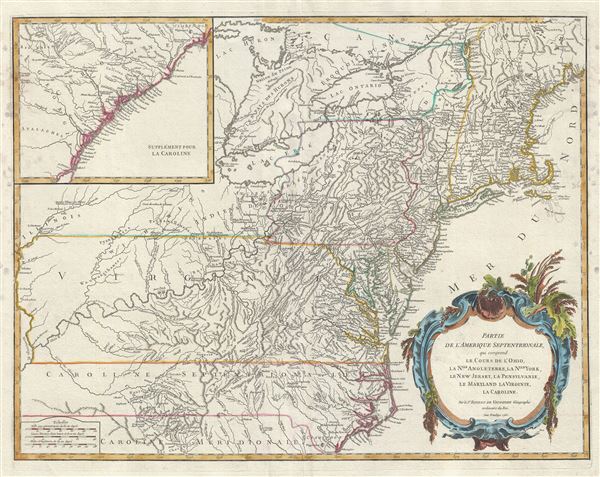 French map issued in the second year of the French and Indian War.

An uncommon first edition first state example of Robert de Vaugondy's 1755 map of the Ohio River Valley and eastern seaboard from Maine to Carolina. The map coves from Lake Huron to Brunswick North Carolina and from the Mississippi River to the Atlantic Ocean. An inset map in the upper right continues the coastline southwards along the Carolina Coast from Cape Fear to Talbot Island. Cartographically much of the information on this map is derived from John Mitchell's iconic map of North America issued earlier in the same year. Vaugondy's English sources are betrayed in that, in many cases, he does not bother to even translate the text into French.

Vaugondy issued this map in the second year of the French and Indian War - a period during which there was considerable interest among the French public in the Americas. The map attempts to illustrate some of the conflicting territorial boundaries. The coast to coast grants in Virginia and North Carolina are represented. Pennsylvania, however, Vaugondy has limited to those lands east of the French Fort Duquesne at the convergence of the Allegheny and Monongahela Rivers - what is today Pittsburgh. Fort Duquesne is situated firmly in English territory, suggesting that even a Frenchman may have realized that he French overstepped their bounds in occupying the important confluence. However, He also identifies several English trading centers well within the bounds of French claims, clearly suggesting wrongdoing by both nations. American Indian villages and territories are noted throughout but especially in the French territories west of the Appalachians.

This map was engraved by Guillaume Delahaye and drawn by Robert de Vaugondy for Vaugondy's Atlas Universal. The map appeared in many editions of the atlas, but exists in only two states, the present, which represent the first edition, and a second state issued in 1768, reflecting the territory changes brought about by the 1763 Treaty of Paris (the treaty that formally ended the French and Indian War resulting in the loss of all French territory in continental North America.)