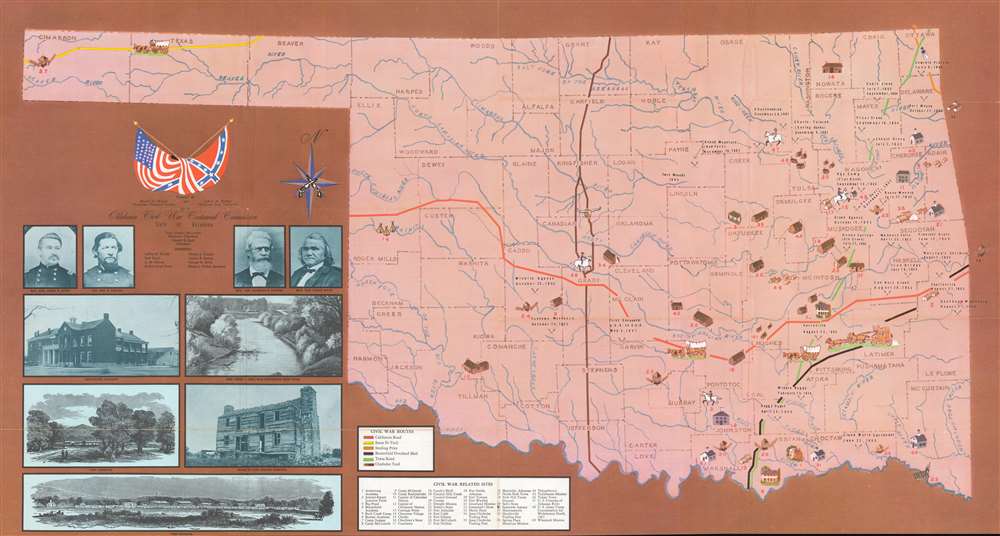 Highlights the events of the American Civil War in Oklahoma, then known as the Indian Territory.
$300.00

This is a 1963 Muriel H. Wright and LeRoy H. Fischer pictorial map of Oklahoma commemorating events of the American Civil War in the Indian Territory. The map depicts the state from Cimarron County and Fort Nichols to Fort Smith, Arkansas and from the Kansas border to the Red River. Forty-nine sites around the state are identified by a small illustration and numbered, with the numbers corresponding to an index situated along the bottom border. Civil War battles from 1861 through 1864 are identified throughout the state, along with the date, and a pair of crossed swords mark the location. Several Civil War routes cross Oklahoma and are referenced here using solid differently colored lines. Rivers and counties throughout the state are also illustrated and labeled. Portraits of four Civil War officers are included to the left of the map. Major General James G. Blunt and Colonel William A. Phillips were Union Army officers while Brigadier General Douglas H. Cooper and Brigadier General Stand Watie fought for the Confederacy. Brigadier General Watie was the only Native American to attain a general's rank in the Confederal Army. Five views are included below the portraits and present the Armstrong Academy, Bird Creek, Fort Arbuckle, the ruins of Fort Gibson Hospital, and Fort Washita.

This map was created by Muriel H. Wright and LeRoy H. Fischer for the Oklahoma Civil War Centennial Commission and was published by the Oklahoma State Highway Commission in 1963.

Muriel Hazel Wright (March 31, 1889 - February 27, 1975) was an American historian, cartographer, editor, and teacher. Born in Lehigh, Choctaw Nation, Indian Territory, her mother, Ida Belle Richards, was a Presbyterian missionary teacher and her father, Dr. Eliphalet Nott Wright, was a Choctaw and a graduate of Union College and Albany Medical College in New York. Wright was proud of her biracial heritage. Throughout her life Wright was active in Choctaw Nation policy making. She served as the secretary of the Choctaw Committee during the 1920s and in 1934 was a member and secretary of the Choctaw Advisory Committee. In the late 1930s and early 1940s Wright served as a Choctaw delegate to the Intertribal Indian Council. Muriel Wright was educated in Norton, Massachusetts at Wheaton Seminary and returned to Lehigh in 1910. In 1912 Wright completed a teacher education course at East Central Normal School but never received a degree. Nonetheless, she held positions as principal and history and English teacher in various schools in southeast Oklahoma. She studied English and History at Barnard College at Columbia University in 1916-17. Wright joined the Oklahoma Historical Society in 1922 and began wrote articles for The Chronicles of Oklahoma from 1923 until 1971. She began performing all editorial duties for the journal in 1943 but did not officially receive the title of editor until 1955. Her book A Guide to the Indian Tribes of Oklahoma is still an important text for those studying the Native Americans of the region. She retired in 1973 and died of a stroke in 1975. Learn More...


LeRoy Henry Fischer (May 19, 1917 - March 11, 2014) was an American historian and veteran. Fisher was born in Hoffman, Illinois and attended a one room school in Hoffman before graduating from high school in Centralia, Illinois. Fischer received his Ph.D. in history from the University of Illinois and immediately joined the U.S. Army Signal Corps to serve in World War II. He served as a cryptanalyst at Bletchley Park, England, for two years, four months, and twenty one days as a member of Ultra, the team working on the German Enigma code. After the war, Fischer taught at Ithaca College before accepting at position at Oklahoma State University in Stillwater, Oklahoma, in 1946. He spent the next thirty-eight years at OSU and specialized in American History and the American Civil War in the Indian Territory. He retired as the Oppenheim Professor of History. Fischer was also an active member of the Oklahoma Historical Society, serving on its Board of Directors for forty-three years. He married Martha Gwendolyn Anderson in Stanton, Iowa on June 20, 1948, with whom he had three children. Learn More...