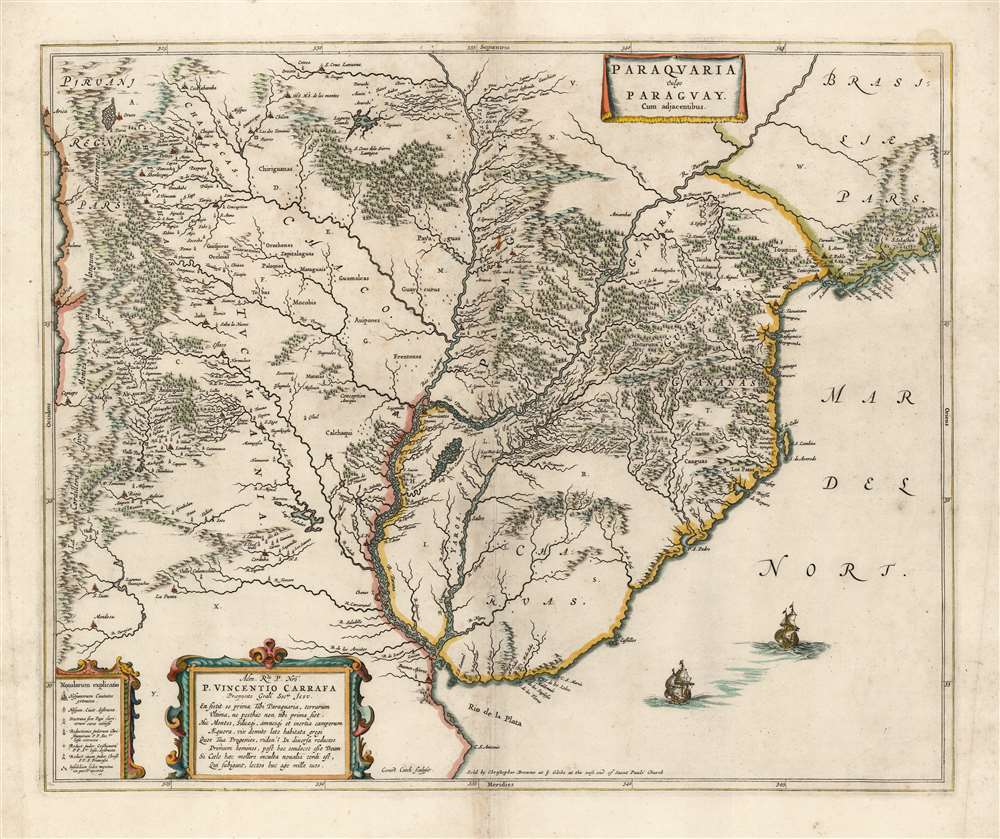 Extremely Rare Imprint of one of Blaeu's Rarest Maps.

This rare, superb Blaeu map is one of the finest maps of the lower Rio de la Plata, and the first map to name the Uruguay River. It covers what is now Uruguay, Paraguay, northern Argentina, and part of Chile in magnificent detail, illustrating the complicated regional river system, Argentina's endoheiric lakes, and other bodies of water appear. Some, for example the Lago de los Caracaras flowing into the Corriente River, depict areas accurately that remain poorly mapped today. (The Caracaras would appear to be the Itatí Lagoon.) Mountains and highlands are shown pictorially. Numerous settlements and missions are named. With the assistance of a key in the lower left, one is able to differentiate indigenous settlements from Spanish cities (both extant and ruined,) clerical schools, Jesuit missions (both extant and ruined,) and Franciscan missions.

The Blaeu Atlas Novus had throughout its long publication history contained a map of central South America, Paraguay, o Prov. De Rio De La Plata cum regionibus adiacentibus. While a beautiful map in its own right, it was both broader in scale and more primitive in its detail than the present work. Joan Blaeu's new map focused more sharply on the region south of the 20th parallel, and did so in far more granular detail - which can only have been provided by the Jesuit missions established there. Thus, justifiably, this map has long been considered a milestone. The Brazilian diplomat and scholar José Maria da Silva Paranhos Júnior listed this among important historical documents pertaining to the history of South American borders in his country's submission to the United States' arbitration of the September 1889 treaty between Brazil and the Argentine Republic. Of this map, Paranhos said:

The first map on which the Uruguay River appears under this name is the one the Jesuits of Paraguay offered to Father Carafa, General Prefect of the Society of Jesus from 1645 to 1649. It was engraved in Amsterdam by Gerard Coeck for Volume XI from the Atlas Maior by Joan Blaeu, published in Amsterdam in the year 1662. It is very valuable and the best of the Jesuit maps for studying the history of the Missions in the 17th century and understanding the texts of Duran, Montoya, Techo and other Jesuits, and very interesting for the abundance of geographic information it presents for the first time, indicating all the great features of much of the interior of South America.

The map is moreover a beautifully engraved work, with elegantly framed cartouches, pictorially rendered forests and mountains, and two finely-executed sailing ships. The map includes a dedication, in verse, to Vincenzo Carafa (1585 - 1649), the seventh Superior-General of the Society of Jesus. (It is unknown whether the dedication was made during the Superior-General's life, or whether it was a valedictory added by Blaeu after the death of the map's engraver.)

The map was engraved by Gerard Coeck at the order of Joan Blaeu, which leaves unexplained the gap of over ten years between Coeck's death in 1645 and the first atlas appearance of this map in the 1658 Dutch Atlas Novus. It is among the rarest of Blaeu's maps, appearing in only one edition of the Atlas Novus and thereafter in the four editions of his masterpiece Atlas Maior. Following the destruction by fire of the Blaeu firm in 1672, this plate was among those sold to other mapmakers. We have not seen, but are aware of reference to a 1688 issue of this map by De Ram (no plate change noted). The plate was thereafter acquired by London mapmaker Christopher Browne, who removed Blaeu's imprint and added his own. As early as 1700 the plate returned to Amsterdam to be put in service by Peter Mortier. This c. 1690 Browne issue is the scarcest acquirable state. We see no examples of this map in OCLC (with Browne's imprint but lacking those of Mortier or Covens and Mortier). Eight Mortier editions are so listed. Only ten examples with the Blaeu imprint are listed in institutional collections.


Gerard Coeck (1608-1645) was a Dutch engraver. Nothing is known of his training, and he died young at 37. Nevertheless, he was prolific, producing maps for Joan Blaeu, Pieter Goos, Jan Jansson, and Claes Janssen Visscher. Much of his output appears to have languished beyond his death. The map of Paraguay he engraved for Blaeu, for example, did not appear in an atlas until 1658. Many of his engravings remained in print unchanged well into the 18th century, a testament to the quality of his work. Learn More...

Very good. Reinforced at centerfold and some areas of wear. Else excellent condition with generous margins and fine hand color. No verso text.