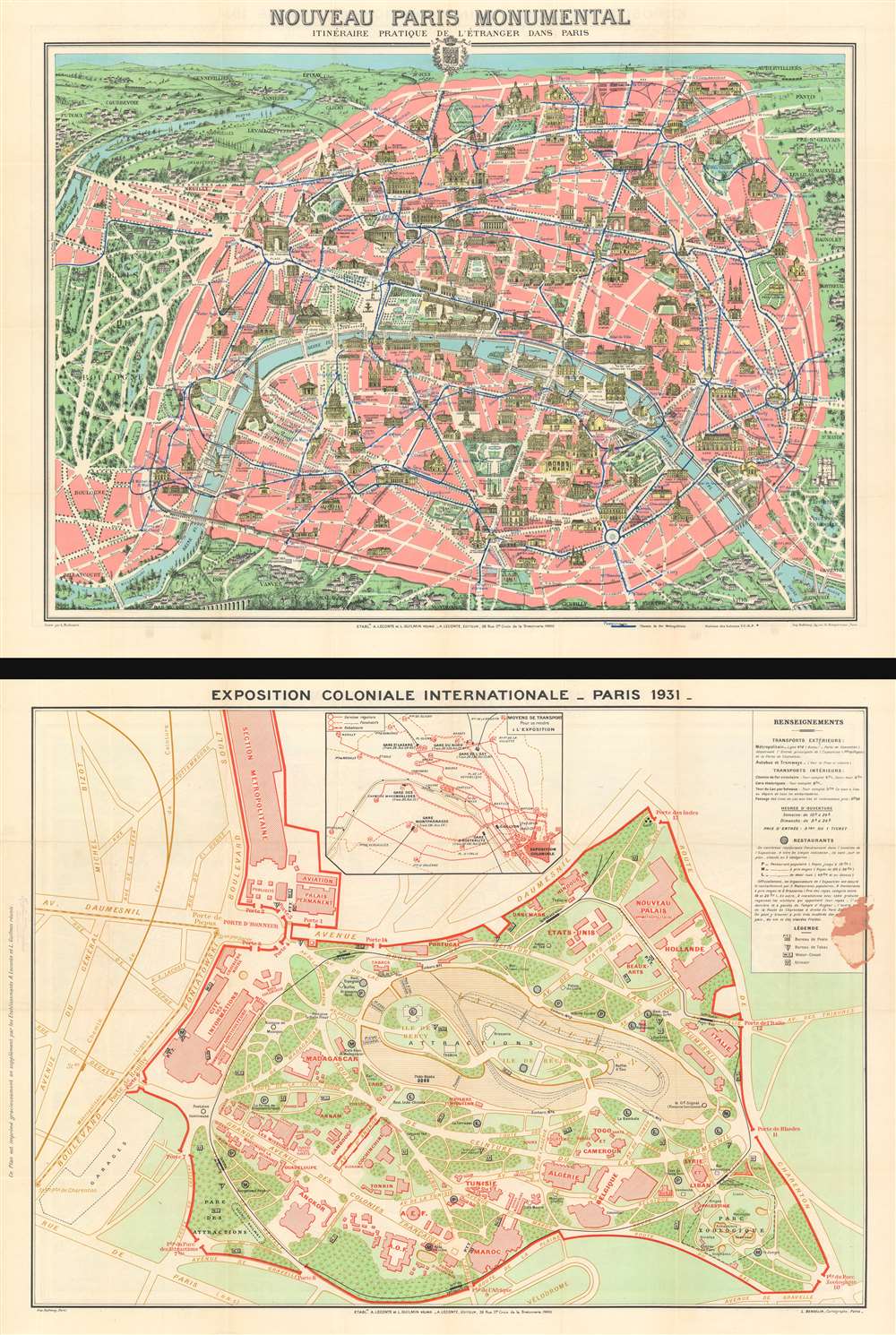 Includes a detailed plan of the Paris International Colonial Exposition on verso - which included a reconstruction of Angkor Wat.
$350.00

This is a 1931 Leconte and Guilmin pictorial map of Paris with a map of the 1931 Paris International Colonial Exposition on the verso.

The pictorial map of Paris depicts the city from the Bois de Boulogne to the Bois de Vincennes, where the Colonial Exposition was being held. Parisian suburbs are labeled on all four sides, some of which are marked by houses and other buildings drawn in profile. The highlight of the map is, of course, Paris's many wonderful buildings drawn in profile, providing the tourist with a beautiful and practical souvenir. The Louvre, the Arc de Triomphe, the Eiffel Tower, Sacre-Coeur, and many other sites throughout Paris are highlighted. Paris's many churches and cathedrals, including Notre Dame and St. Germain-des-Près, are celebrated, as are the city's incredible parks, the Jardin du Luxembourg, the Jardin des Plantes, and the Parc des Buttes-Chaumont. The city's subway network is also illustrated, with the lines and the stations shown in blue.

The 1931 Paris International Colonial Exposition was a project nearly 25 years in the making. Planning for the exposition began in 1906, and, between opposition from the rest of France to yet another exposition being held in Paris, and the First World War, the exposition was not opened until May 1931. Held in the Bois de Vincennes and constructed around Daumesnil Lake, the exposition was the largest world's fair ever attempted in Paris, covering over 500 acres. The 1931 Paris International Colonial Exposition also has the distinction of being one of the few, if not the only, international exposition held in Paris that did not feel crowded. It was also an architectural marvel, with reconstructions of indigenous architecture from all over the world presented to the French people. Among these were monumental thatched-roof buildings designed by French architects after African huts and a reconstruction of Angkor Wat. A railroad encircled the whole exposition, allowing visitors to ride around the outside and view the architecture in relative comfort.

Even though it was billed as an 'international exposition', and numerous European countries and the United States had pavilions there, the exposition's stated goal was to impress upon the French people the glory of their empire and that it worked for them, while emphasizing the French colonial philosophy of the 'civilizing mission'. This meant that, by far, the exposition's focus was on French colonies, with areas devoted to French Indochina, Algeria, Tunisia, Madagascar, and Morocco. The French also imported colonial people to inhabit these pavilions, to give them a more 'local' feel. In the end, this exposition was one of the most successful in French history, with over 8 million visitors and a profit of over 33 million francs.

This map was published by Leconte and Guilmin and printed by the Imprimerie Dufrénoy in 1931. The map of the Paris International Colonial Exposition was created by L. Bergelin. Monumental maps of Paris had been published in various forms beginning in the 1880s.


L. Bergelin (fl. c. 1930 - c. 1972) was a French cartographer active during the mid-20th century. He produced many different kinds of maps, including school wall maps, world maps, and city plans, notably of Paris. He also was responsible for the Peugeot road atlas beginning in 1938. Learn More...

Very good. Even overall toning. Light wear along original fold lines.Area of discoloration where previously attached to cardboard binder. Pictorial map of Paris on recto and map or plan of 1931 Colonial Exposition on verso.
Looking for a high-resolution scan of this?