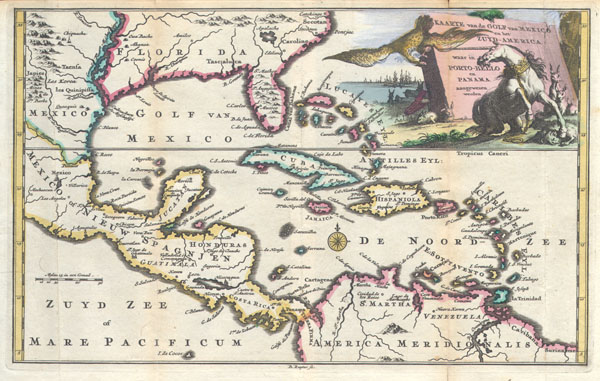 Engraved by Balthasar Ruyter, this is an extremely rare and highly unusual 1747 map of Mexico, the Caribbean, the West Indies and Florida. Covers from roughly Michoacán Mexico, west to Surinam, north as far as modern day Virginia and south as far as modern day Ecuador. The cartography exhibited here almost certainly references the important 1698 map of North America attributed to Friar Hennepin. The mouth and course of the Mississippi River are displaced far to the west of their actual location and are shown roughly where Galveston Harbor and Sabine Lake are now. Roughly where the actual mouth of the Mississippi is located, this map suggests a large bay which it calls 'Baye de Spirito Sancto.' Florida is misshapen with no trace of the Keys. Further south, the West Indies are fairly well mapped suggesting a relatively accurate picture of the islands. Following the lead of Bleau and Hondius, the mainland of Mexico and Central America is wildly exaggerated along the horizontal. Yucatan is also extremely misshapen. In the north, the lake of Apalache, which first appeared in Jacque Le Moyne's early 17th century map of Florida, is shown as the source of the St. John's River. In today's Texas, this map notes several mines and Indian villages including a stylized teepee. Expanding upon Hennapin's work, Ruyter includes a number of bays in southwestern Florida and adds the Negrillos Islands. The fascinating allegorical title cartouche in the upper right quadrant of this map deserves special attention. In a departure from the traditional iconography for America, (American Indians, sheep, bears, buffalo, etc. ), there appear a unicorn killing a ram, an eagle, a couple of jack rabbits, and a naval fleet. Ruyter was no doubt inspired by the 1671 work of Arnold Montanus, 'The New and Unknown World,' in which eagles and unicorns appear as the indigenous fauna of North America. In the background, the fallen pillars and naval armada most likely refer to the annual arrival in Porto Bello of the Spanish treasure fleet from Europe via the Pillars of Hercules. This map was originally prepared for inclusion as chart no. 21 in Ratelband and Gerrevink's extremely rare 1747 Dutch hand atlas Geographisch-Toneel, Of uitgezochte Karten Tot Gemak der Officieren, Reisigers en Liefhebbers…'