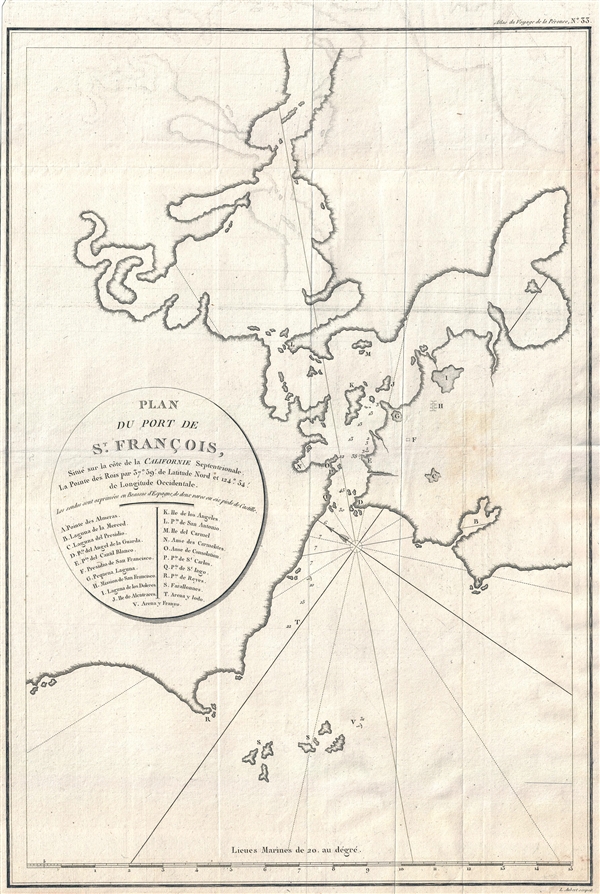 A fine example of La Perouse's important 1797 map of San Francisco Bay. This is the earliest obtainable map of San Francisco Bay. The map may seem a little hard to decipher by modern standards. It is oriented to the Northeast, the peninsula emerging from the right is the location of the modern urban center of modern Francisco, with the Golden Gate being the tiny entrance into he larger bay. The general form of San Pablo Bay, which leads into Suisun Bay is evident at the top of the map. The greater part of San Francisco Bay, extending towards the right side of the map is significantly truncated. The map identifies 21 place names, including Alcatraz, the Presidio, Merced, the Mission of San Francisco, and other landmarks, alphanumerically via a table integrated into the title cartouche.

La Perouse, on his great around the world voyage, passed San Francisco Bay on September 10 while coasting southwards on his way to Monterrey, the last stop before heading out across the Pacific towards Manila and the Philippines. La Perouse did not personally survey the Bay, instead he most likely obtained the data for this map from the Spanish pilot Francisco Antonio Mourelle de la Rúa (1750-1820) in Manilla. Cartographically the map is similar to the Dalrymple Plan of 1789, which itself is based on the charts of Don Jose' de Cañizares (1776) and José Camacho y Brenes (1779 and 1785).

La Perouse died tragically on a shipwreck near the Solomon Islands. His journals were shipped back to Europe from Australia before the shipwreck and posthumously published in 1797, along with an accompanying atlas volume, from which this map was drawn, Atlas du voyage de La Perouse.