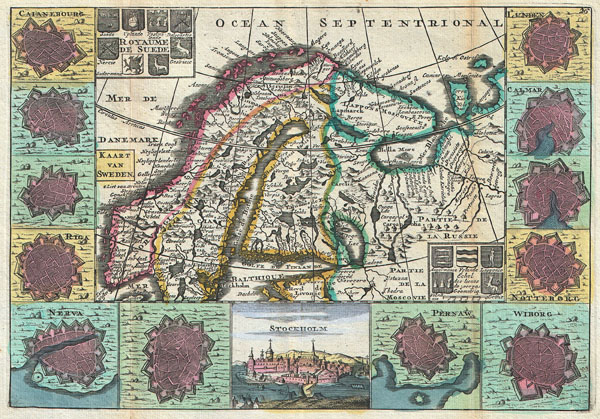 A stunning map of Scandinavia first drawn by Daniel de la Feuille in 1706. Covers all of Norway, Sweden and Finland along with parts of modern day Latvia, Estonia and Russia. Surrounded by 12 overhead plans of important Scandinavian cities. From top left: Caianelbourg, unnamed, unnamed, Riga, Nerva, unnamed, Pernaw, Wiborg, Notteborg, unnamed, Calmar, and Lunden. At the bottom center there is an appealing view of Stockhom. Upper left quadrant features a small title cartouche with the title in French surrounded by seven armorial crests. Five more armorial crests appear in the lower right quadrant. Dutch language title, center left. This is Paul de la Feuille's 1747 reissue of his father Daniel's 1706 map. Prepared for issue as plate no. 32 in J. Ratelband's 1747 Geographisch-Toneel.

National Library of Estonia, ID 945.
Looking for a high-resolution scan of this?