1861 U.S. Coast Survey Chart or Map of the Coast of Georgia and South Carolina 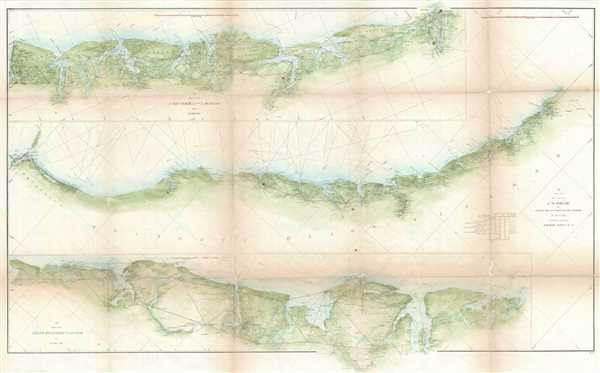 1861 U.S. Coast Survey Chart or Map of the Coast of Georgia and South Carolina

This is an appealing 1861 U.S. Coast Survey triangulation chart or map of the Georgia and South Carolina coastline from Cumberland Island to Bald Head Island in North Carolina. E essentially three maps on a single sheet, the top map features a triangulation of the coast from Bull’s Island to Savannah River. The bottom map extends from Ossabaw Island to Cumberland Island. The center map focuses on the coastline from Cumberland Sound in Georgia to Cape Fear in South Carolina. Focuses on the inlets and waterways, indicates, lighthouses and important channels and shows the progress of the survey work in this area by date-annotated sections. Nautically this map offers a wealth of practical information for the Mariner, including countless depth soundings and notes on light hoses, tides, shoals, and other undersea dangers.

This map was compiled under the direction of A. D. Bache, Superintendent of the Survey of the Coast of the United States and one of the most influential American cartographers of the 19th century, and issued in the 1861 edition of the Superintendent's Report.