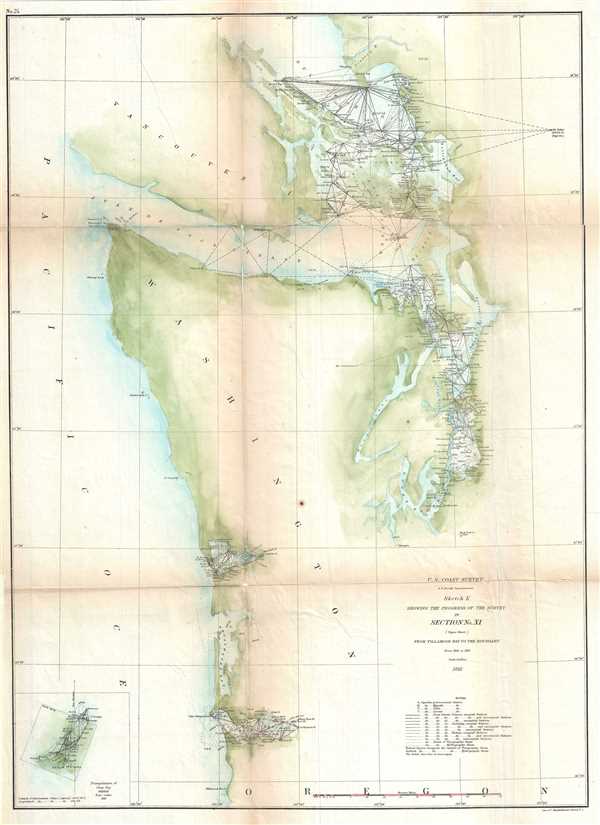 This is an uncommon hand-colored 1861 U.S. Coast Survey map and triangulation chart of Washington, Vancouver and the Puget Sound from Tillamook Head to Vancouver Island, including Juan De Fuca Strait, the Puget Sound, Olympia, and Seattle. Details from the Columbia River North along the Washington Coast to Cape Flattery and Vancouver Island. Shows the Strait of Juan de Fuca as well as Puget Sound and Washington Sound. Names numerous points along the coast though Seattle is not one of them. Prepared under the supervision of A.D. Bache, Superintendent of the Survey of the Coast of the United States from 1843 to 1865 and one of the most influential American cartographers of the 19th century This map was included in the 1861 edition of the Report of the Superintendent of the U.S. Coast Survey.

Good. Some wear along the original fold lines. Toning throughout with some discoloration along folds. Map exhibits creases throughout with splits along folds, repaired. Flattened and backed with archival tissue. Minor spotting.
Looking for a high-resolution scan of this?